After a successful hydro test, steam-up is now on the horizon 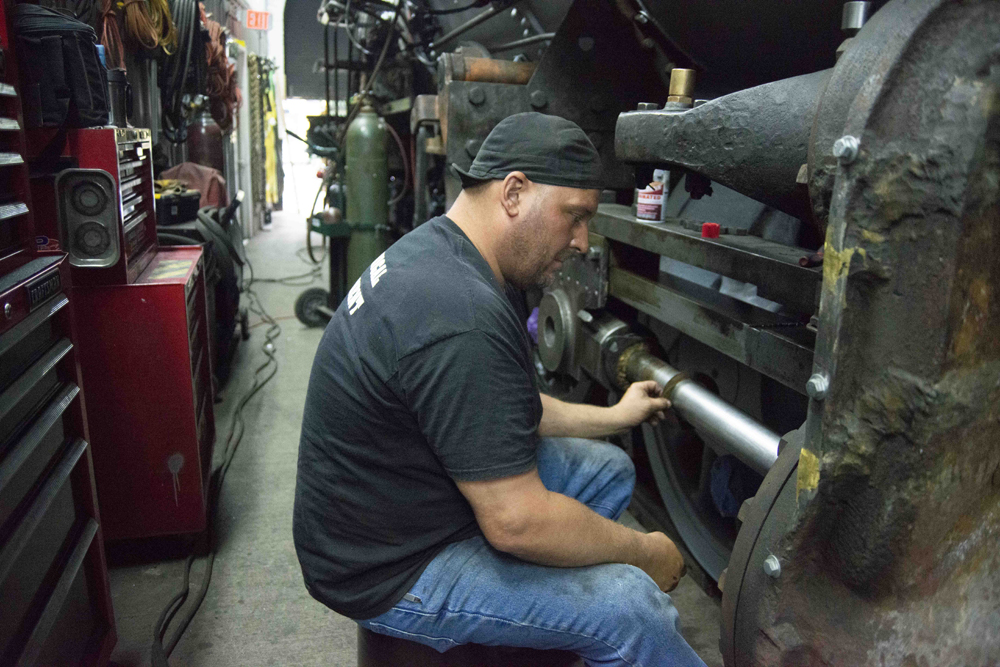 ROCKHILL FURNACE, Pa. — Out of service for 66 years, East Broad Top narrow-gauge 2-8-2 Mikado steam locomotive No. 16 is getting close to operating again.

Built for EBT by Baldwin Locomotive Works in 1916, it’s one of six surviving BLW Mikados on the roster of the iconic short-line railroad in central Pennsylvania, which has been undergoing a revival since it was bought two years ago by the non-profit EBT Foundation, Inc.

On May 17, the boiler and firebox passed a Federal Railroad Administration-mandated hydrostatic test, although typical government jargon doesn’t state it that plainly. The FRA inspector deemed the test to have produced “satisfactory results with no exceptions.” Out of hundreds of staybolts, only four showed minor leakage, an insignificant percentage.

In the test, pressure was pumped up to 250 psi, or a required 1¼ times the maximum operating pressure, which for No. 16 is 200 psi, according to Dave Domitrovitch, EBT’s master mechanic. That exercise was followed by an internal inspection, which includes hammering on bolts and welds to test their integrity. The FRA also “scoped,” or inspected, the mud ring, which is at the bottom of the firebox, and reviewed the pressure-vessel calculations on the federal Form 4 certificate.

“They took no exceptions,” said Domitrovich. “They were happy with our paperwork.”

Among the recent tasks performed on the 81-ton engine are the rebuilding of the blowdown mechanism, and the re-use of a blowdown lever mechanism removed from sister engine No. 18 (Baldwin, 1920). Other work has included construction of new oak running boards, and installation of packing glands for the piston rods, found in the shops as new-old stock, left over from EBT’s common-carrier days.

A small amount of piping work was handled by FMW Solutions, a consulting engineering firm widely known for advising other steam-locomotive restoration projects. These include U.S. Sugar Co. 4-6-2 engine No. 148 in Florida (Alco, 1920); Nashville, Chattanooga & St. Louis 4-8-4 engine No. 576 (Alco, 1942); and, closer to home, Pennsylvania Railroad K4s-class 4-6-2 engine No. 1361 (PRR Juniata Shops, 1918) at the Railroaders Memorial Museum in Altoona, Pa.

Another job was the installation of a second sight glass on the fireman’s side of the cab. Mounted on the boiler backhead, a sight glass is a safety gauge that shows the level of water in the boiler. Failing to maintain an adequate level can lead to failure of an internal steel component (the “crown sheet”), causing a usually fatal explosion. FRA mandated redundant gauges after a 1995 boiler explosion on the Gettysburg Railroad brought intense scrutiny to steam-operated tourist railroads. The National Transportation Safety Board’s investigation uncovered loose operating practices, weak maintenance, and inadequate training. Among its several recommendations was the mandate for a second sight glass.

“The boiler work is done,” Domitrovich says. “Next will be timing the engine and finishing the air-brake work.” Timing refers to adjusting the valves to allow proper and efficient admission and exhaust of steam to and from the cylinders.

After that, the steel cab will be reinstalled, heat-resistant stove paint will be applied to the firebox (EBT never used graphite, as many other railroads did), and stainless-steel boiler-jacket panels will be applied and painted.

With mechanical work on the tender done, it has been painted with a flat-black base coat. A finish coat and orange “E.B.T.” lettering will complete the job.

For achieving the work to date in such a short time (some steam restorations take five or 10 years), Domitrovich credits his crew: Josh Capp, Derrick Erwin, Alex Esposito, lead welder Matt Struble (formerly of Norfolk Southern’s Juniata Locomotive Shop), and Eric Turner. He also acknowledges “the huge amount of help I’ve received from my former Strasburg [Rail Road] supervisors Linn Moedinger and Rick Musser, among many others I’ve worked with over the years.” Moedinger, retired as president of Strasburg, is now a member of the EBT Foundation board.

No. 16 was one of the last engines to operate for the coal-hauling EBT when it was closed in 1956. It’s one of the three largest and heaviest engines on the roster (Nos. 16-18), all of which use superheated steam and piston valves. Three earlier, lighter engines, Nos. 12, 14 and 15 use older slide-valve technology.

The railroad reopened in 1960 as a tourist-hauling carrier on 4-1/2 miles of its original 33-mile line, starting with Nos. 12 and 15. Over the next several years, EBT also restored Nos. 14 and 17 to operating condition. EBT closed again in 2011 and lay dormant for eight years. In 2020, the EBT Foundation, Inc., was formed to buy the majority of it – 27 miles of main line, the six steam engines, freight and passenger cars, and historic shops, station, and roundhouse.

EBTF revived scheduled public passenger service in 2021, using a diesel locomotive to start. Its staff evaluated the six steam engines and found that many of them were well-worn from being run during the tourist era. Nos. 16 and 14 were found to be the best candidates for an early return to service, and work began immediately, focusing on No. 16.

The railroad opened its 2022 season on May 6 with a diesel locomotive, but that will change when No. 16 is steamed up. Through August, EBT is running five days a week, Wednesdays through Sundays.

A National Historic Landmark, EBT later this year will mark the 150th anniversary of the start of its construction in 1872. For more about the railroad, the EBT Foundation, and the volunteer Friends of the East Broad Top, see www.eastbroadtop.com and www.febt.org.

— Updated at 8 a.m. to note Linn Moedinger is a member of the EBT Foundation board.