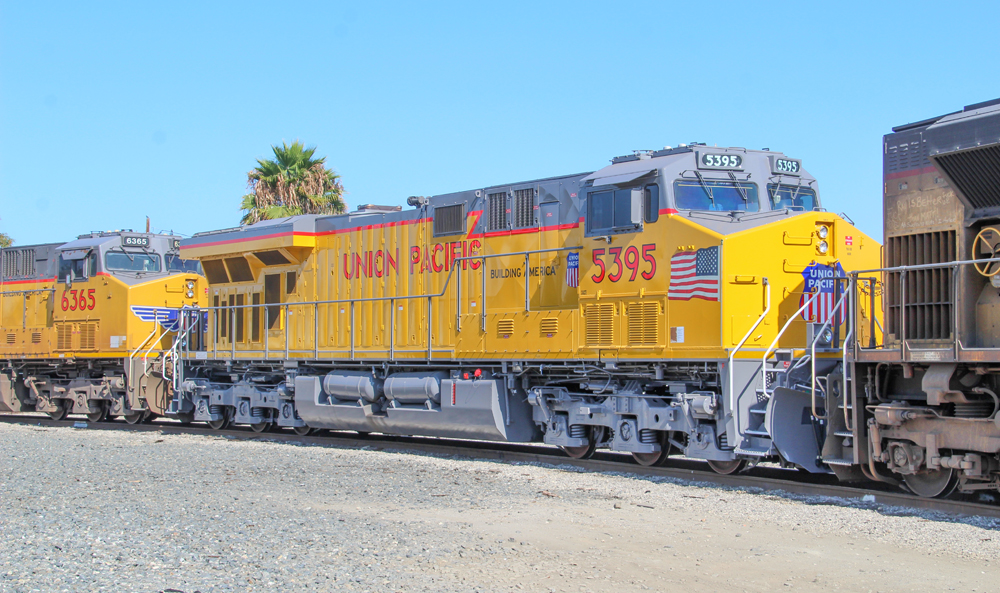 OMAHA, Neb. — Union Pacific is making the biggest change to its locomotive paint scheme in more than 20 years.

It’s by no means a radical change. The traditional Armour Yellow and gray with red trim remains. But departing is the large American flag decal on the long hood. A smaller flag will be placed on the side of the locomotive nose, ahead of the cab. Arriving, or returning, is red “Union Pacific” lettering on the long hood, a standard feature for much of the diesel era.

The flag decal was introduced to the sides of the locomotives in 2001 in memory of the 9/11 attacks, along with the UP shield and “Building America” slogan.

“That’s a really big decal,” says Shane Keller, UP’s senior vice president, engineering and mechanical. “And while we like that, the place we stuck it is on the carbody doors. Over time, what we’ve learned is that not only not the easiest place to do the install, but the heat generated by the engine has not been friendly to what a decal or a sticker for both longevity and, really, appearance.”

As any observer of UP locomotives can attest, those decals can often end up looking a bit, well, worse for wear.

And, in fact, it was employees who drove the process of coming up with a new design.

“The people who do the installs said, ‘How about you let us take another shot at this?’” Keller says. “What they said was the flattest canvas you have on the road locomotives is up on the nose. Let’s put the flags where they belong, in the lead, and let’s design something that’s easier to maintain and still is very respectful and honors our history and the mission of building America.”

That left a big space on the carbody, providing the opportunity to return the large “Union Pacific” lettering.

“That’s a little bit retro, if you know what I mean,” Keller says.

While one retro element returns, another departs. The winged UP shield on the nose — which was introduced in 2000, and harkens back to the design used on the railroad’s streamlined passenger locomotives — is being replaced by a larger, wingless shield.

“To us, to the people making the decisions, [the wings] didn’t look as good with where we placed the flags,” Keller says. “… What happened is the wings ran right into the flag, and we didn’t feel good about that.

“The shield takes center stage. The two things that are important there are that you’ve got the UP shield, and you’ve got our history, our mission. The shield and the flags are both up front. If somebody sees a locomotive coming at a crossing, those are the two things they’re going to see first.”

The design process took about six months, Keller says. The new look will be introduced very gradually to the road locomotives in the railroad’s fleet of more than 7,000 units.

“Anything that gets paint — which for now, is our modernized locomotives, our overhauled locomotives, and it could be something from accident damage — will be getting the new paint scheme,” he says.

UP locomotives which have been undergoing modernization at Wabtec’s Fort Worth, Texas, plant, are still receiving the old scheme while the new design was worked out, but will be transitioning to the new look shortly, Keller says.

He was a little surprised how quickly the first redesigned unit was spotted. Photographer Bruce Jacobs caught the repainted No. 5395 in Anaheim last week.

“You guys are quick, that’s all I’m going to tell you,” Keller said.

And as the new-look units begin to circulate, Union Pacific invites photographers to tag it (@Union Pacific) on social media, so the railroad can see where the engines are being spotted.