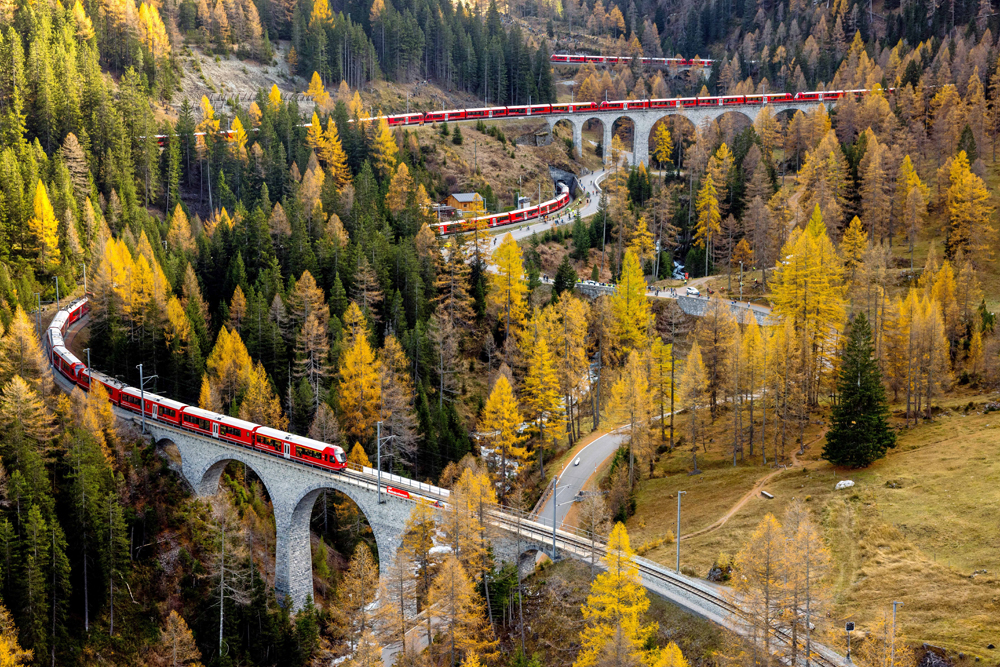 The train ran on the world-famous UNESCO World Heritage ‘Albula/Bernina’ route from Preda to Bergün via its spiral tunnels, later crossing the famous Landwasser Viaduct before ending in Alvaneu. The record-breaking run was part of the celebration of the 175th anniversary celebrations of the Swiss railway network and the 100th anniversary of the electrification of the Rhaetian Railway network.

The equipment involved in the record was all built by Stadler in Switzerland and delivered in the last two years. They are known as “Capricorns” after local mountain goats of the same name (also known in English as Ibex). The RhB Capricorn fleet is replacing all of the company’s older EMUs and most of its large fleet of locomotive-hauled cars. The last Capricorn trains should be in service by 2024.

Between the 25 EMU units involved, the train had seven engineers onboard (not all in the lead EMU) and 21 other technical staff .plus hundreds of passengers.

Thousands of local people and visiting railfans lined the trackside to photograph the special train, although the best views were available from the air for the official photographers.

The previous world record for longest passenger train  — which remains the record for the longest train pulled by a single locomotive — was set in Belgium on April 27, 1991, when an electric locomotive pulled 70 cars from Ghent to Ostend. This was also a specially organised event, although unlike the 2022 record it was done almost at sea level.

Video of the train (with very enthusiastic Swiss commentary) is available here.