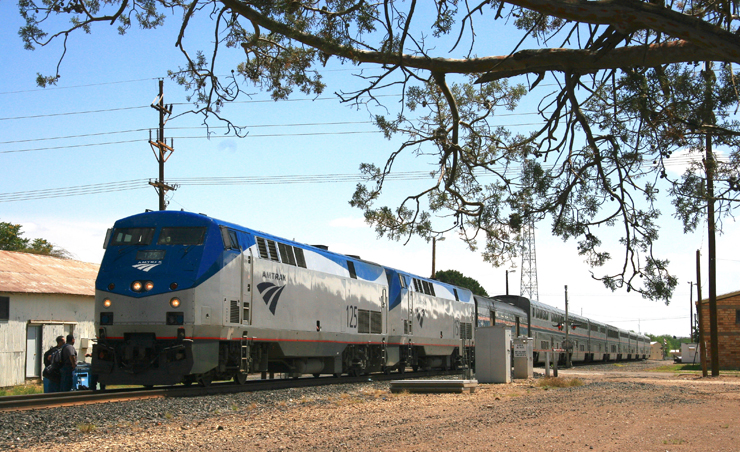 The Westbound Sunset Limited pauses at Alpine, Texas, in May 2016. The Sunset will be reduced to twice-weekly operation for a seven-week period beginning Jan. 20.
Bob Johnston 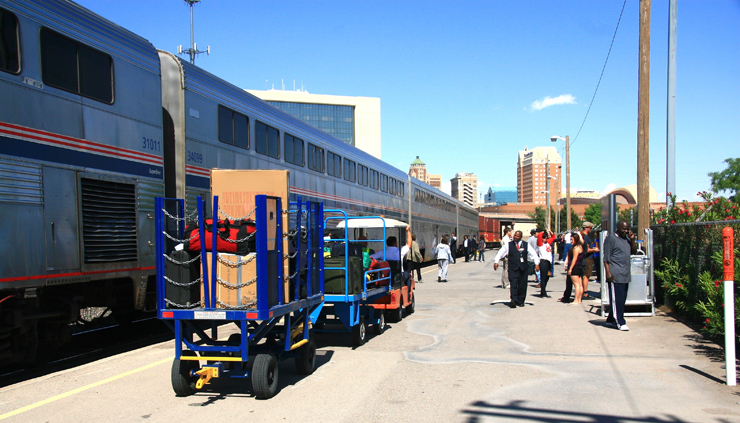 SAN ANTONIO, Texas — The Sunset Limited will begin seven weeks of reduced frequencies and adjusted schedules later this month as a result of a major track project in Texas.

To accommodate the track rehabilitation between San Antonio and El Paso, Union Pacific’s work is requiring Amtrak to cancel one of the three weekly Sunset Limited round trips and lengthening schedules on the other two trips. The changes, which also impact connecting service to and from Chicago on the Texas Eagle, begin Jan. 20 and run through March 9.

It is not the only significant cancellation faced by Amtrak long distance trains in January. Beginning Monday, Jan. 7, Crescent service between New Orleans and Atlanta will be cancelled Mondays through Thursdays, a disruption lasting through Feb. 14.

The Sunset changes mean there will be no westbound departure from New Orleans on Mondays, and no eastbound train leaving from Los Angeles on Sundays, so there will be no eastbound service for a four-day period and no westbound trains for a three-day span. On the Texas Eagle, the through cars that depart Chicago on Sundays, normally bound for Los Angeles, will only operate as far as San Antonio.

On the Sunset’s remaining days of operation, Wednesday and Friday departures from Los Angeles Union Station have been pushed up to 7:26 p.m. from 10 p.m., thus breaking the normal connection with the arriving Coast Starlight. This is to accommodate a lengthened schedule between El Paso and San Antonio, while keeping the connection with the Eagle. This means the  Sunset’s eastbound departure time at Tucson during snowbird season shifts from 9:15 a.m. to 5:41 a.m. A similar lengthening occurs westbound after El Paso, moving the Los Angeles arrival back three hours to 8:40 a.m.

Union Pacific did not respond in any way to Trains News Wire inquiries about the exact location and nature of trackwork, whether the railroad proposed a different route or schedule to keep the train running, or how it plans to keep freight traffic moving through the construction area.

Expanded running times through west Texas on the remaining round trips, however, suggest work is mostly taking place between El Paso and San Antonio, a 600-mile stretch over a mostly single-track railroad that involves a combination of overnight and daytime running. Amtrak spokesman Marc Magliari tells Trains News Wire that the agreement was only finalized last week.

Amtrak is not providing alternate transportation. Because the cancelled trains normally pass each other overnight west of San Antonio, the company could have preserved tri-weekly operation on the rest of the route by turning the trains there and at El Paso, but that would require a 12-hour, partially overnight bus ride for through passengers along U.S. Route 90, which Amtrak officials deemed impractical.

Nevertheless, the decision further reduces the value of the train for the many travelers who use the Sunset for shorter segments. For instance, Trains News Wire discovered that the westbound train arriving into Los Angeles Friday morning, Jan. 4, was completely sold out in coaches as of last Wednesday between Yuma, Ariz., and Palm Springs, Calif.

Host railroads restrict track projects to daylight hours unless Amtrak wants to fund the lighting equipment and night pay needed for overnight work. This is why the Crescent has faced the Monday-through-Thursday cancellations between New Orleans and Atlanta on Norfolk Southern for several years. During the 2019 work on that route, trains will continue to operate Friday through Sunday, as they have in past years, and Amtrak Thruway buses will cover all regular stops in Alabama, Mississippi, and Louisiana for the duration.