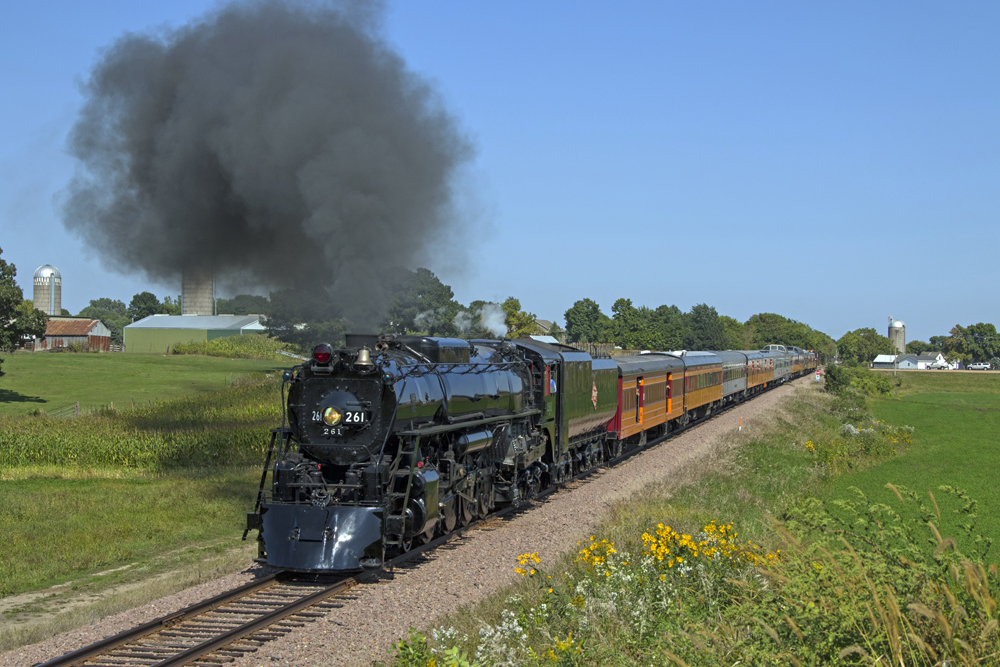 MINNEAPOLIS – The Friends of the 261, the non-profit organization that owns and operates Milwaukee Road S-3 class 4-8-4 No. 261, has launched a study to consider converting the locomotive from coal to oil firing. Friends of the 261 President and Chief Operating Officer Steve Sandberg said the group is conducting a feasibility study and cost benefit analysis for the possible conversion. It could cost up to $200,000 to convert NO. 261 to burn oil, Sandberg said.

If the group decides to proceed, it would not be the first time an S-3 has been changed to burn oil. Milwaukee Road owned ten S-3s built in 1944 and they worked exclusively in the Midwest. The outbreak of the Korean War brought an acute motive power shortage to the railroad as traffic boomed. In 1950, S-3s Nos. 262, 263, 267 and 269 were converted to burn oil and moved to the Idaho Division “gap” in Milwaukee Road’s electrified operations between Avery, Idaho and Othello, Wash. They made the last steam runs on the Idaho Division, with No. 267 making the final trip Dec. 17, 1954.

The Milwaukee Public Library has some of the original Milwaukee Road engineering drawings on file from the S-3 conversions, and long-time Friends volunteer and 261 fireman Ed Selinski has been working with the library to obtain copies of the drawings. The Friends has also solicited input from other steam operators who have done conversions in the past. Union Pacific Senior Manager Heritage Operations Ed Dickens, whose team converted UP Big Boy 4014 to burn oil, is a technical advisor for the project.

In addition to studying oil conversion, other work is being done on the 4-8-4. Rail wheel manufacturer ORX has shipped three new wheel sets to the Friends shop in Minneapolis where they will be installed under No. 261’s tender. Sandberg said while there was nothing wrong with the old wheels, they were last rebuilt almost 30 years ago, in 1992. They were the thinnest of the original wheels and for safety reasons it was decided to upgrade them at this time, Sandberg says. “Thanks to our donors, the 261 organization is using the time during COVID to make improvements to the 261 as well as our fleet of rail cars,” he said.

This year marks the 30th anniversary of the 1991 signing of the lease agreement between the National Railroad Museum of Green Bay, Wis., and North Star Rail, Inc. North Star returned the engine to service in 1993, with the non-profit Friends of the 261 taking over operation in 1995. The group purchased No. 261 from the Museum in 2010.

The Friends plan to have No. 261 back in operation this fall pulling excursions on the Twin Cities & Western Railroad Oct. 2-3, depending on pandemic restrictions. This year also marks the 30th anniversary of TC&W’s 1991 founding.

For more information go to www.261.com.