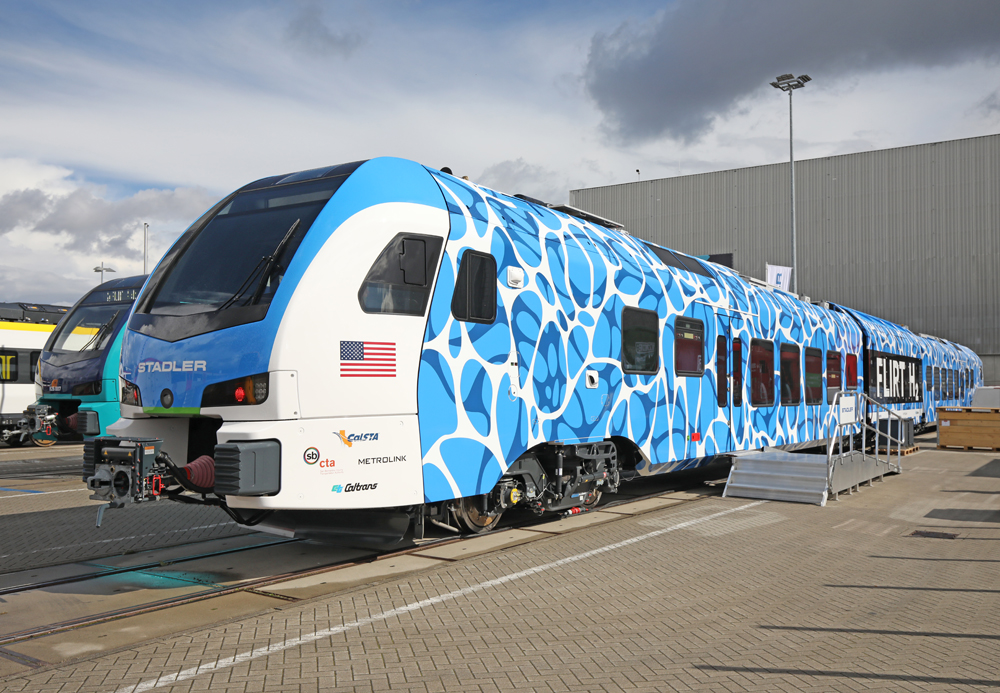 BERLIN — The first hydrogen-powered trainset for use in the U.S. has been presented to its owners at the InnoTrans trade fair by manufacturer Stadler — which also announced an order for more of the equipment for use in Amtrak California intercity service.

The two-car trainset was ordered by the San Bernardino County Transportation Authority in 2019 for use on the 9-mile “Arrow” rail line between the University of Redlands and the San Bernardino Transit Center. The new zero-emission hydrogen-powered multiple-unit (ZEMU) trains will undergo extensive testing in Europe this year and in 2023 before being shipped to the U.S. to enter service in 2024. The Arrow line, currently in testing and projected to open this October, will also use low-emission “Flirt” diesel multiple-unit trainsets supplied by Stadler; the first of these was delivered in March 2022.

Stadler built the train at its factory in Bussnang, Switzerland, which has produced hundreds of previous EMU versions of the Flirt train design. It uses hydrogen fuel cells supplied by Canadian specialist firm Ballard, although the electric power invertors and traction motors are based on those in use in existing EMUs. SBCTA bought the hydrogen-powered train with financial support from California State Transportation Agency (CalSTA) and the California Department of Transportation (Caltrans).

Stadler believes hydrogen will be a viable alternative to existing diesel passenger trains, as well as further electrification of commuter rail routes — which is capital intensive, even if it is ultimately the cheapest way to power trains.

The train’s design features a central power module that contains the hydrogen fuel cells, and the company says it believes this is a better approach than its competitors, as the middle of the train is likely the safest place in the event of an accident. Both Siemens and Alstom build hydrogen-powered trains with fuel cells mounted on the roof of passenger driving cars. To enable passengers to move around the train, a corridor runs the length of the hydrogen center section, although notices in both English and Spanish tell passengers not to linger there.

Stadler and CalSTA also announced a major order for a longer, intercity version of the Stadler ZEMU. It calls for the company to deliver four four-car ZEMUs from its factory in Salt Lake City by 2027, with an option for another 25 trains under a memorandum of understanding signed Tuesday at Innotrans by Stadler, CalSTA, and Caltrans.

California aims to make all its passenger rail 100% emissions free by 2035 and this order and option will be a key part of that effort. The first four new ZEMUs will be used in the Central Valley between Merced and Sacramento, providing connections with the California High Speed Rail route when complete.

The new trains are designed with a 500-mile operating range between refueling. Assuming the option is exercised, the equipment will replace existing diesel-powered, push-pull equipment used for Amtrak California services.

8 thoughts on “Stadler unveils first hydrogen train for U.S., announces order for up to 29 more”