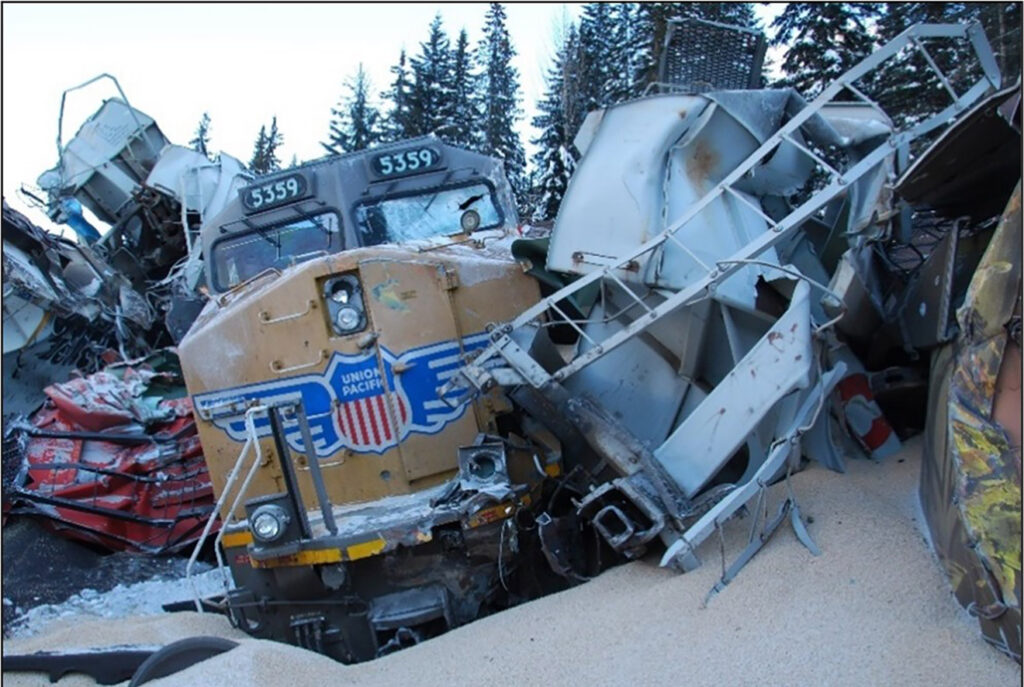 That’s the conclusion of the Transportation Safety Board of Canada, which on Thursday issued its final report on the February 2019 wreck that killed conductor Dylan Paradis, engineer Andrew Dockrell, and conductor trainee Daniel Waldenberger-Bulmer.

In a statement Thursday evening, CP disagreed with the board’s conclusions and vigorously defended its safety culture, as well as the decisions and training of its personnel.

Soon after the accident, Transport Canada and CP each took several steps to modify operating rules on mountain grades in general and the unforgiving Laggan Subdivision in particular during periods of extreme cold. CP also beefed up its locomotive engineer training program and installed a cold wheel monitoring system that resulted in more than 5,000 grain hopper cars being removed from service for brake repairs.

Those actions went a long way toward improving safety, Transportation Safety Board Chairwoman Kathy Fox said at a news conference. But she adds: “It’s obvious that more must be done.”

The board remains concerned that current defenses are not enough to prevent runaways, Fox says. Canada’s transport minister has 90 days to respond to the board’s three recommendations.

The safety agency’s 254-page report outlined the chain of events that led up to the runaway of train 301-349 on Field Hill, where the 13.5-mile grade ranges from 1.7% to 2.2% and includes the Spiral Tunnels.

As usual, the tragedy was the result of a convergence of events that by themselves might not have led to a runaway, officials said.

The 112-car, 15,042-ton train, with three locomotives in 1x1x1 distributed power configuration, passed its No. 1 brake test in Calgary and in the mountains encountered extremely cold temperatures as low as -28 degrees Celsius, or -18 Fahrenheit.

When the entire train was on the steepest part of the descending grade, brakes could not hold it below the maximum 15-mph speed limit. The crew put the train into emergency when the speed reached 21 mph, as CP rules require. The train stopped on the 2.2% grade at Partridge, milepost 127.46.

After consulting a trainmaster, the conductor set retaining valves on 84 cars as part of a “release and catch” plan to release the emergency application and allow the air brakes to recharge as the train continued downgrade.

The trainmaster discounted the crew’s report of increased locomotive airflow, which can be an indication of a leaky brake system. The trainmaster had qualified as a locomotive engineer but had not qualified on the Laggan Sub and thus never received extra training specific to Field Hill, the report says. A road foreman of engines was on duty in Calgary at the time, “but his technical expertise and experience were similar to a trainmaster’s,” the report says.

“The trainmaster’s effectiveness as a technical leader was likely weakened by the mismatch between his experience and the requirements of supervising mountain-grade operations on the Laggan Subdivision,” the report says.

A relief crew was delayed en route and arrived 2.5 hours after the train went into emergency at Partridge. Soon after the relief crew boarded the lead locomotive, the train began to creep forward on its own and accelerated down the grade.

The head end of the train was able to negotiate back-to-back reverse curves and the Upper Spiral Tunnel but derailed at 53 mph in a 9.8-degree curve at milepost 130.6, immediately before the Kicking Horse River bridge. Lead locomotive AC4400CW No. 9538 plunged into the river 35 feet below. The train derailed in three sections, with a total of 99 cars and two locomotives off the rails.

Investigators concluded that prolonged exposure to the extreme cold, which causes leaks around rubber gaskets and seals in air brake cylinders, had reduced the train’s brake effectiveness to less than 40% of maximum, down from above 60% when it was placed in emergency three hours earlier.

CP crews regularly filed safety hazard reports regarding poor brake performance on Field Hill in January and February each year. “Although CP’s procedure for safety hazard reporting was actively followed at the Calgary terminal, the trend analysis it required was not being done,” the TSB report says. “Consequently, year after year, the reports on the poor braking of unit grain trains on Field Hill were closed, no formal risk assessment was conducted, and insufficient corrective action was taken.”

Dockrell, an experienced engineer making his 1,268th trip on the Laggan Sub, wrote a safety hazard report about braking problems he experienced with a unit grain train on Field Hill the day before the tragic wreck. “In fact, while descending the grade, the [engineer[ had been so close to a complete loss of control that he asked the [rail traffic controller] to clear the track ahead, including the tracks in Field,” the TSB report says.

His handwritten report, found in the locomotive cab, was never submitted electronically due to a power failure in the CP bunkhouse at Field.

The families of two of the crewmen filed a lawsuit against CP last year and the Royal Canadian Mounted Police have launched a criminal investigation of the wreck.

In a lengthy statement, CP defended the qualifications and experience of the train’s inbound and relief crews, as well as the trainmaster they consulted. The decisions they made to “release and catch” the train followed Field Hill operating procedure, which was developed in consultation with running trades employees, Transport Canada, and CP management two decades ago, the railway said.

The TSB “erroneously concluded” that the runaway train experienced poor braking performance. “As confirmed in the Report, the train involved in the incident was fully functional, met all industry standards and passed all regulatory brake test inspections,” the railway said.

CP said its safety management system operates in accordance with regulations. “CP’s safety hazard reporting procedure was effective, both in form and in execution,” its statement said. “There were no systemic hazards that were not appropriately addressed, including Field Hill train braking performance, by CP’s Safety Management System.”

CP also said its training and certification programs are robust and meet or exceed regulatory standards.