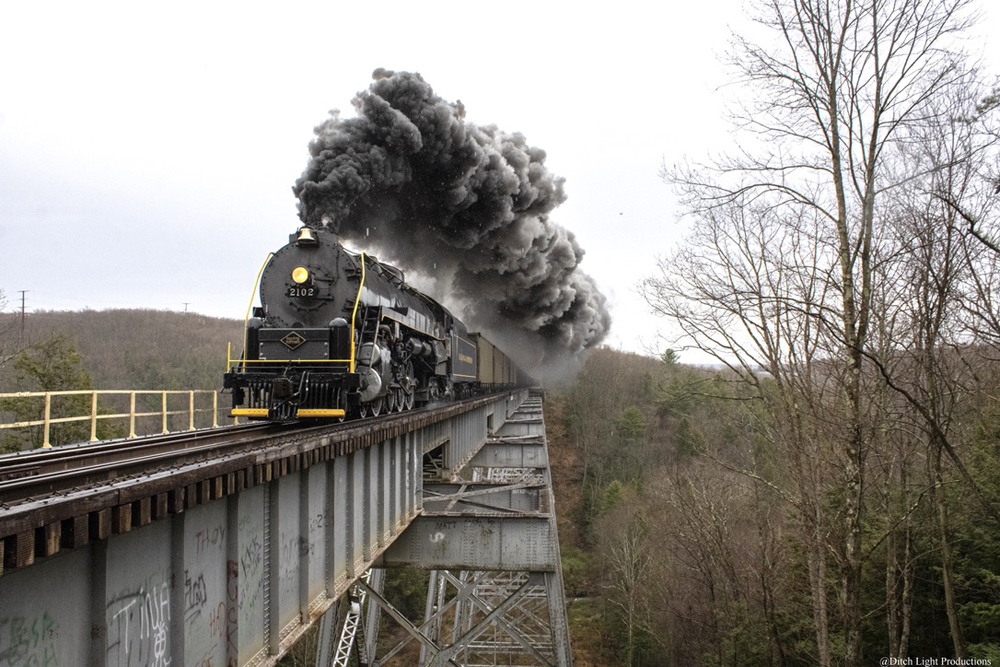 NORTH READING, Pa. — It is appropriate that the Reading & Northern, which calls itself The Road of Anthracite, would road-test its recently rebuilt 4-8-4 by putting it on the head end of a 50-car train of coal hoppers.

R&N’s 77-year old former Reading Class T-1 No. 2102 departed the railroad’s North Reading yard at 9:00 a.m. on Tuesday, April 26, making an all-day 85-mile trip to Jim Thorpe, and return to Tamaqua, Pa.   In an email April 27, railroad owner and CEO Andrew M. Muller, Jr. told Trains News Wire that the test run was perfect.  “The engine is ready for anything,” he said.

Following a six-year, $1.7 million restoration, No. 2102 will debut in revenue service on a sold-out May 28 North Reading-Jim Thorpe passenger excursion. Railroad officials said the 50 empty hoppers approximated the weight of the excursion train’s loaded passenger cars, and they wanted to test the big 4-8-4 over the planned route.  The railroad announced the move on social media, attracting rail enthusiasts from throughout the East — as well as local residents eager to see the steam engine and its long freight train.

Overcast skies and drizzle in the afternoon disappointed photographers, but the slippery rails tested No. 2102’s tractive effort and the skills of the several Reading & Northern engineers who work the railroad’s steam trains. Several short service stops throughout the day allowed inspection of various mechanical components as well as replenishing of the big engine’s water supply.

Upon arrival at Nesquehoning Junction, just outside Jim Thorpe, the train used the wye made possible by a new bridge built by the railroad in 2019, and backed into Jim Thorpe.   The return trip moved at a more spirited pace, although wet rails and the line’s steep grades provided fans with an experience that is rarely seen and heard in the United States today.

— Updated at 8:25 a.m. April 27 with additional details, comments from railroad owner Andrew Muller; updated at 8:55 a.m. to correct date of first excursion to May 28.