Why 'no-fitters' make no sense 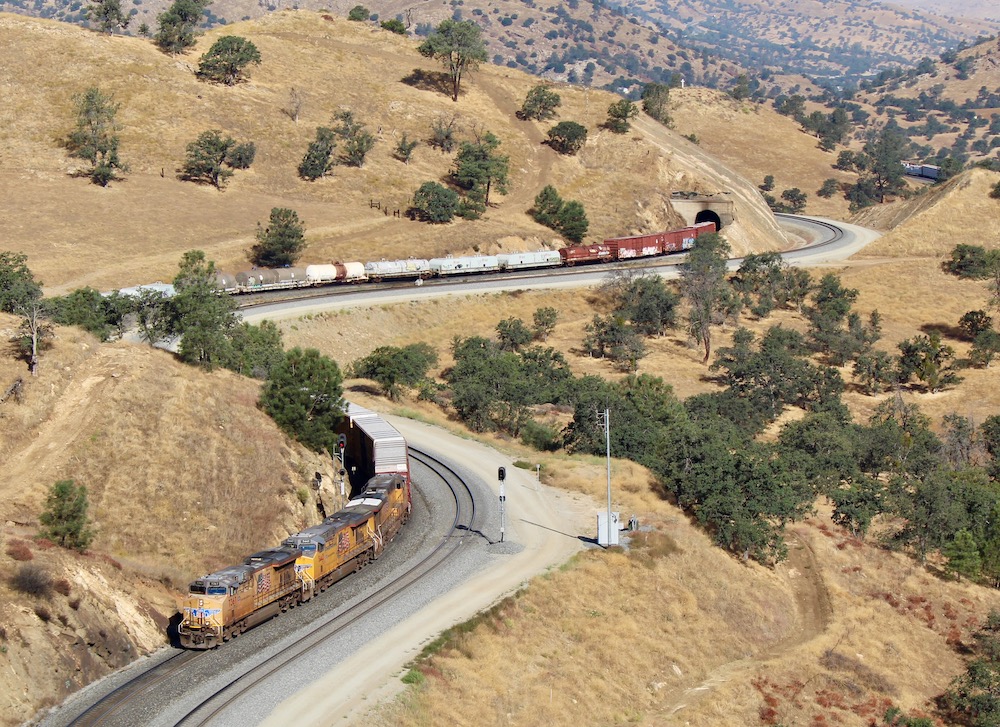 Railroads are attracted to extremely long trains like a moth to a flame. And sometimes they get burned from this unhealthy obsession.

A case in point: In October CSX Transportation ran two overlength merchandise trains at each other on its single-track mainline between Savannah and Augusta, Ga. The plan was to do a double saw-by — a maneuver as complicated and time-consuming as you can imagine — to get the no-fitters past each other. But that plan went out the window when the 12,000-footer tripped a hot box detector. While the conductor hit the ground to find the problem, the crew of the 11,000-footer was instructed to leave half of its train in a siding, then proceed to the next siding to await the 12,000-footer. Once it passed, the 11,000-footer had to retrace its steps and put its train back together before heading back in the right direction.

The idea behind long trains is as simple as it is old. Move your tonnage on fewer but longer trains and you save crew, locomotive, and fuel costs.

The savings can be illusory, though, if you take the concept to the extreme. In the CSX example, both manifest trains had to be recrewed. So did two locals caught up in the mess. Amtrak’s Silver Star was delayed 45 minutes. And, most importantly, the customers’ freight was delayed almost 5 hours.

It’s fair to ask: Is this any way to run a railroad?

Canadian Pacific CEO Keith Creel would say no. During hearings on the proposed CP-Kansas City Southern merger, Creel lamented the fact that Union Pacific’s long trains frequently block the main tracks around Englewood Yard in Houston, impeding KCS trains that run through the terminal via trackage rights on UP. Englewood’s receiving and departure tracks are a steam-era 7,000 feet, which is not uncommon. But since 2018 UP’s average train length has grown 30% to an industry-leading 9,483 feet, requiring longer trains to double or even triple their way in or out of Englewood.

Surface Transportation Board Chairman Martin J. Oberman asked the obvious: Should UP be running shorter trains or building longer tracks?

Creel said he understands UP’s desire to run longer trains. “But you can’t let your ambitions get ahead of your physical plant,” he says. “You have to match yard capacity with main line capacity, size of trains.”

When CP wanted to run 10,000-footers in and out of the Twin Cities, it first extended the receiving and departure tracks at its St. Paul, Minn., yard to 10,000 feet so trains wouldn’t tie up the main.

UP could do the same at Englewood’s west end, where Creel says there’s room after the railroad shifted its intermodal operations to nearby Settegast Yard. UP has plans to lengthen Englewood’s receiving and departure tracks, but they’re on hold due to concerns over soil contamination on the site. To UP’s credit, it has completed 80 siding projects to support the operation of 15,000-foot trains. Yet there are still places where it’s more than 60 miles between long sidings.

Railroads continue to push the limits of common sense with megatrains. On subdivisions where long sidings are few and far between, the no-fitter trains extend meet delays. Even double-track mains aren’t immune. Monster trains can bog down the double iron by taking longer to enter and exit permanent and temporary speed restrictions. Megatrains also encounter more frequent mechanical problems. The law of averages says that the more cars in a train, the more likely there’s a bad apple in the bunch.

Given all this collateral damage, why would some Class I railroads continue their love affair with trains that don’t fit their physical plants? It’s because they care more about the operating ratio and investors than they do about providing reliable service.

The service design veterans I spoke with agreed it’s bad railroading to run no-fitter trains in both directions in single-track territory. It’s also not a good idea to run lumbering behemoths that turn a fast double-track corridor into molasses. The toll on service simply isn’t worth it. And the supposed operational savings are all too often offset by unpredictability of recrewing trains en route.

This year, as part of its back-to-the-basics operations makeover, Canadian National stopped running trains over siding length. CEO Tracy Robinson says it’s among the interrelated reasons why CN’s on-time performance is up sharply, the railway is running faster than it has in six years, and unplanned recrews fell by 38% in the fall. Doesn’t that sound like a winning formula?

30 thoughts on “Railroads have a shortsighted attraction to extremely long trains: Analysis”