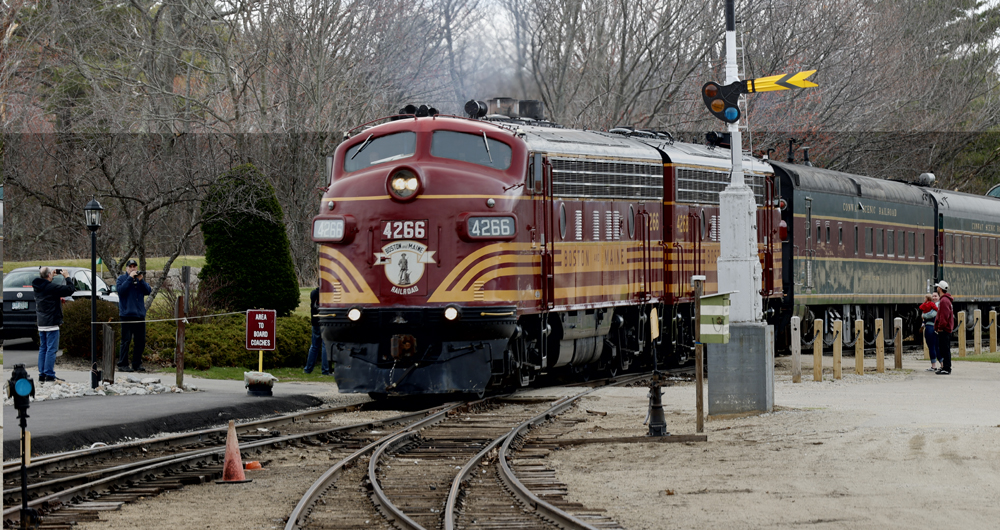 NORTH CONWAY, N.H. — The Conway Scenic Railroad will launch its popular Mountaineer excursion train to Crawford Notch earlier than usual in 2022, beginning with a special Railfan’s Mountaineer photography special on Sunday, May 22.

The train, to be hauled by a combination of locomotives including 470 Club’s former Boston & Maine F7A diesels, is scheduled to board at North Conway at 9 a.m. and will operate an extended timetable to facilitate several photo stops along the way.

This special will be the first time that the Mountaineer has operated with both of 470 Club’s F7As. Where B&M No. 4266, built in 1949, has long operated on Conway Scenic, mostly for railfan photo events and charters but also occasionally on regularly scheduled trains, No. 4268, built in 1950, was only recently restored to active service. The two locomotives made their debut on April 24, 2022, working back-to-back on the Conway and Sawyer River excursions. Both locomotives are painted in the classic General Motors-designed Boston & Maine maroon-and-gold scheme of the 1940s and 1950s.

Expanded autumn service will begin in September, with extra trains to accommodate the flood of leaf peepers. During the autumn, the Mountaineer operates beyond Crawford Station to Fabyan on the west side of Crawford Notch. Historically, Conway Scenic concluded excursions over Crawford after the brilliant foliage faded from the trees, but owing to high late-season demand in recent years, the railroad plans to continue scheduling Mountaineer excursions during the first three weeks of November.

The Mountaineer is very popular and the railroad advises passengers to buy tickets ahead of time. September and October runs tend to sell out weeks in advance. Tickets are available by calling 603-356-5251, or at the Conway Scenic Railroad website.