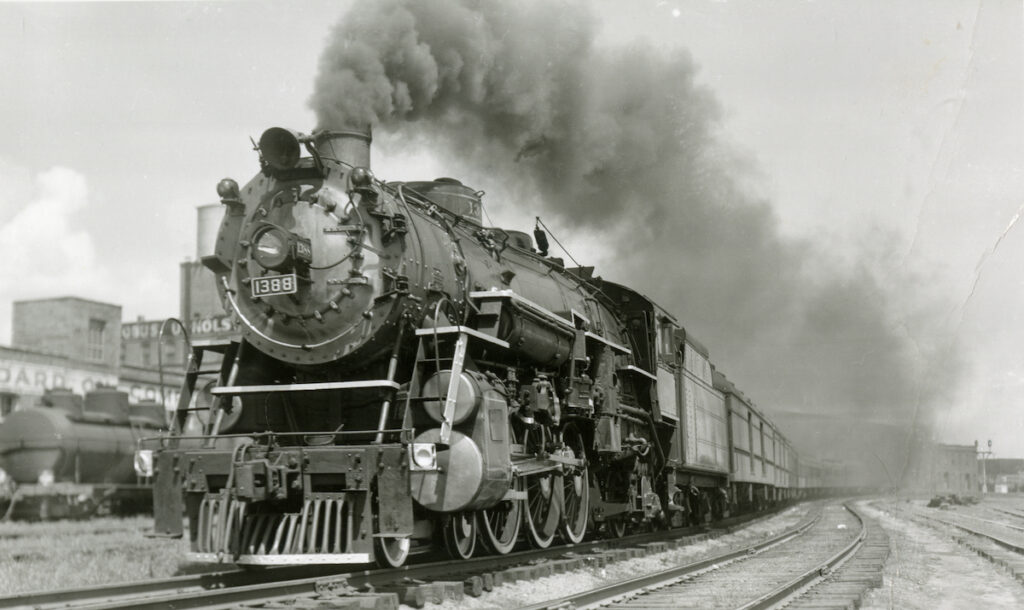 Last fall, NS donated the Southern Railway archives to the Atlanta History Center. And then this spring NS followed up by donating the N&W archives to the Virginia Museum of History & Culture in Richmond.

Significantly, NS didn’t just drop crates of dusty old documents, photos, and relics on the museums’ doorsteps. Through six-figure grants, the railroad also saw fit to ensure that the collections are professionally cataloged, digitized, and preserved in perpetuity.

The Atlanta History Center received $500,000, and the Virginia museum $750,000, to support the preservation of the collections that include hundreds of thousands of pages of correspondence, company records, blueprints, timetables, photos, advertisements, and more.

They are irreplaceable archives. Each tells the story of the railroads and their predecessor lines going back to the 1840s. And since railroads are woven into the fabric of the communities, states, and regions they serve, the collections also offer a glimpse into the economic and cultural past of both Southern and N&W territories.

The Southern collection includes menus from President Franklin D. Roosevelt’s train trips, telegrams announcing the sinking of the Titanic, more than 30 years of editions of the Southern’s Ties Magazine, plus advertisements, contracts, photos, and construction plans for stations and yards.

Eventually, Southern and N&W historians and afficianados will be able to access the collections online, then visit each museum to delve into the physical records. Meanwhile, archivists Georgia and Virginia remain busy sifting through the collections as part of a cataloging process that will take several years.

No one is happier about the archival windfall than Jackson McQuigg, the vice president of properties at the Atlanta History Center. On a January visit to the museum, McQuigg was eager to show off a smattering of items from the Southern collection: photos of ancient balloon-stack steam locomotives, images of railway workers along the line, pictures of small-town depots, and shelves lined with stacks of ornate 19th-century record books that include minutes of board of directors meetings.

The Atlanta History Center is concentrating first on cataloging and digitizing the collection’s 25,000 photographs of the railway, its places, and its people. Some of the images have caption information, including dates and locations. But others lack this essential information and the center’s staff will do a bit of detective work to piece together captions from various sources.

Claire Haley, the center’s vice president of public relations and programs, says she’s excited to be able to connect Southern Railway history to everything else the museum does. Railfan historians know that Atlanta developed alongside the railroads and ultimately became the crossroads of the South. The history center makes that point with exhibits that include the Zero Milepost around which Atlanta grew and the 1856 Western & Atlantic 4-4-0 Texas of Great Locomotive Chase fame. The addition of the Southern Railway archives will help the center bring the importance of railroads to a broader audience in Atlanta and the Southeast.

In Richmond, the N&W archives will dovetail with the Virginia Museum of History and Culture’s mission of connecting the past and present. “Railroads have played a critical role in the expansion of both passenger travel and commercial transportation in the United States,” says CEO Jamie Bosket. “With the addition of the Norfolk & Western collection, the VMHC now houses one of the most significant railroad archives in the U.S. We’re thrilled to preserve this iconic history and to make it publicly available to students and teachers, researchers, and railroad enthusiasts.”

The donations also allow NS to pay it forward. The grants enable the museums to hire interns from underrepresented communities over the next five years, whose work will support the collections each semester.

As NS looks ahead on its 40th anniversary, its archive donations will be gifts that keep on giving for generations to come.

2 thoughts on “On Norfolk Southern’s 40th anniversary, a salute to more history: Analysis”