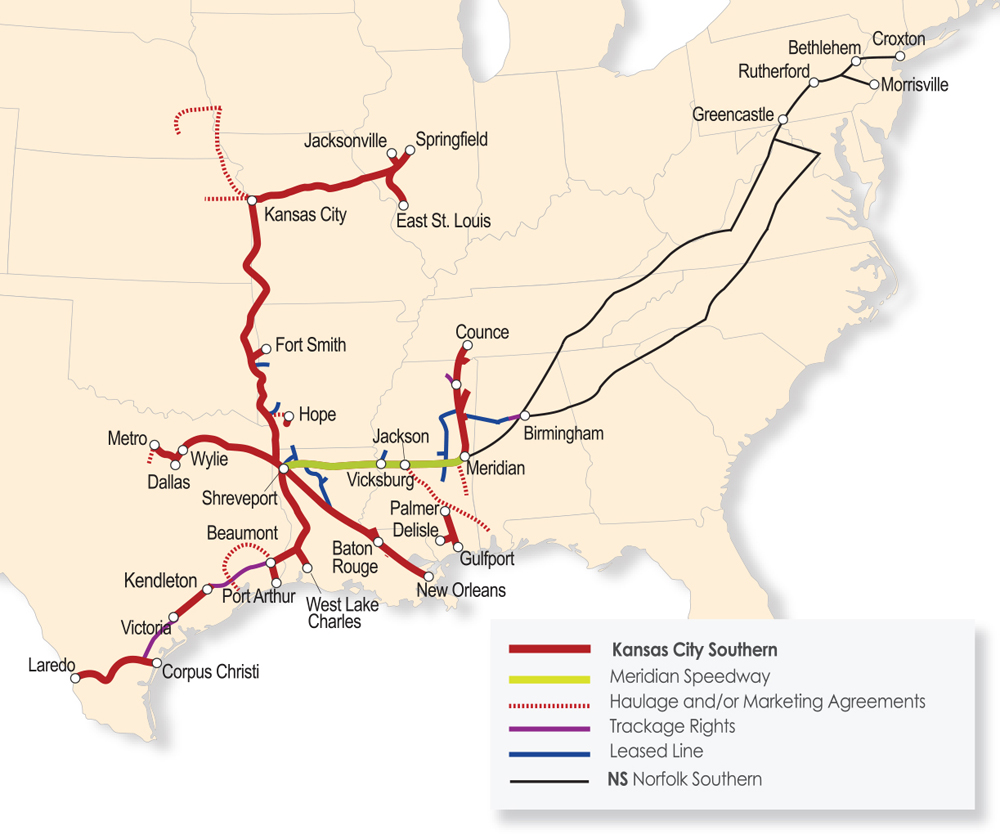 NS announced its intention to protect its Meridian Speedway traffic in a pair of Monday regulatory filings posted to the Surface Transportation Board website on Tuesday. NS may exercise its option to purchase the KCS-served intermodal terminal outside Dallas, something it’s allowed to do as part of the railroads’ Meridian Speedway joint venture. (Those filings are available here and here.)

CSX Transportation, meanwhile, said in a regulatory filing that it is seeking to blow up a key part of the Meridian Speedway deal: NS’s exclusive right to interchange intermodal traffic with KCS at Meridian, Miss.

But Canadian Pacific Kansas City intends to launch new intermodal service between Dallas and Chicago and the Twin Cities, with connections to CP terminals across Canada and Detroit.

NS has a 30% stake in the Meridian Speedway, the joint venture covering KCS’s 320-mile main line from Meridian to Shreveport, La. As part of the partnership that dates to 2006, NS contributed $308 million for track and capacity improvements to the line, which links with KCS’s own main from Shreveport to Wylie.

“The Meridian-Wylie Route represents a significant component of NS’s commercial and operational offerings to intermodal customers,” the railroad said in its filing. “Preserving NS’s ability to meet its intermodal customers’ needs with competitive rates and services over that line is a primary focus for NS.”

“​​Applicants’ stated plan is to increase traffic significantly over certain segments of the Meridian-Wylie Route without investing in needed capacity, while at the same time stifling traffic growth elsewhere on the route,” NS wrote. “This change in the status quo — overloading some portions while choking growth on others — may result in less reliable service and, as a result, reduce competition for rail and drive more intermodal shipments to the highway.”

CPKC’s growth plans threaten to squeeze out NS customers, NS argues. NS traffic to and from Wylie increased 28% between 2019 and 2021 and represented 47% of all Meridian Speedway intermodal traffic. NS would be able to acquire the terminal in May 2024 under a clause in the joint venture agreement that allows NS to purchase Wylie if KCS is acquired by another company.

NS has asked the STB to condition approval of the CPKC merger on the granting of trackage rights on KCS between Shreveport and Wylie. The trackage rights only would be effective in the event of a major service failure on the part of CPKC and NS’s purchase of the Wylie terminal. This would be an extension of an identical trackage rights provision NS has with KCS that covers the Meridian Speedway. Currently KCS handles the NS trains under haulage rights from Meridian to Wylie.

NS also asked the board to impose conditions that would require CPKC to keep gateways open on commercially reasonable terms and to establish a five-year oversight period to monitor compliance with merger-related agreements.

CSX contends that the Meridian Speedway joint venture restricts rail competition, which raises antitrust concerns. “NSR’s acquisition of exclusive control of overhead intermodal traffic on the Meridian Speedway appears to have resulted in significant foreclosure of competition for service to and from the east end of the Speedway,” CSX said in its filing.

As a result, other railroads wishing to move traffic between the Southeast and Southwest must use longer routes through less-efficient gateways, including Memphis and New Orleans, CSX says.

CSX has asked the STB to impose conditions on the CPKC merger that include lifting restrictions on what types of traffic can move over the Meridian Speedway.

CSX also wants the STB to bar NS from extending its Speedway rights and require CPKC to establish an interchange with CSX at Meridian. CSX does not directly reach Meridian, but has a haulage rights agreement with Genesee & Wyoming short line Meridian & Bigbee, which connects with CSX at Montgomery, Ala.

CSX also asked the board to ensure that CPKC maintains efficient and open gateways at New Orleans and East St. Louis, Ill., and protects shippers who route traffic to and from Mexico via the Laredo, Texas, gateway that’s controlled by KCS and KCS de Mexico.