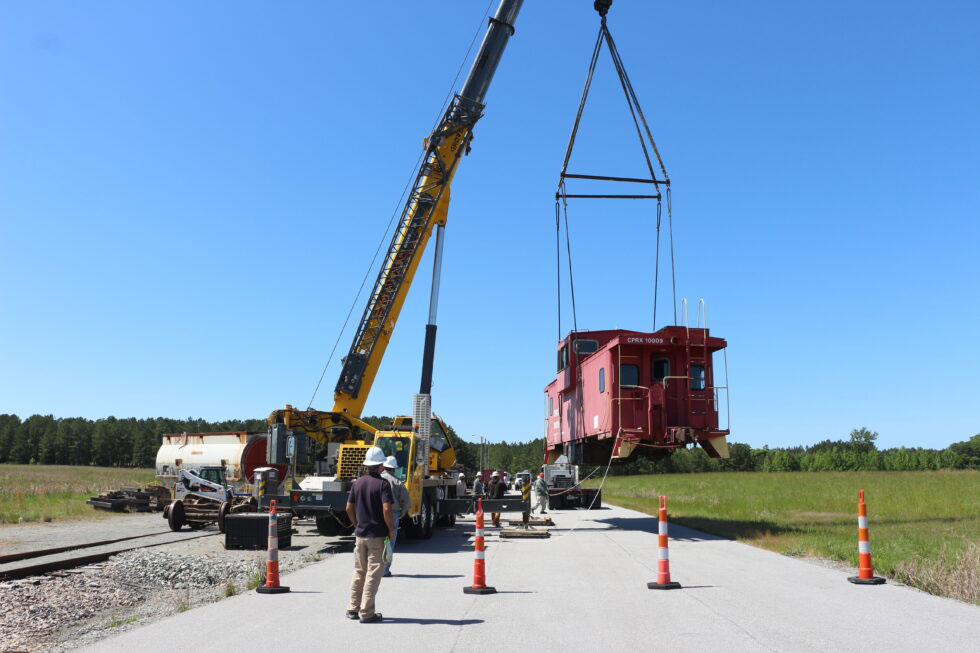 BONSAL, N.C. – The North Carolina Railway Museum is orchestrating the 5-mile highway movement of 10 landlocked railroad cars — both passenger and freight — from a nuclear power plant site to its headquarters here.

The cars were the subject of NCRM’s “Save the Ten” campaign, which successfully raised nearly $200,000, $50,000 of which came from a grant from the state legislature. Additional grants came from CSX Transportation and the National Railway Historical Society.

It is costing more than $10,000 per car for rigging and flat-bed truck movement from Duke Energy’s Shearon Harris property to the museum’s operating subsidiary, the 4-mile-long New Hope Valley Railway. The amount raised over $100,000 will be used to begin restoration.

NCRM’s campaign began in the 1990s, when it acquired four cars that were on the nuclear plant property. Tightened security after the Sept. 11, 2001, terrorist attacks, fundraising issues, and the COVID-19 pandemic all delayed the project. The pandemic also steeply cut public ridership on the museum’s railroad, depriving it of its main source of revenue.

In the meantime, the utility announced that it had six more cars that it was planning to scrap — all of them operational — but was willing to donate to the museum. In 2019, CSX severed the connection to Duke Energy’s siding, but undeterred, NCRM officials continued to pursue the campaign until reaching the goal for all 10 cars. That set the stage for the museum to schedule a week-long move.

On May 9, cranes, heavy-haul trucks, and rubber-tire dollies were gathered to begin the move over Old U.S. 1. Bonsal is located about 25 miles southwest of Raleigh on a former Seaboard Air Line main line, now CSX, which still sees passage of Amtrak’s New York-Miami Silver Star.

In a press release, the museum noted that ”many of the cars are weathered and more than 100 years old. Some are the last surviving relics of their kind, but all in solid condition and salvageable.”

Victor Varney, an NCRM volunteer and project manager for the “Save the Ten” campaign, said, “The roadblocks and logistics involved in transporting the railcars have been challenging but the move is finally happening. Saving these railcars and having them as part of our rolling stock will help us preserve and share North Carolina railroad history, which is our mission.”

4 thoughts on “NC museum transports 10 cars to its property”