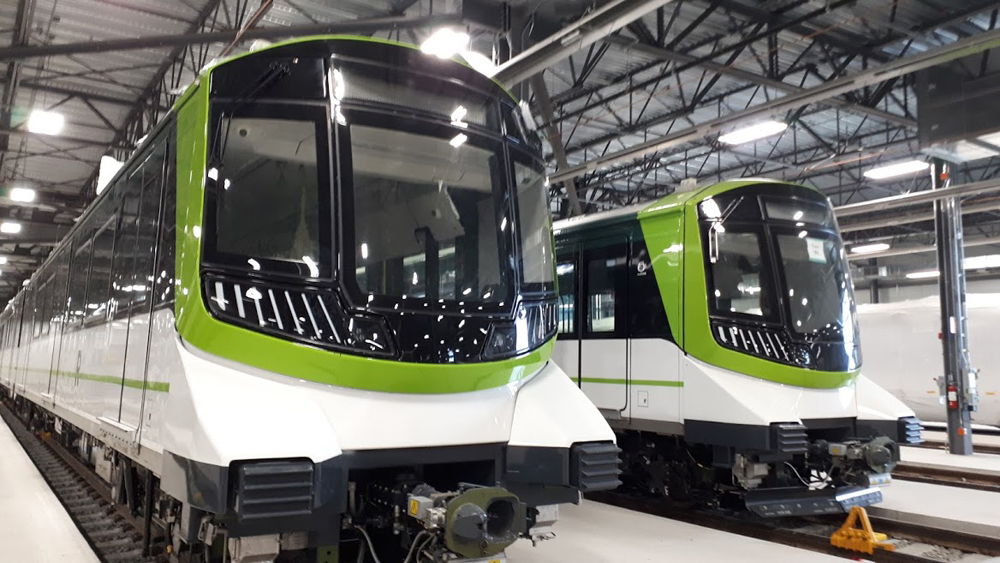 The four-line, 67-kilometer (41.6-mile), 26-station network will connect the island city’s burgeoning south shore suburbs along the reconstructed Champlain Bridge to Montreal’s mainline VIA Rail Central Station hub. From there it will advance north through the 5-kilometer (3.1 mile) Mount Royal Tunnel to northern and western suburbs, including a link to Pierre Elliott Trudeau International Airport.

The project is financed and managed by the Caisse de dépôt et placement du Québec (CDPQ), a massive public investment fund, with the Quebec and Canadian governments also underwriting the cost. Construction began in 2018 with full completion expected in 2024.

The system plans driverless operation. Engineering and construction are being carried out by international consortium, Groupe NouvLR, while rolling stock, operations and signaling with a 30-year maintenance contract was awarded to France’s Alstom SA. The first two-car train sets arrived last fall from Alston’s SriCity factory in Andhra Pradesh, India. By July, two dozen sets had arrived, some still shrink-wrapped as viewed on an exclusive tour for Trains News Wire. The system will have 106 trainsets, or 212 cars in total.

The REM’s Saint-Laurent equipment is based on Alstom’s Metropolis platform, in use in cities such as Sydney, Budapest, and Shanghai. Driverless operation uses Alstom’s Urbalist 400 radio communication-based train control (CBTC).  The system is controlled by hundreds of yellow trackside beacons and axle counters which maintain speed and headways. “That’s one of the most efficient systems of automation,” Alstom spokesman Adrien Vernhes told Trains.

The first 3.5-kilometer section on the south shore is now complete, including overhead catenary, where REM is carrying out daily tests. “This is something very special here in Montreal,” Vernhes said. Usually, he said, individual systems are tested but not the entire finished system at once.

The REM will complement the city’s underground Metro by providing rapid transit to previously underserved south shore and west island suburbs. But the longest line, the 30-kilometer Deux-Montagnes, ending on the city’s off-island north shore, will replace conventional trains operated by the region’s Exo commuter rail authority. The line through the Mount Royal tunnel dates to 1918, but the rebuilding of the tunnel to REM standards brought an end to more than 100 years of commuter rail service [see “News Photos: Last runs for Montreal’s Deux-Montagnes commuter line,” Trains News Wire, Dec. 31, 2020].

The REM will offer 20 hours of daily service, with 5-minute off-peak and 2.5-minute peak time headways on main sections. The system can be adjusted to provide headways as frequent as 90 seconds. On less busy segments the intervals will be five to 15 minutes.

The system’s color scheme departs from the traditional blue of city’s Metro and bus system,  with a darker green and florescent yellow, in part to make it more visible for people with disabilities and to reflect the 1.5 kV A.C. electric system’s lesser environmental impact. It will feature the largest wraparound front and back windows of any light rail system, designed to allow passengers, especially children, to catch city views.