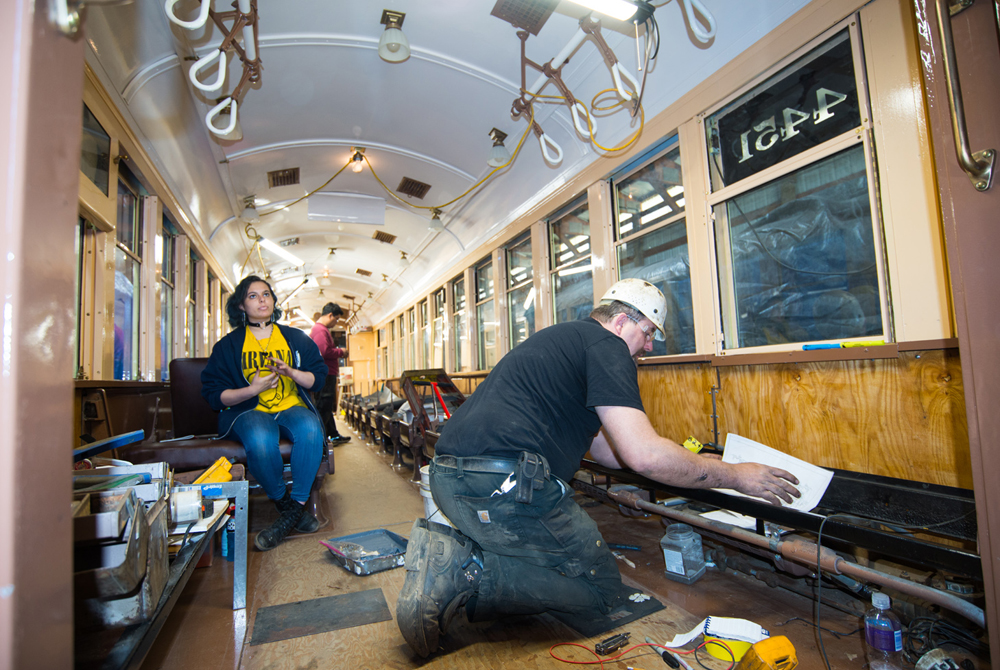 “Basically, everything you see here has been redone, due to the rust and the rot,” says Bennett, a member of the museum’s board of directors and chief car officer. When Trains visited on May 1, Bennett was working on the car’s automatic doors, just another piece of the museum’s most “massive” restoration effort to date.

“A multi-door control was installed by the rapid transit midlife, and it is acting up today,” he says. “Imagine that — a 75-year-old system in a 96-year-old train is having some issues.”

As a crew works on finding the door-system short, volunteer George Barreto of Brooklyn, N.Y., steps off a ladder into car 4451 and works with his 14-year-old daughter Chelci.

“This is the best-looking L car any of us will ever set foot on,’’ says Barreto, a Long Island Rail Road engineer. He and his daughter have flown out to work on the restoration with the museum’s other volunteers.

“It makes me happy ’cause this is something I’ve wanted to do since I was 5 or 6 years old,” Chelci says.

The Barretos have flown out to work on the car restoration with other museum.

The smell of fresh paint wafts through the open north doors of the carbarn. Along with chasing the electrical short, volunteers are installing new brass door lock sets and preparing to reinstall seating and class lights.

“The class lights in the front of the train would tell the towerman where the train was headed, and which switch was needed to be thrown. The classification boxes were added to the cars after delivery,” he says. “The entire units had to be rebuilt. The only thing that we were able to use were the glass lenses.”

Lou Gerard, who worked for CTA from 1971 to 2010, is quite familiar with the car and worked on it in regular serv ice.

Gerard says 205 of the cars, numbered 4251-4455, were built by the Cincinnati Car Co. between 1922 and 1924. They were delivered to the Chicago Elevated Railroads, which became Chicago Rapid Transit, and then the Chicago Transit Authority in 1947. The 4451 was in the last batch built in 1924 and the last 4000 to be regularly inspected by Wilson Shop on Nov. 6, 1973, two days before the cars were retired from service. The ‘’Plushie’’ nickname was attributed to a shopman, since the original car seats featured plush upholstery which was later replaced with Naugahyde.

“I motored it out of the shop from its last inspection,” Gerard says. “They were great cars and were in service for over 50 years.”
He says he still works on the CTA Heritage pair of cars, Nos. 4271 and 4272.

The Fox River Trolley Museum is located on the west side of the Fox River at 365 South La Fox St., Illinois Route 31, in South Elgin. The museum opens its season Sunday, May 9.