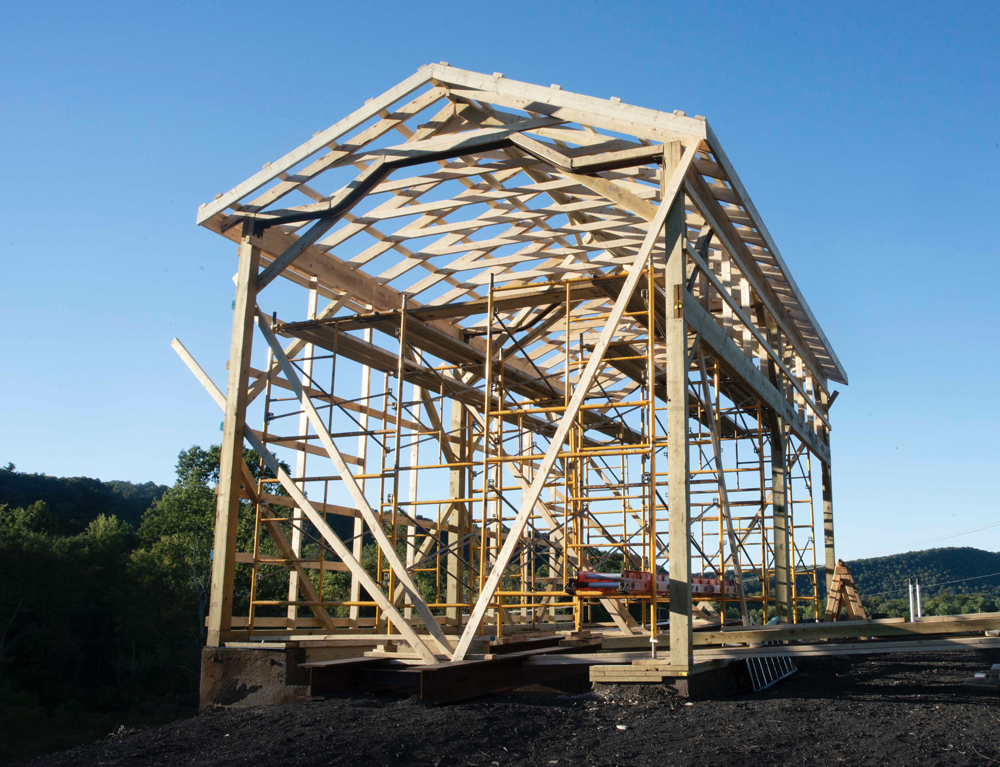 ROCKHILL FURNACE, Pa. – Friends of the East Broad Top volunteers wrapped up a week’s worth of labor on Friday, Sept. 23, the group’s second week of concentrated effort this year.

The crew ranged between 10 and 20 people, working in close coordination with the railroad’s own full-time employees, according to Andy Van Scyoc, Friends president. The group usually holds one or more work weekends per month and one or two work weeks per year.

The Friends contribute cash from an annual fundraising drive, and provide thousands of hours per year of volunteer labor, working mostly on buildings (both interior and exterior), track, rolling stock, and archives. Last year’s campaign goal was an unprecedented $100,000, which members more than doubled with donations, raising more than $242,829 as of the end of August. A new round of fundraising will begin with the Friends Fall Reunion on Oct. 7-9.

The railroad, a National Historic Landmark, is owned by the non-profit EBT Foundation, Inc., formed in 2020 to buy and restore the narrow-gauge carrier that has lived two previous lives – as a common-carrier coal, ore, and lumber hauler from 1872 to 1956, and as a steam tourist railroad from 1960 to 2011.

Two of the most visible Friends projects showing progress last week were the construction of a framework to recreate a shed above a coal tipple at the south end of Rockhill Furnace yard, and the restoration of track in multiple locations that have not seen trains since the EBT’s 1956 closure.

The tipple once supplied engines with Broad Top semi-bituminous coal that had been mined along the railroad, then dumped from EBT hoppers shoved up a ramp track leading off the main line. A covered shed protected the area where the hoppers were spotted at the end-of-track unloading pit. After the railroad closed in 1956, that siding fell into disuse and wasn’t reactivated when the railroad began tourist service in 1960.

The tipple continued to function as before, but was fed by trucks. At some point, the shed fell into advanced disrepair and disappeared.

A grant from the Friends purchased the lumber for the shed’s reconstruction — studs, joists, and beams — to set up the framing. Siding and roofing, much of it typically sheet-metal material in common-carrier days, has been ordered and is expected to be installed to complete the work soon, Van Scyoc said

A Friends track crew, often joined by full-time Foundation staff, has been at work on various projects along the railroad, mostly on the operating sections —the yard and 4½-mile-long main line north to the Colgate Grove wye and former picnic stop. Led by volunteer Gene Tucker, the crew has begun restoring the southward main line, unused since 1956, as a first step toward reopening track about 8 miles to Pogue, Three Springs, and Saltillo. The Friends have already raised and committed funds for preliminary engineering work to rebuild two long-demolished structures at Saltillo — a combined freight and passenger station and an enclosed water tank.

The most evident work is the insertion of fresh ties on a basis of replacing every third tie. When completed, that will provide enough stability to allow the use of handcars, motorized speeders, and light work trains. This is being done at the south end of Rockhill Yard and at the Route 475 grade crossing, about a mile south of Rockhill. This stretch has been used for speeder rides at selected events.

At Robertsdale, 19 track-miles south of Rockhill Furnace, the Friends maintain the former EBT station, as well as a museum in an adjacent two-story former railroad office building. On selected weekends, the Friends staff the museum and offer handcar rides on a short section of restored main line.

Over the last few months, culminating with a concentrated effort last week, the usable portion of track, formerly 800 feet, was lengthened to 1¼ miles. This involves digging out and exposing buried rail, inserting J-hooks and metal ties to hold the track to proper gauge, and, in one spot, building a temporary timber bridge to span a washout. Very few crossties remain from common-carrier days, as EBT didn’t use creosoted ties, so nature has reclaimed all but a few ties. Those that remain are almost completely rotted.

This stretch of track will be open for handcar rides for FEBT members during the Fall Reunion.

Friend volunteers also continued improving and stabilizing structures in the shop complex, inside and out. “During the week, a number of Rockhill Furnace buildings received signature red paint, including the sand house, storehouse, car shop, machine shop, and lumber shed,” said Van Scyoc. “White trim paint was applied to several windows of the carpenter shop and the Roundhouse.”

One of EBT’s four pieces of 19th-century wooden passenger rolling stock is combine No. 14, bought secondhand in 1916 from a Massachusetts narrow gauge line, the Boston, Revere Beach & Lynn Railroad. The Friends have been restoring it for about a decade, but progress has accelerated since 2020. Van Scyoc said siding material has been painted green, one baggage door is completed and second has been prepped for paint. “Seats for the coach compartment were also painted,” he said.

New coaches in service: Newly built Hamilton Manufacturing Inc. coaches Nos. 21 and 22 have been finished with orange “East Broad Top” lettering and placed into revenue service. They are providing welcome and much-needed covered indoor seating just in time for the arrival of cool weather, according to EBT General Manager Brad Esposito. EBT has been relying on a handful of open cars, converted from boxcars and flatcars, for its public excursion trains, with a caboose being the only enclosed public accommodation. When the weather gets truly nippy, heaters in the new cars will be switched on.

EBT has two more cars on order with Hamilton — a third coach, and a combine that will be fully wheelchair-accessible.

Baldwin No. 16 update: EBT Master Mechanic Dave Domitrovitch reports that the stainless-steel boiler jacketing for 2-8-2 locomotive No. 16 is “90%” done and will soon be primed for painting. Mechanical work continues on the rods and the valve-gear timing, he says, also noting that the cab is painted and lettered, but not yet mounted on the engine. The tender is painted gloss black with traditional EBT orange lettering.