The investigation will take months to complete, but a preliminary report will be published in about 30 days 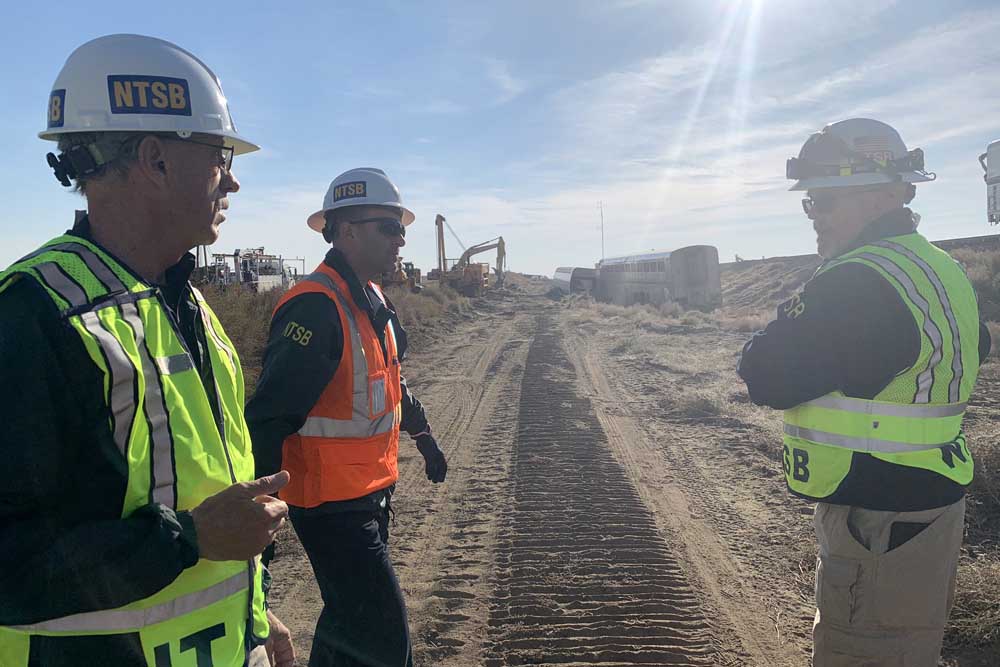 JOPLIN, Mont. — The vice chair of the National Transportation Safety Board says Amtrak’s Empire Builder was traveling below its posted speed limit when it derailed and partially overturned over the weekend in rural Montana, killing three people.

NTSB Vice Chairman Bruce Landsberg told members of the media Monday afternoon that the eastbound Empire Builder was traveling at between 75 and 78 mph when it derailed along BNSF Railway’s Hi Line Subdivision on Saturday. Landsberg says the posted speed limit for passenger trains on the line is 79 mph and that the track is inspected regularly by its owner, BNSF Railway. “The derailment occurred on a gradual right-hand curve, and it occurred prior to reaching the switch that is there for a siding,” Landsberg told reporters. “There was a track inspection conducted on the 23rd by BNSF and they advised us they are conducting approximately two track inspections every week on this section of track.” Landsberg says the maintenance of the rail line will be a focus of investigators in the derailment probe.

“Maintenance is going to be a very big concern for us,” Landsberg says. “We don’t know at this point exactly what happened, whether it was a track issue or whether it was a mechanical issue with the train, so all these things are open.”

Monday’s media briefing offers the latest update on the derailment investigation since NTSB officials arrived at the scene on Sunday. Landsberg says the investigation into the derailment, which claimed the lives of three people and resulted in injuries to approximately 50 more people, will likely take months to complete, but a preliminary report will be published in about 30 days. He says the investigation will be a sweeping probe and will include interviews with crew members of the Empire Builder, as well as other trains which traveled the same rail line on Saturday, and also maintenance workers and others.

Landsberg says a BNSF freight train passed through the area about 80 minutes prior to the Empire Builder’s derailment, which occurred at approximately 3:55 p.m. Saturday. He says federal investigators are conducting frame-by-frame reviews of forward-facing camera footage from that freight train’s locomotive, as well as from the lead locomotive, Amtrak No. 74, which was allowed to be moved from the derailment scene along with its trailing locomotive and some cars on Monday.

“We are not ruling anything out at this point. We have ruled everything in,” Landsberg says. “This is our first day on the ground and the team for the on-scene portion will be here for probably the better part of the week, so there is a lot of work to be done yet.”

While offering few details on the circumstances of the crash, one grim factor the NTSB is investigating, Landsbergs says, is the possibility that passengers may have been ejected from the train during the wreck. In response to a question from a reporter, Landsberg said there is no evidence of such an occurrence at this time, but it is possible. “This is something that the NTSB has looked at in prior crashes, so it’s definitely going to be a point of interest,” Landsberg says.

Saturday’s crash occurred near the unincorporated community of Joplin in north-central Montana, just about 30 miles south of the Canadian border. The train consisted of two locomotives and 10 cars, eight of which derailed with four of the cars overturning. The overturned cars, which include a Sightseer Lounge, two coaches and a sleeper, were on the rear of the train and are part of Empire Builder’s Portland section. The Associated Press is reporting that emergency responders attempted unsuccessfully to cut through the roof of at least one of the overturned cars to evacuate passengers from the wreck who were unable to walk. The evacuation of passengers lasted for about three hours after the derailment.

Another NTSB investigator at Monday’s briefing said the derailment scene is scattered for several hundred yards. Landsberg added that, “The train was moving at 75 to 78 mph and they don’t stop on a dime, even when they come off the tracks, so it’s pretty well spread out.” Landsberg also says that the preliminary report on the derailment will shed light on “what” happened in the derailment, but it will likely take longer into the investigation to determine “why” the derailment occurred.

Landsberg did not indicate when officials would hold another media briefing.

31 thoughts on “Feds: ‘Empire Builder’ was traveling under speed limit at time of crash”