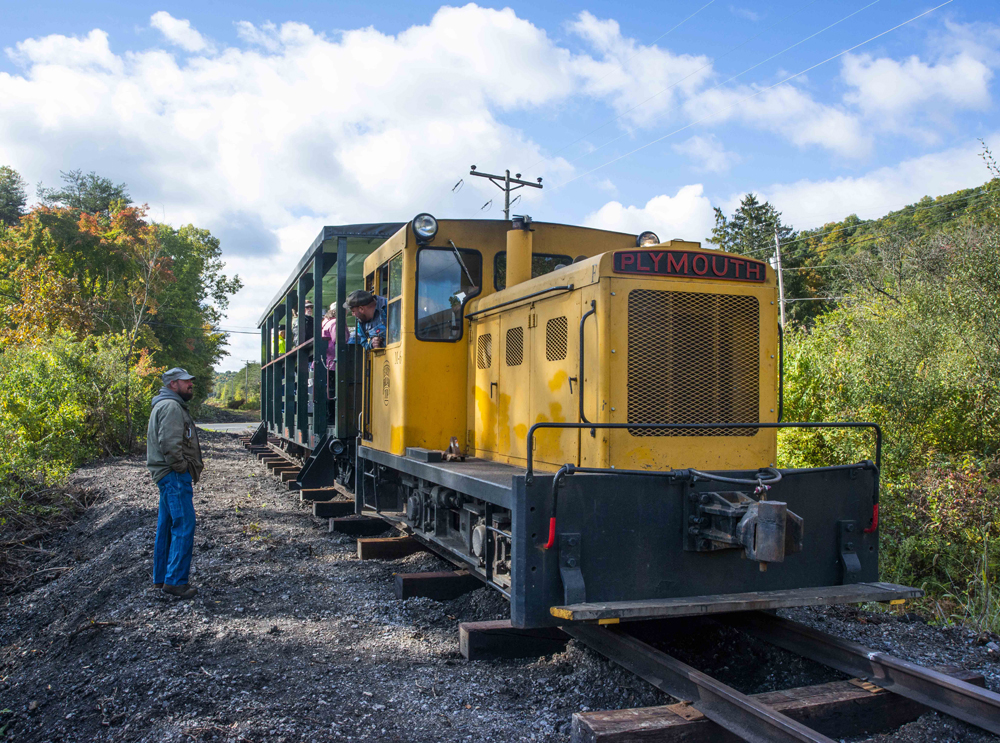 ROCKHILL FURNACE, Pa.—The East Broad Top Railroad notched another first during the Oct. 7-9 annual gathering of its friends auxiliary group, carrying passengers on a mile of narrow gauge main line that’s been out of service for 66 years.

As part of the Fall Reunion of the 1,777-member nonprofit Friends of the East Broad Top, EBT ran a shuttle train consisting of an open car powered by Plymouth diesel-hydraulic switcher M-6 through Rockhill Yard to the State Route 475 grade crossing. This section of track is south of the 4½-mile segment used since the beginning of tourist operations in 1960.

Restoring the EBT main line to the grade crossing is the first step toward reopening the southern two-thirds of the original 33-mile, 3-foot-gauge coal-hauling short line. The full route last operated in 1956; the non-profit EBT Foundation bought 27 miles of the line, a National Historic Landmark, in 2020.

The Friends volunteer track crew worked with the foundation’s three-member full-time track gang, inserting fresh crossties on the basis of every third tie. This stabilizes the track enough to run work trains, speeders, and handcars. Later, the missing ties will be inserted to shore up the rail to support steam locomotives.

The goal, EBT General Manager Brad Esposito said over the weekend, is to continue working south toward a passing siding at the village of Pogue, 2 miles farther, to open for light equipment by this time next year.

Another Friends project that moved closer to completion in the last few weeks is a sheet-metal shed over the coal tipple at the south end of Rockhill Yard. This structure provided cover for hopper cars dumping coal into the tipple pockets, destined for chutes to refuel the tenders of steam engines.

“The coal dock is the first time we’ve put something back that hasn’t existed for 30 years,” said Esposito. By way of comparison, the now-restored historic machine-shop complex was once in a ramshackle condition, but the buildings never fell down or collapsed. With the foundation’s blessing, the Friends are laying plans to rebuild the long-demolished station and enclosed water tank at Saltillo, 8 miles south of Rockhill. This is another symbol of EBT’s commitment to restore the remainder of its mountainous line to the coal mines that furnished its traffic.

Foundation Chairman Henry Posner told the assembled group that the financial support and volunteer labor were both greatly appreciated and vital to the railroad’s success.

“You kept the place from falling down, or burning down,” he said. “I  thank the Friends for [ensuring] the survival of the East Broad Top until the Foundation could take over. Without the Friends, we wouldn’t be having this conversation.”

During the eight years of dormancy from the end of tourist-era operation in 2011 to 2020, the Friends continued repairing and painting buildings and rolling stock even when the future of the property was uncertain.

Friends President Andy Van Scyoc echoed Posner’s observation, saying, “It’s one of the best partnerships we could possibly have.” He displayed a plaque representing that teamwork as recognized by the Heritage Rail Alliance, which recently jointly awarded the Friends and Foundation its first Jim Wrinn Award, named for the late Trains editor who championed railroad preservation and specifically the revival of EBT.

The Friends have funded the following work, either completed, under way, or planned: track work at Rockhill, Three Springs, and Robertsdale; restoration and truck work on combine No. 14; the coaling dock work; initial installation of a fire-suppression system; conservation  and documentation of the company archives; heating and air conditioning work at the Friends’ museum at Robertsdale; new roofs at the EBT station and museum in Robertsdale; and stabilization of the 268-foot-long Pogue trestle over Aughwick Creek.

Friends member Dave Bulman outlined efforts to enhance the volunteer experience by providing perks and recognition, and said the Friends and the railroad are jointly looking at ways to recruit youth and young adults, in order to “change the demographics.” Previous restrictions limited volunteer work to people who are 18 years and older. Among the models being examined are the National Railway Historical Society’s Railcamp and the youth program at the 2-foot gauge Wiscasset, Waterville & Farmington Railroad in Maine.

EBT historian and author Lee Rainey announced that a new EBT Archives and Special Collections website is now live, providing online access to 1,000 documents, “with thousands more to come.” EBT archivist Julie Rockwell has worked with Rainey; Scarlett Wirt; Juniata College history graduate Sammy Bellin; and Juniata College intern Brian Standfest to unpack, sort, record, scan, and post these items. They are part of a group of some 5,000 cubic feet of photos, blueprints, maps, train orders, clearance cards, minute books, car records, and other items dating to the beginning of the railroad in the 1870s.

The collection represents a hybrid of items held by EBT proper and those donated to or collected by the Friends, which have underwritten, and continue to fund, archives research.

An example of the usefulness of the site surfaced just hours after the site went up on Saturday. Foundation board members Lawrence Biemiller and Linn Moedinger were looking at a photo from the site showing the railroad’s iconic Timber Transfer at the dual-gauge yard in Mount Union. It was a tall gantry crane that lifted standard-gauge cars off the Pennsylvania Railroad onto narrow-gauge trucks to continue their journey over the EBT.

“Off in the distance there was what looked like another Timber Transfer,” Biemiller said, but it puzzled both men, who have studied EBT history for decades and never saw anything like it. They called up another record — a valuation map — which corroborated the existence of an older, smaller freight transfer crane near the enginehouse.

The link to search the Archives and Special Collections page is available here. On-line access is free; fees apply for digital or paper copies intended for external, personal, or commercial use.