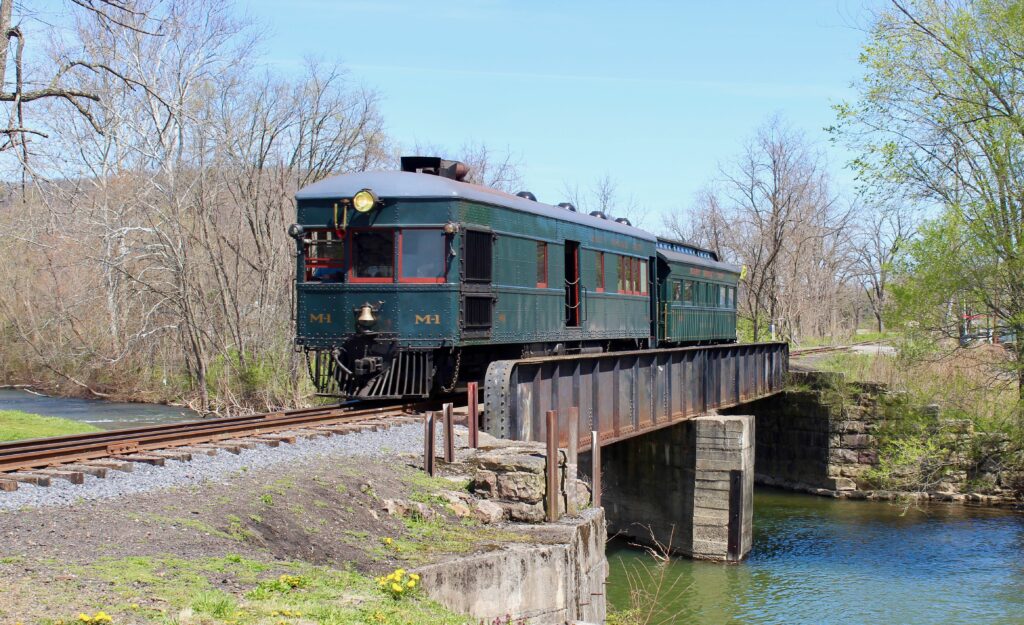 When East Broad Top General Manager Brad Esposito was cleaning up rock salt in a shed at the railroad’s shop complex last year, he didn’t bat an eye when he realized he was standing on wooden crates marked “dynamite.”

After all, the EBT stored just about anything in dynamite crates that had been emptied at rail-served mines. But when Esposito dug farther into the salt, he noticed telltale streaks of color coming from the crates. He knew at once that beneath his feet were five boxes loaded with the real McCoy.

“The fact that you’re still standing here talking to me means it’s probably not going to blow up,” a state inspector told him before experts safely burned the pile of decayed explosives in February 2021.

In a way, the dynamite discovery was a lot like other days at the historic narrow gauge railroad that is slowly revealing its secrets. Esposito says you never know what you’ll find in the time capsule shop complex that dates to 1873 or in the trove of company records being archived in the EBT headquarters and station in Rockhill Furnace, Pa. Part of the fun of the job, he says, is putting all of the pieces together, like unearthing documents that tell how the self-sufficient, coal-hauling railroad built and maintained its rolling stock.

A railroader’s railroader who spent two decades at Genesee & Wyoming, the down to earth Esposito is the sparkplug behind the unlikely revival of the East Broad Top. He was able to bring everything together to awaken this Rip van Winkle of a railroad: financial backing and unwavering support from big names in the industry, including Wick Moorman, Henry Posner III, and Bennet Levin. A solid business plan based on turning the EBT into a nonprofit able to tap millions of dollars in state and federal funding. And a dream team of staffers perfectly suited to their roles rebuilding locomotives, repairing track, drawing visitors, and cataloging oodles of documents dating to the railroad’s beginnings 150 years ago.

An April visit found the EBT buzzing with activity. A ride on the railroad’s magnificent M-1 Brill gas-electric motorcar showed off the track work performed in the 4.5 miles between the station and the wye at Colgate Grove. In the machine shop, the belts and shafts that drive equipment are once again spinning their magic, while off in the shadows work is progressing on 1882 coach No. 8 and 2-8-2 No. 14, sans running gear and stripped down to its boiler. Over in the roundhouse, Chief Mechanical Officer Dave Domitrovich and his crew have 2-8-2 No. 16 well on the way to steaming for the first time in 66 years.

Ask anyone at the EBT when No. 16 will run and you’ll get the same answer: “When it’s ready.” That’s smart because it avoids overpromising and underdelivering, a fate that has bedeviled some steam restoration projects.

“Everything in these things is Pandora’s box,” Domitrovich says. He views the locomotives with a sense of reverence, both for the machines themselves and for their place in the railroad’s history.

It’s an attitude apparent throughout the EBT, where the goal is to restore the railroad as authentically as possible. “We work very hard to make it look like we’ve done nothing at all,” Esposito says. But the team has a practical side, too. Four new near-replica coaches are on order. And despite plans to restore all six Mikes, Domitrovich is scavenging parts from other locomotives to speed No. 16’s rebirth. This is a case where robbing Peter to pay Paul makes sense.

More exciting is what’s eventually to come: resuming service south of Orbisonia for the first time since the EBT’s common carrier era ended in 1956. Director of Engineering James Roslund, a former G&W man, will have his hands full with this audacious project. The EBT didn’t splurge for treated ties, so what’s left of this 22 miles is literally just two rails running through the woods.

Moorman says that when he first saw the EBT in October 2019, he was, to use a British term, “gobsmacked.” I felt the same way in April. Visit the EBT and you will walk away impressed with this remarkable railroad and the people determined to preserve it.

(Note: The East Broad Top is open Wednesdays through Sundays from 9:30 a.m. to 5:30 p.m. and is offering train excursions, shop tours, and special events, as well as trolley rides at the neighboring Rockhill Trolley Museum. The railroad, located in Rockhill Furnace, Pa., is about an hour from Horseshoe Curve and the Altoona Railroaders Memorial Museum, which weaves together the history of the city, its people, and the Pennsylvania Railroad and is also worth a visit.)