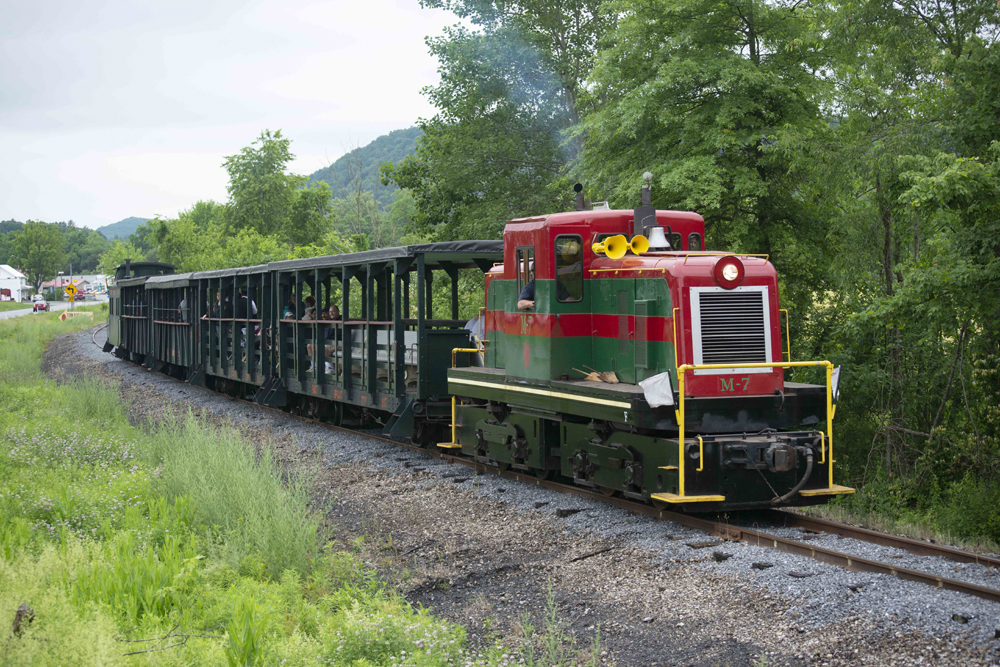 ROCKHILL FURNACE, Pa. – The East Broad Top Railroad reached a couple of restoration mileposts over the past week.

On Friday, June 11, it reopened for scheduled public passenger service for the first time in 10 years.

The owner, the nonprofit EBT Foundation Inc., has run trains for several special events. But this was the first scheduled service since 2011, when the former owners closed the historic central Pennsylvania narrow gauge line. Rolling stock, facilities, and the lion’s share of the original 33-mile line, about 27 miles, were sold to the Foundation in February 2020.

Earlier in the week, the railroad ran two special movements a mile farther north along its main line to the tourist-era destination of Colgate Grove. In both cases, the consist was 1927 gas-electric car No. M-1 and parlor car No. 20, the Orbisonia. The first trip took place on Tuesday, June 8, carrying the Foundation’s board to see the progress on track renovation, ballast placement, brush clearing, and drainage improvements. The second trip, run on Friday, June 11, carried members of the Pennsylvania House of Representatives’ Tourism and Recreational Development Committee to inspect the same work.

The railroad is aggressively pushing efforts to reopen the line to Colgate Grove for regular service, possibly within a few weeks. EBT crews and track specialists of the Friends of the East Broad Top volunteers have removed and are relaying track on the wye at the picnic grove. The south leg of the wye is nearly finished, and the work has shifted to the north leg and the main line.

During most of the tourist era, EBT took pride in the fact that its steam engines always pulled trains in classic form – engine first, facing forward, as opposed to backing or running tender-first. This was possible because a wye already existed at the south end of the run at the yards in Rockhill Furnace, and because a new wye was created in 1961 at the north end out of a spur that once ran to a clay pit. The new wye formed the basis for construction of a picnic area at what was dubbed Colgate Grove. For many years, EBT ran trains on an hourly schedule and invited passengers to bring a picnic to eat at the grove, then return on any later train. The EBT Foundation has plans to build new facilities at the site, including a platform and lighting, to permit use as an event venue for concerts, weddings, and the other such events. One of the grants it has received will support this project.

In the shops and roundhouse, restoration work continues on Baldwin 2-8-2  steam engines Nos. 14 and 16, with No. 16 being the first scheduled to return to operation later this year. New planking has been applied to the tender frame of No. 16, and its corresponding newly fabricated tender tank awaits installation.

Elsewhere, customer-focused amenities are being added, including landscaping around the station and general office, new sidewalks and station platform, a new crushed-stone parking area, and split-rail fencing to guide visitor foot traffic.