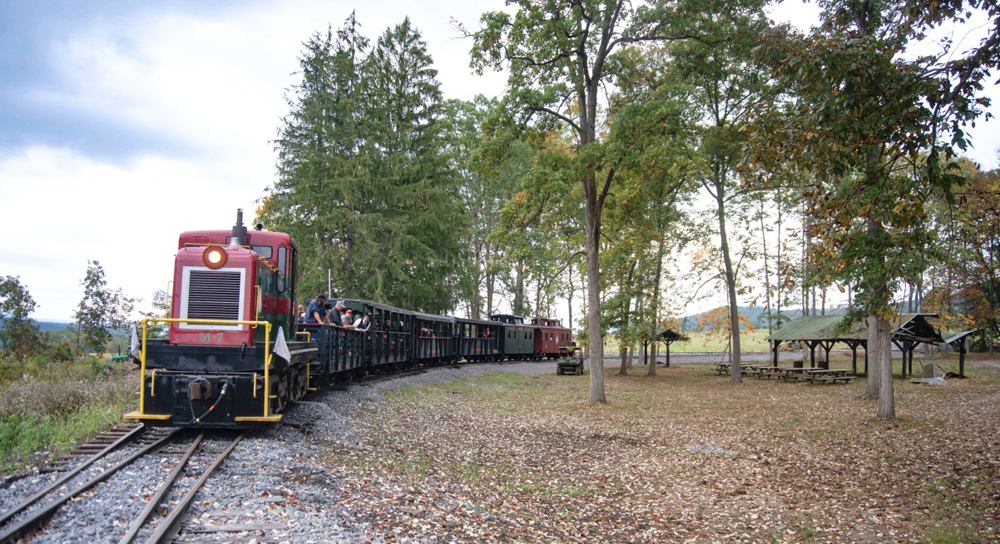 ROCKHILL FURNACE, Pa. – East Broad Top Railroad staff and volunteers went the extra mile – literally – to fully reopen the company’s line from here to its tourist-era (1961-2011) wye and picnic area at Colgate Grove, just in time for this past weekend’s Friends of The East Broad Top annual reunion.

Starting in 1961, EBT under the Kovalchicks offered seasonal steam-powered tourist runs on about 4½ miles of line, turning trains on wyes at both Colgate Grove and Rockhill Furnace, before closing in 2011 while the family sought a long-term future for the property.

As the 2021 version of the annual Friends reunion approached, EBT was planning to run trains only as far as the Runk Road bridge. But Jonathan Smith, EBT’s director of sales and marketing, said the work was progressing so well that General Manager Brad Esposito and Director of Engineering James Roslund made a push to reopen the entire 4½ mile line for all regular service, starting with Reunion trains, beginning on Friday, Oct. 8.

Some surfacing remains to be done, but with this part of the line essentially open, the next step will be to plan brush clearing and trackwork south of Rockhill Furnace to begin the process of extending operations toward the scenic mountainous area where now-shuttered coal mines supplied the bulk of EBT’s traffic. In all, the Foundation owns 27 miles of the original 33-mile main line.

For the three-day reunion event, EBT operated diesel, gas-electric, and speeder-car movements, staging 2-8-2 engine No. 17 (Baldwin, 1918) on a siding with a simulated coal train to signify the ongoing restoration work on two of the road’s six Baldwin Mikados, Nos. 16 (1916) and 14 (1912). EBT hopes to steam No. 16 within a few months, and is looking forward to running steam for the 2022 tourist season.

Scheduled trains for the public have all been hauled by center-cab General Electric switcher M-7, with occasional special appearances by M-1, the gas-electric car that EBT assembled in its shops in 1927 from parts supplied by the J.G. Brill Co. For the Reunion, M-1 sported a new roof that was funded by a $15,000 grant from the John H. Emery Rail Heritage Trust, and EBT staff repainted the roof gray, its common-carrier-era color, abandoning the brick-red color that had been applied during the tourist era. During a General Manager’s Shop Tour for FEBT members, Esposito announced that grant money left over from the project will be applied to repainting the carbody, which contains a 12-passenger section as well as areas for baggage, express shipments, and mail.

Esposito also gave a report on the steam locomotives, saying:

— The front tube sheet on No. 16 has been renewed, and tubes and flues are on hand, ready for installation. But because the engine has been idle since the road ended common-carrier service in 1956, it will require calculations for federal Form 4 certification, which are under way and are more easily completed before tubes and flues are installed.

— No. 14 has cracked drivers, which will require newly fabricated replacements.

— No. 15 (1914) already has a Form 4 certificate because it was renovated once before and in fact was the last engine EBT operated before the 2011 shutdown. It may be the next engine returned to service after 16 and 14, he said.

— No. 12 (1911), the smallest and oldest of the engines, was run extensively during the tourist years, but is a sentimental favorite of some of the restoration crew.

— Nos. 17 (1918) and 18 (1920) are “tired,” he said, because they were the last engines used in common-carrier service. When the railroad was hanging on, month to month anticipating abandonment, EBT “beat the snot out of them” and performed only minimal repairs.

Esposito also said patronage has been heavier than expected, even without the attraction of steam locomotives. In the category of good problems to have, he noted that parking has become an issue because visitors are staying for 3 or 4 hours to take in shop tours and trolley rides at the adjacent Rockhill Trolley Museum, instead of just riding the EBT train and going home.

The shop tours have become especially popular, with many of them being sold out after reaching the group-size limit of 20 people. Smith said on the 30 days they have been offered from May to October, 996 participants took part.

Consultant Linn Moedinger, retired president and CEO of the Strasburg Rail Road, has described the shops this way: “They can go from raw materials and build just about anything. It’s all the way it was in 1950 and a lot of it is the way it was in 1910.”