Well-traveled writer maintained enthusiasm and sense of adventure across decades 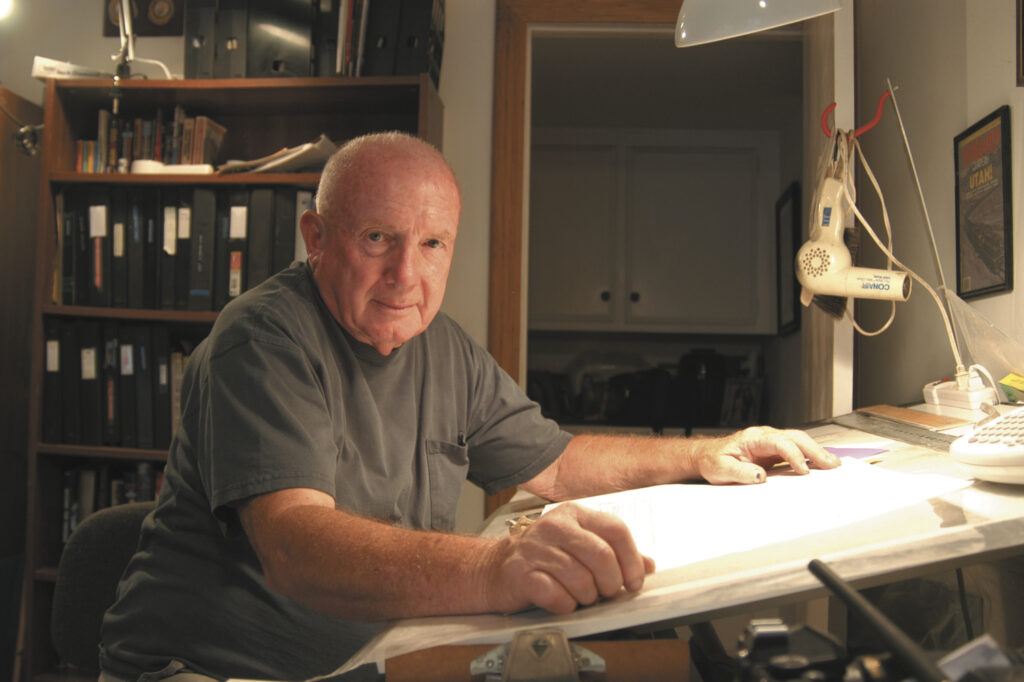 Donald Sims, a prolific author and photographer whose work was often featured in the pages of Trains Magazine, died Saturday after a brief illness. He was 93.

Sims, who lived in Poulsbo, Wash., with Reva, his wife of almost 70 years, died after being admitted to a hospital earlier in the day, surrounded by his wife and his three children.

A renaissance man in the truest sense of the phrase, Sims taught college economics, and worked various white-collar, private-industry jobs, as well as spending time as a railroader. He fired for the Chicago, Burlington & Quincy, was a clerk for Santa Fe, and while attending UCLA was a carknocker for Southern Pacific. When he wasn’t repairing one of his automobiles or working in his garage darkroom, he was canvassing the countryside photographing railroading in every form. There was no train or railroad setting that wasn’t captured by his cameras, in formats ranging from a 4×5 Speed Graphic to 120 roll film to 35mm.

He maintained his enthusiasm for railroading even as it went through decades of dramatic change.

“If you think about it,” he said in a 2004 article in Classic Trains, “the subject matter really hasn’t changed a bit. I still like to shoot diesels, electrics, transit lines, mountain railroading, desert railroad, and urban railroading. I love railroading and the people who do it.”

Growing up in New Jersey before his family moved to the west coast in 1943, and later alongside longtime friend Dick Steinheimer, Sims always wanted to find whatever was on the other side of the next hill. When a railroad separated from the highway, Sims would nonchalantly pull a dirt bike out of the back of his van, and camera in hand, roar down the right-of-way for the next photo opportunity.

He chronicled his adventures — some with “Stein,” and others with Reva — in numerous magazines. He especially enjoyed working with Trains editor David P. Morgan along with authoring a number of hardcover books. Very much a man of his time, his writing clearly showed his love of the subject, as he penned feature articles describing every facet of railroading and railroaders. His byline covered railroading in almost every state and he had regular assignments from Southern Pacific, Alco, General Electric, and German diesel hydraulic maker Krauss-Maffei, among others.

Sims mastered the difficult art of night photography using Heiland flash guns and large No. 2 flashbulbs (about the size of a 100-watt light bulb) to paint with light. Always willing to share his knowledge, he carefully showed more than one neophyte the importance of not only lighting a locomotive from the camera angle, but also popping off a bulb from behind it aimed at the trucks and fuel tank to separate it from the background.

It was not lost on Sims that he was a witness to history, and not just the transition from steam to diesel railroading. He recalled, for instance, seeing the German dirigible Hindenburg on its way to Lakehurst, N.J., on the day it exploded, and looking out the window of a Key System interurban car he was riding in Oakland and watching a PanAm Clipper taking off for the Far East.

In his later years his cameras changed to Bronicas, Nikons, and a pair of Pentax 6x7s, and his Chevy Greenbrier van— which he started for years with a large screwdriver after losing the ignition key — was replaced with a newer vehicle.  Refinements aside, however, Sims never lost his desire to see what lay just over the next hill.

After retiring from work in Southern California, Don and Reva moved first to Montana before settling down in Washington state.

2 thoughts on “Donald Sims, prolific author and photographer, dies at 93”