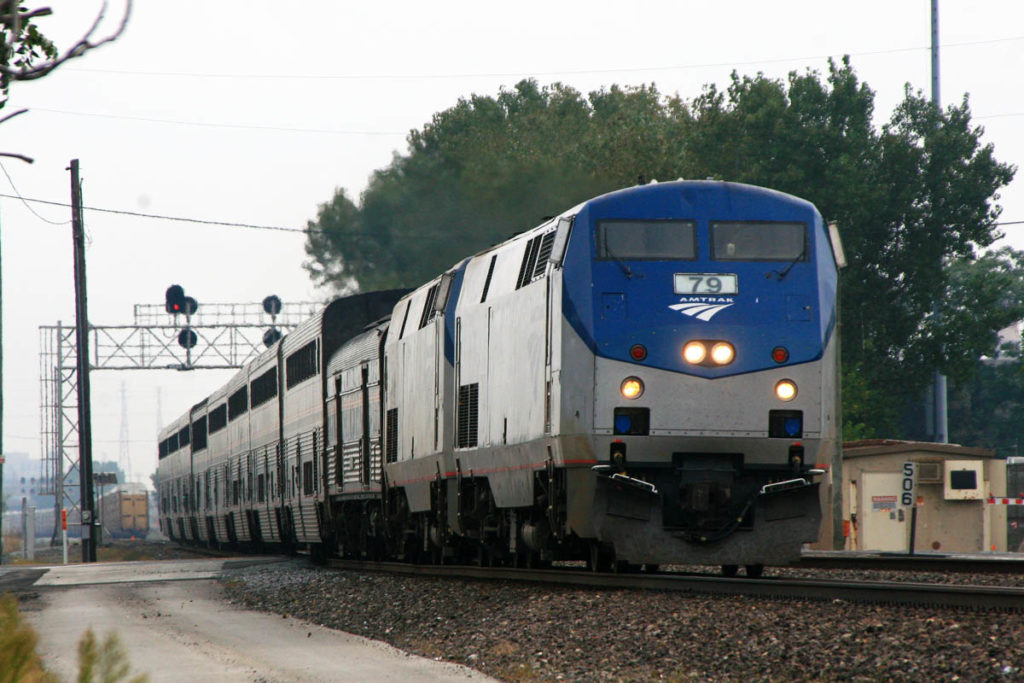 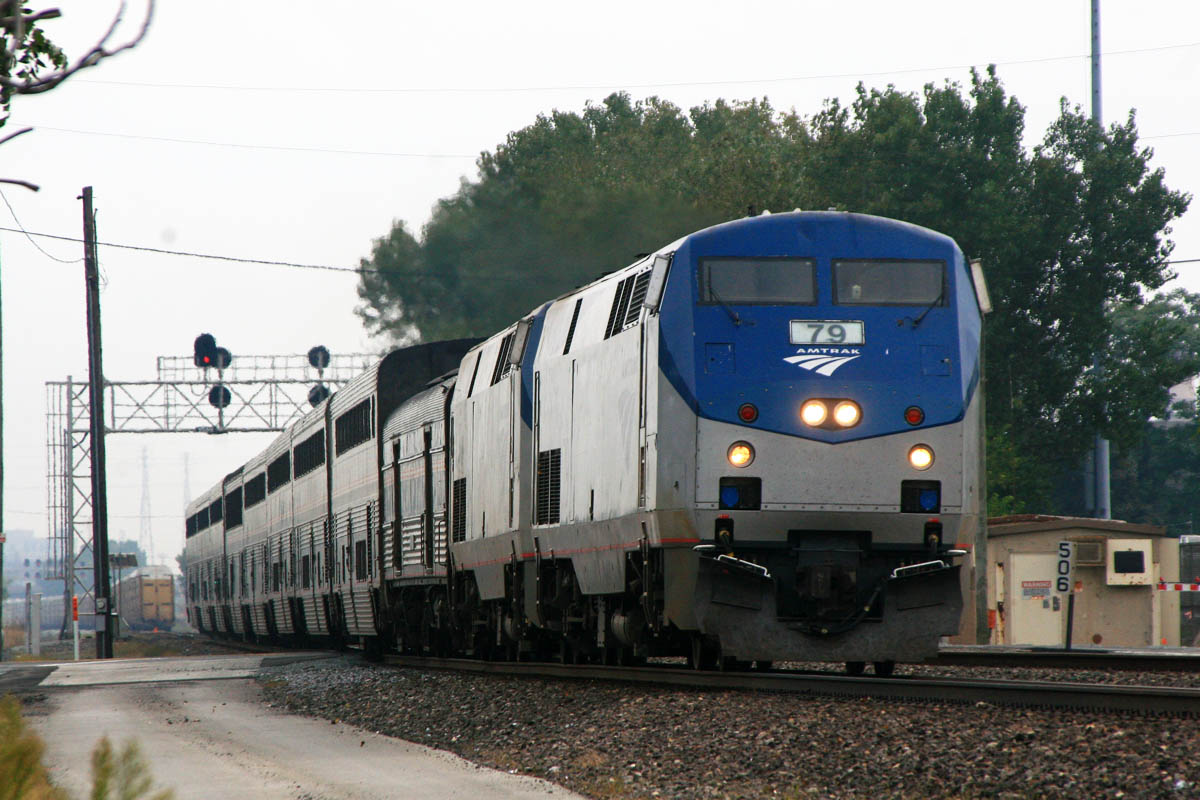 Running four hours late, the westbound ‘Capitol Limited’ passes Whiting, Ind., on Oct 2, 2014.
Bob Johnston
CHICAGO – The hours-long delays have begun to disappear not only from Norfolk Southern’s Chicago-Toledo segment of the Capitol Limited, but also on the Empire Builder route. The improvements follow an Oct. 6 letter from Surface Transportation Board Chairman Daniel Elliott III to NS Chairman Wick Moorman asking for a detailed explanation about what the railroad is doing to improve Amtrak on-time performance. In the meantime, Amtrak has implemented short-term strategies to reduce its own delay costs and minimize departure delays.

Because Capitol Limited and Lake Shore Limited equipment and Toledo-based operating crews normally make a same-day turn at Chicago, chronic westbound tardiness of the two trains arriving on Oct 4 caused the eastbound Capitol to depart at 2:54 a.m., more than 8 hours past its scheduled 6:40 p.m. Chicago departure. Missing all connections was unacceptable, so busing to and from Toledo began the next day and lasted for a week while NS dealt with its congestion.

Management has also decided that effective immediately, westbound Lake Shore Toledo-based crews will lay over in Chicago and handle the next day’s eastbound Capitol to avoid having that train’s departure delayed waiting for mandatory crew rest. Westbound Capitol crews will then have sufficient rest time to make a same-day turn back to Toledo on the eastbound Lake Shore. Once those moves were made, both eastbound trains have departed Chicago either on-time or less than 10 minutes late every day. This last happened in mid-April.

A contributing factor has been the Empire Builder’s improved eastbound performance after it flipped North Dakota routes with the westbound train on October 5 (News Wire, Oct 3), since the Lake Shore was often held as the Builder’s only guaranteed eastbound connection at Chicago. The train from Seattle actually arrived on-time from Seattle at 3:55 p.m. on Oct. 13 and 20 minutes early the next day.

Alas, Mondays through Thursdays from Oct. 20 through Nov. 13, Canadian Pacific track work dictates that eastbound train No. 8 can’t leave St. Paul, Minn., until 10:30 a.m. On Tuesday, passengers had to wait almost three-and-a-half hours after a 7:06 a.m., 40-minute-early arrival. Westbound train No. 7 is unaffected, because its passage does not conflict with maintenance curfews. 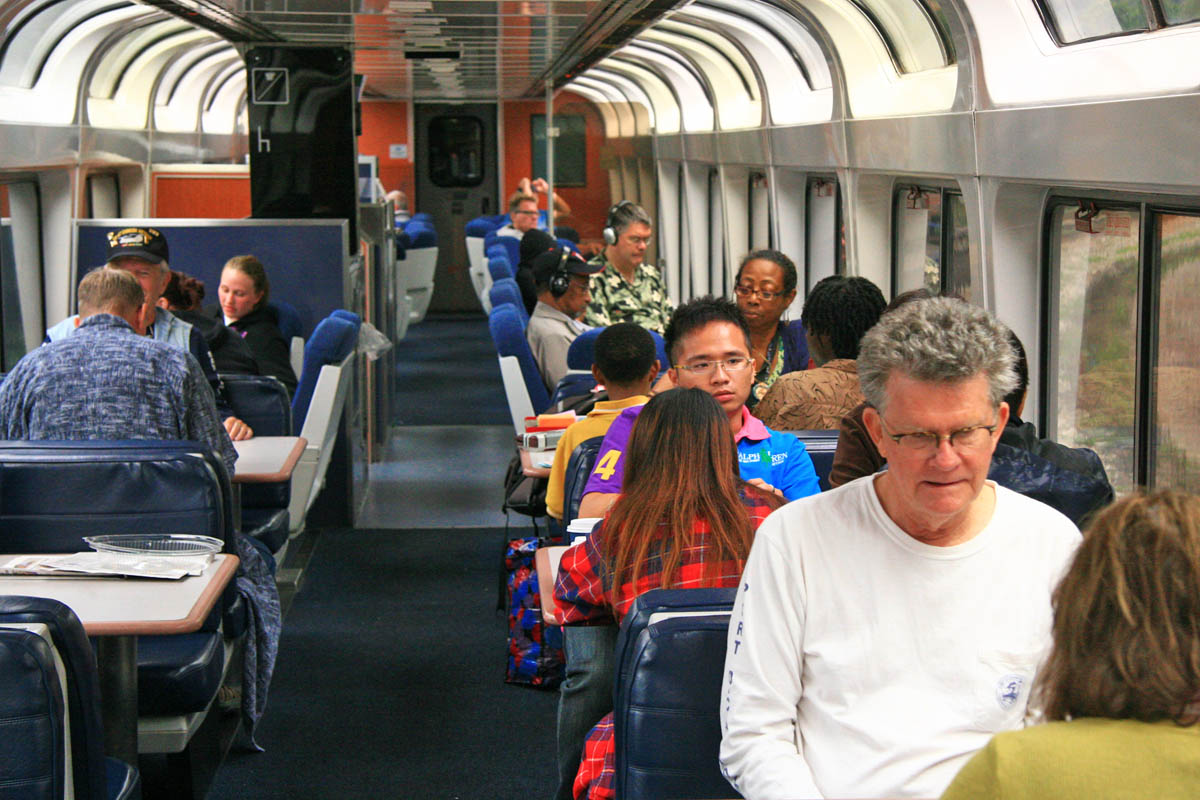 Passengers jam the ‘Capitol Limited’ Sightseer lounge on Aug. 15, 2012.
Bob Johnston
Meanwhile, although fluidity on the Norfolk Southern east of Chicago has recently improved under increased STB scrutiny, Amtrak is creating a fourth set of Capitol Limited equipment by dropping one coach and the transition sleeping car (the second sleeper will be available for crew but not be staffed with an attendant), replacing the Sightseer Lounge and full diner with a 37000-series Superliner café-lounge, and utilizing the lower level of a baggage-coach for checked baggage. The resulting five car consist can be hauled by one locomotive instead of two, thus saving on fuel and the labor cost of several on-board service employees. The changes became effective eastbound last Monday and westbound Wednesday. Reduced Capitol consists are to continue through Nov. 18 eastbound and Nov. 20 westbound.

Shrinking capacity during periods of lighter demand is nothing new and the Capitol Limited traded its lounge and diner for a café-lounge shortly after the cars were converted from full diners in 2006. But the bid to reduce labor costs also significantly diminished the on-board food service and lounge experience and was soon abandoned on the Capitol and City of New Orleans, which got their Sightseer Lounge cars back.

As of late Tuesday through Oct. 30, seven of the 18 Capitol Limited departures have no bedrooms available and eight trips still have Chicago-Washington coach seats available at the lowest $94 price. But one departure in each direction is already sold out of either coach or sleeping car space, and last minute travelers could be out of luck. Though Amtrak can easily quantify the cost savings, the impact of ridership and future revenue losses will be harder to measure when coupled with the fallout of ongoing delays.