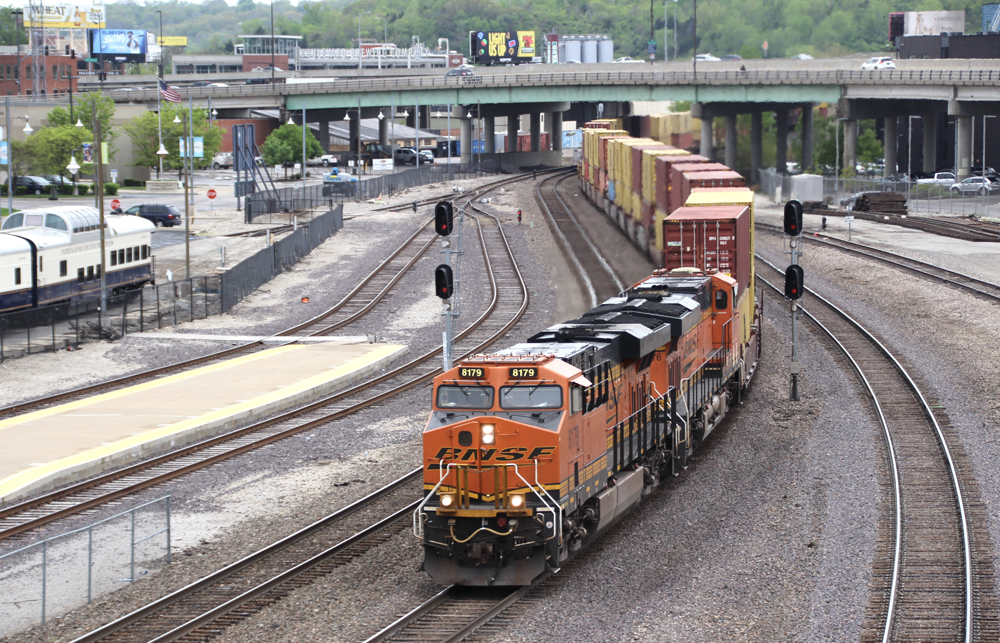 KANSAS CITY — Service and labor issues are generally the defining issues for current public appearances by railroad officials, and so it was Tuesday when BNSF Railway CEO Katie Farmer spoke to the North American Rail Shippers conference.

Less than two weeks after officials from BNSF and other Class I railroads were called to testify before the Surface Transportation Board over service issues, Farmer said that BNSF had been “well down the path of implementing some aggressive measures to restore that network productivity” even before the STB hearings.

In outlining the problems that led to the current service issues, Farmer noted that as service deteriorated, shippers pushed more railcars into the system in an effort to keep their goods moving.

“And that just has the effect of slowing velocity and consuming more resources,” she said. “Just to give you some perspective, we have about 5% more railcars on our system this year, moving 5% less volume compared to last year. And that’s not a productive place for us to be.”

Changing that, she said, is one of the three areas where BNSF was acting aggressively. The railroad is “working with customers to really try to better manage that active car inventory on the network. That’s really one of the more impactful levels we can work on. That has helped us over the last several weeks to really get our active inventory down.”

The other facets of that effort are returning locomotives to service, and increasing staffing. The railroad has recalled all furloughed crews “in key areas,” Farmer said, and plans to hire an additional 1,800 crew members: “We’re going to pull forward some of our 2023 hiring.”

Addressing a different aspect of the railroad’s labor situation, Farmer said recent history shows negotiations for a new national labor contract is a two- to three-year process, although that timeline has been extended in the current negotiations by pandemic-related delays. She said BNSF was setting aside funds for raises in anticipation of an agreement.

But she also reiterated the industry’s desire to move to one-person crews, which is a sticking point in those negotiations.

“Railroad jobs, as most jobs, have always evolved over time,” Farmer said. “At one point we had five employees on our trains … As new technologies have become available to us, once implemented, it changes the face of work.”

And she linked BNSF’s positive train control efforts its efforts to introduce the one-person crews, noting that the railroad has installed the safety system beyond what was required by federal law. “We’re actually at the point right now where fully 93% of all of the volume that moves on our railroad has positive train control as a safety overlay,” she said. “And what that allows us to do is it allows us, just like many parts of the world, just like with Amtrak, just with commuters, to operate with one person in the cab of a locomotive.”

“What I do want to say is that doesn’t mean that conductor job is unnecessary. Not at all. What it means is that the nature of the work is going to change.” A moved to ground-based conductors, responsible for multiple trains, will allow those crew members “to have a more predictable work schedule,” she said.

“We think this is good for the industry. It allows us to evolve and compete, which we need to do. I can promise you other modes of transportation are not slowing down on evolving and deploying technology. So railroads need to remain competitive.”

Farmer, who had been scheduled to appear in person, addressed the conference via a Zoom call, saying her planned flights on Monday evening and Tuesday morning had both been scrubbed because of aborted takeoffs.