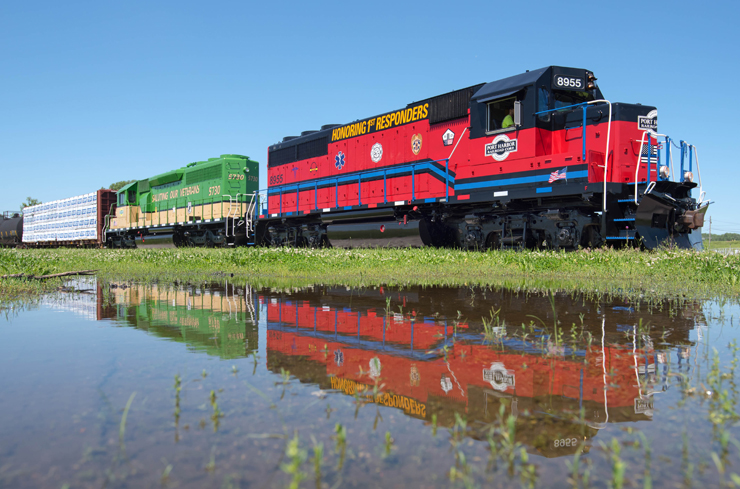 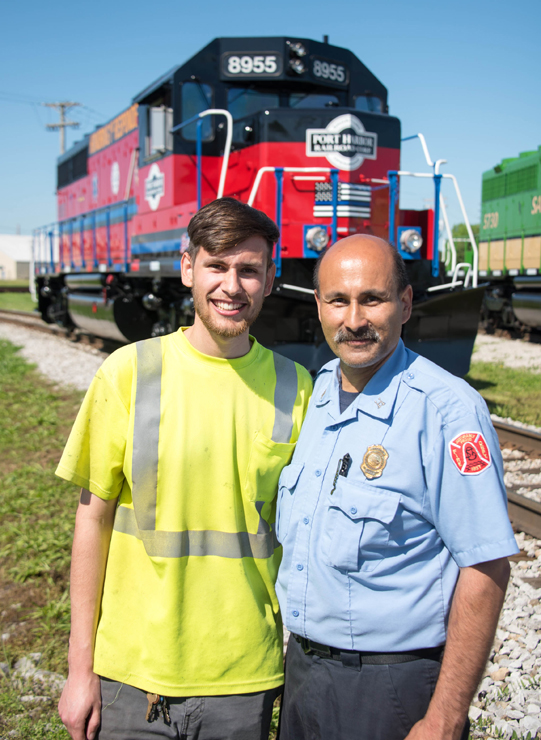 Port Harbor’s Dominic Montero, left, designed the paint schemes for the two locomotives. He was joined at the unveiling by his father, Mario, of the St. Louis Fire Department.
Steve Smedley

“I’m very proud of my son, and it’s dear to my heart that he really thinks that highly of our first responders and veterans,” the elder Montero said.

Dominic Montero said the locomotives are “our little but still kind of our big way to say thanks to our first responders and our veterans and tell them how much we appreciate them. The cherry on top was seeing how thrilled my Dad was; he was the inspiration behind it. … I am excited that people can drive by and see the locomotives and know we are honoring them.”

The Port Harbor is a Class III railroad that interchanges with the Terminal Railroad Association of St. Louis and serves industries at America’s Central Port, a former Army supply base in Granite City. Several Port Harbor employees are current or former first responders or veterans.

CEO and Vice president of marketing and customer solutions Carl Yount was a Marine Corps staff sergeant who saw combat in Vietnam. “These are two beautiful locomotives,” Yount said. “We wanted to increase public awareness of our veterans’ service and sacrifices, and our first responders who serve us every day.’’

Dan Walford, a talented railroad fan and photographer, is a 24½-year Navy veteran who served as a flight officer on P3 Orion aircraft. “It’s nice to see that first responders and veterans are appreciated and these folks care enough to spend money showing that.”

The preparation and painting work were done by Quality Rail Service in Madison, Ill., about a mile away from the port. Master painter Kevin Scifres lead the repainting projects on both units, suggesting improvements. “These folks at Quality Rail most definitely live up to their name,’’ said Road Foreman of Engines Eddie Bauer.

On an unfortunate note, thieves stole the horns off No. 8955 and another unit. The horn on No. 8955 was owned by Dominic Montero. The Port Harbor is asking for people to watch for the horns or if they show up for sale.