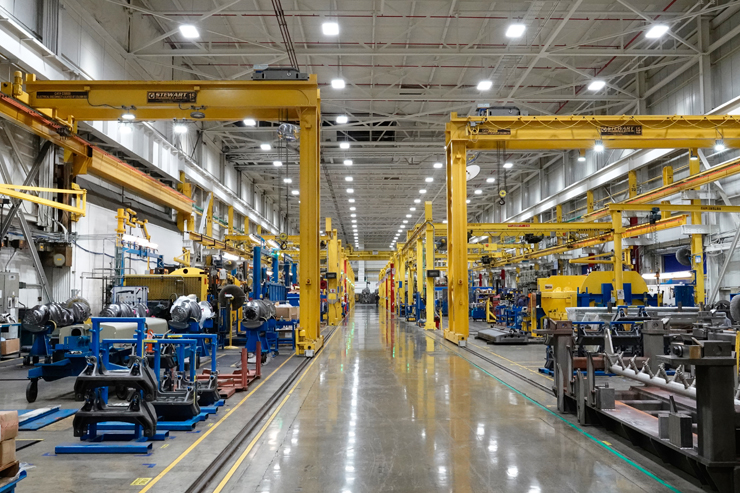 These are two of the three assembly lines of Wabtec’s Grove City (Pa.) engine manufacturing plant. To the left is the line for Evolution Series engines; to the right is the line for FDL units.
Dan Zukowski

GROVE CITY, Pa. — It may not be as well-known as final-production facilities in Erie, Pa., and Fort Worth, Texas, but the actual power in Wabtec motive power comes together in a plant in this city about 60 miles north of Pittsburgh.

Tucked between I-80 and I-79, the borough of Grove City, population 8,290, is home to Wabtec’s engine manufacturing and remanufacturing plants, acquired in the company’s 2019 merger with GE Transportation. General Electric bought property in the northwest corner of the city in 1970.

On the occasion of Wabtec’s 150th anniversary, the $8 billion transportation industry giant invited Trains News Wire to Grove City tosee how its diesel engines are manufactured.

The 440,000-square-foot engine manufacturing plant can produce up to 1,500 new diesel engines a year. Those include both FDL and Evolution Series engines in Tier 2, 3 and 4 configurations, along with marine engines and a new high-speed engine that primarily serves export markets.

The plant has the capability of producing almost everything in-house except castings and forgings. Those come in raw and, except for crankshafts, are machined on-site.

Every component is barcoded and tracked throughout the manufacturing process, and beyond. “We’re going to build a typical engine three times here in Grove City,” says John Singleton, plant manager. “We’re going to build it once here at this site and then we’re hopefully going to overhaul it two or more times at the other [remanufacturing] site. We know a lineage of every single part as it is built, as it is remanufactured, and as it comes back full circle.”

At different points in manufacturing, parts are pinpoint-checked by laser on a Coordinate Measurement Machine (CMM) to verify dimensions precisely match specifications. While smaller components can be checked on a tabletop-size CMM, whole engine frames are air-floated on a skid to one of two large, multimillion-dollar CMMs, where they undergo detailed testing.

Singleton explains those machines measure thousands of data points on each frame, and will be tested multiple times at separate stages of manufacturing.

While the measurement systems are largely automated, the plant has few robots. Those used serve mainly to move or manipulate large, heavy components. 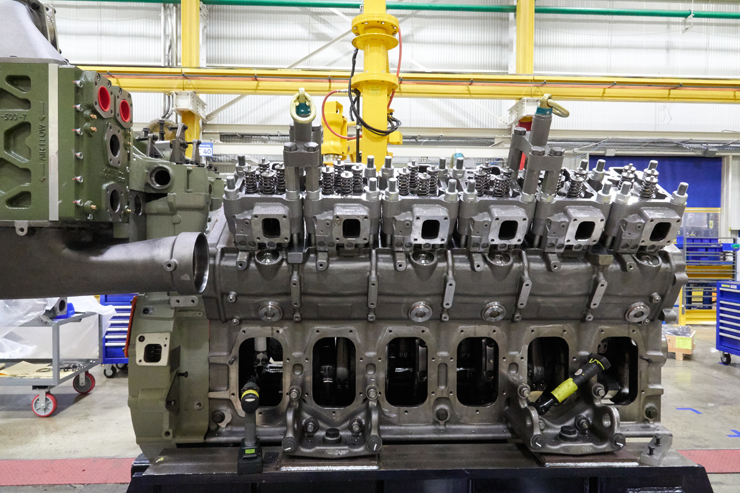 One of Wabtec’s high-speed engines destined for export.
Dan Zukowski

Ultimately, those components come together at one of three assembly lines: one for all FDL engines, one for all Evolution Series engines, and one for the high-speed engine. Currently, the plant turns out two new engines each day.

As each engine is completed, it is run and tested for emissions and load factor. “We run through a specific break-in period to seat the rings on the liners,” explains Singleton. “That’s a set number of minutes per notch, and once we get up to notch 8 we hold that for an hour.” That’s followed by a complete engine inspection and review of the voluminous test data before it’s shipped to the Erie locomotive plant.

The first two 2,500-hp, 12-cylinder engines were in production as Trains toured the engine manufacturing plant, destined for Kazakhstan Temir Zholy (KTZ), the country’s national railway, as part of a 300-unit order for switching locomotives.

Jim Gamble, Wabtec’s engine engineering leader, explains, “As the rest of the world transitions from non-emissions to some kind of emissions norms, it sets us apart from the older engine technologies that are out there. We developed this engine specifically with the rail duty cycle in mind.”

Not all the components manufactured here go into brand-new engines. “A lot of the parts that we’re making go directly to the field or to the other facility as replacement parts, in addition to what we serve ourselves on the assembly line,” says Singleton. Those components serve 23,000 locomotives across the globe.

The 240,000-square-foot remanufacturing plant at Grove City, opened in 2012, churns out 1,200 remanufactured engines a year, with complete teardowns per required overhaul schedules.

With 1,000 workers at both plants, Wabtec is one of the biggest employers in the region, providing well-paying jobs. “Engine producing is one of the major vital organs of the company and that vital organ sits here in Grove City,” says Marty Thomas, Wabtec’s global engine supply chain leader.