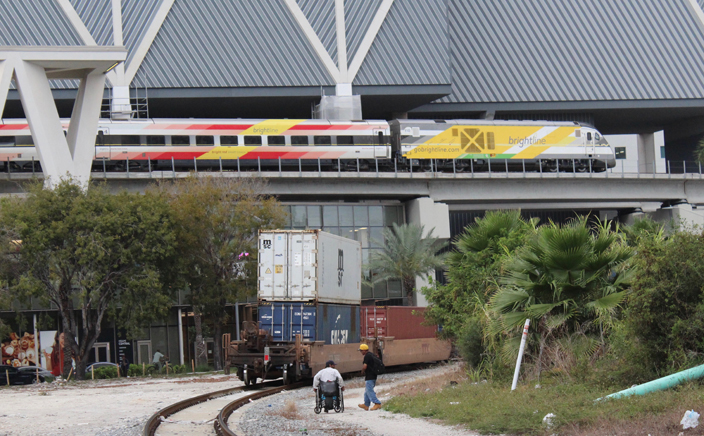 A Florida East Coast Railway transfer from PortMiami has moved past trespassers on the right-of-way, and waits for a Virgin/Brightline train to depart MiamiCentral station on May 3, 2019. Virgin Trains USA is prepared to build a station at the port after Miami-Dade commissioners approved a deal this week.
Bob Johnston 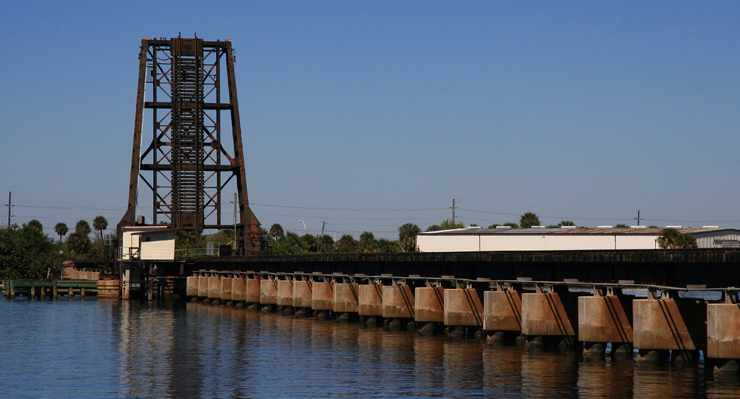 Virgin Trains USA says it will eventually replace this single-track drawbridge over the St. Lucie River at Stuart, Fla., with a double-track bridge allowing greater clearance for boats to pass without opening the span.
Bob Johnston
MIAMI — The company still branding itself as Brightline is moving forward with robust infrastructure initiatives, even though service beyond West Palm Beach won’t commence until new trackage is completed to the Orlando area for about three years.

This week, Virgin Trains USA President Patrick Goddard announced plans to begin serving PortMiami with a $53.3 million station project that will enable direct passenger transfers between cruise ships and trains to Disney World, Miami Today is reporting. In return for its $5.2 million investment, Miami-Dade County expects to receive $49 million in rent and passenger fees over 30 years.

The agreement allows Virgin to build a $15.4-million, 20,500-square-foot station on port land; $35 million is being allocated to the purchase of another trainset. The company has previously reported it intends to add more Siemens locomotives and passenger cars — including a cafe car — once service to Orlando begins.

Earlier this month, Miami-Dade commissioners approved investing $76 million in a new station at Aventura, about 16 miles north of Virgin MiamiCentral, and the company has begun negotiations with Boca Raton officials for a station there, 27 miles south of West Palm Beach.

Rusty Roberts, Virgin’s vice president of government affairs, says vertical clearance in the closed position will be 18 feet, instead of 6.5 feet with the current bridge. This means many recreational boats won’t require a bridge lift as they do now.

Roberts says the new bridge is expected to cost $100 million and won’t be ready when trains first begin running to Orlando, but the structure and higher accompanying approach tracks can be built while the old bridge is still in use.

Local boat owners, including former American Airlines President and Chairman Robert Crandall, led years of opposition to Brightline, but Martin County eventually came to an agreement with Virgin that did not call for the bridge’s replacement among promised infrastructure and safety improvements. However, a new double track bridge that doesn’t require as many lifts will eliminate a choke point that would otherwise negatively impact both freight and passenger train reliability.