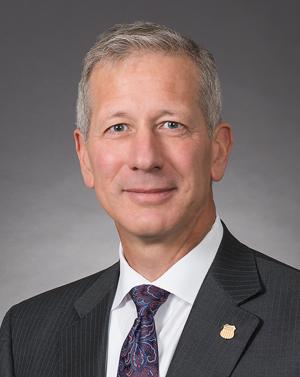 Lance Fritz, Union Pacific CEO
Union Pacific
NEW YORK — With major changes under way at Union Pacific, which is cutting costs and shifting to an operating plan based on Precision Scheduled Railroading, what does it mean for the railroad’s long-running steam program?

“We’re not sure. But right now, nothing,” UP CEO Lance Fritz told Trains today in an interview on the sidelines of the RailTrends 2018 conference. “We’ve got a full steam agenda in 2019 because of Promontory. After that, there’s no sacred cow but I don’t have any plan to do anything different than what we’re doing right now.”

There’s no question that the steam program generates positive attention for UP, Fritz says.

“But a lot of it is railfan attention,” he says. “The question is: Is that a big value add versus what’s required to maintain it. It’s not that big of an asset burden. So it’s not like the math is complex. But we’re not even worried about that math right now. For 2019 we’ve got a big program.”

At the UP steam shop in Cheyenne, Wyo., the UP steam crew is busy completing an overhaul that will return Big Boy 4-8-8-4 No. 4014 to service.