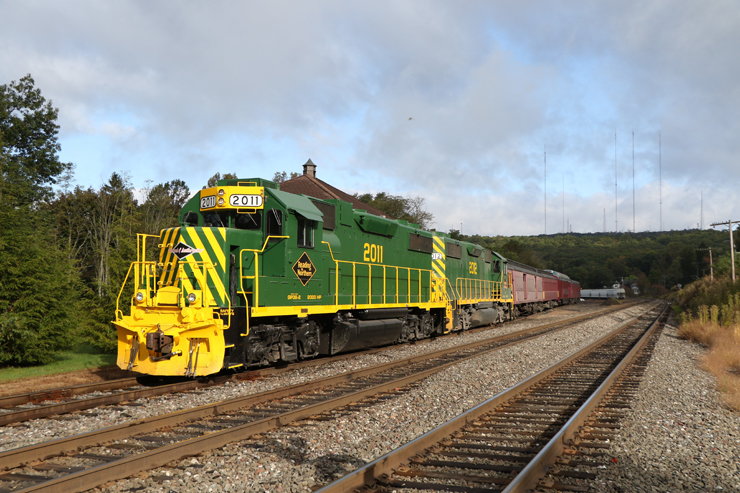 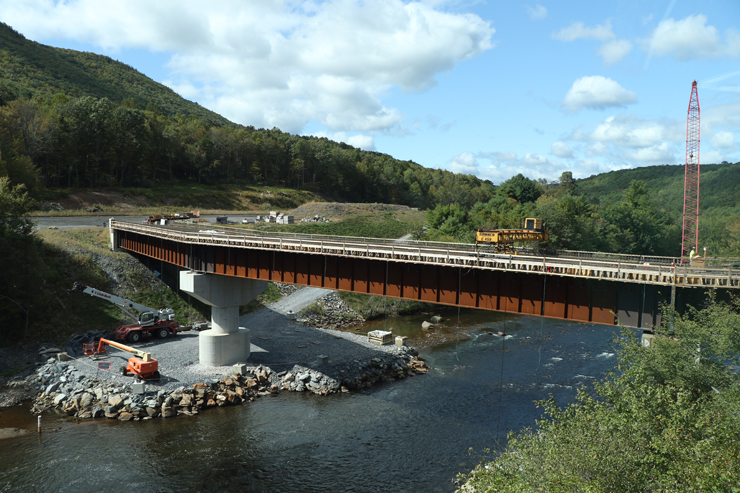 Viewed from the upper level of Reading & Northern full-length “Super Dome” No. 4 on Sept. 24, 2019, the new $14 million bridge over the Lehigh River at Nesquehoning Junction, Pa., will allow the railroad’s freight trains to make their Reading to Wilkes-Barre run without changing ends.
Scott A. Hartley
PORT CLINTON, Pa. — Pennsylvania regional railroad Reading Blue Mountain & Northern (commonly known as Reading & Northern) expects to cut a day off travel time for cars moving over the length of its system when a new bridge at Nesquehoning Junction opens late this year. R&N owner and chairman Andrew M. Muller, Jr., showed the nearly completed bridge to railroad customers riding a special “appreciation” train last week. He says that the new bridge over the Lehigh River will permit “progressive” movement of trains running between Reading and the Scranton/Wilkes-Barre area. Currently, trains must change direction in nearby Jim Thorpe to continue to their destinations.

A Pennsylvania state grant is covering $10 million of the $14-million project, with the railroad picking up the balance. Muller tells Trains News Wire that he saw the need for the bridge more than two decades ago, following the railroad’s purchase of a portion of Conrail’s former Lehigh Valley Railroad main line. At the time, he already owned a network of former Reading Company lines, and had operating rights over a section of a former Central Railroad of New Jersey branch that would connect the two divisions. However, R&N trains needed to use a segment of trackage owned and dispatched by Conrail (and after 1999, Norfolk Southern). In 2003, R&N reactivated a long-dormant ex-CNJ bridge at Nesquehoning Junction in order to bypass NS tracks, but R&N trains needed to change directions near Jim Thorpe.  With the state grant, construction on the correctly oriented new bridge began in 2017.

Reading & Northern car counts between Scranton/Wilkes-Barre and Reading have continued to climb.  The railroad interchanges with Norfolk Southern at each end, and R&N’s customers’ cars can move in either direction. R&N is increasing trains speeds as additional welded rail and Centralized Traffic Control is installed. Muller expects the new bridge will allow a Reading-based crew to make the 230-mile round trip to Wilkes-Barre and back in 10 hours. Currently, “Fast Freight” crews out of each endpoint make a turn to Jim Thorpe to handle through cars.

Reading & Northern is unusual among small railroads as it operates scheduled freight trains on its main lines. Muller takes pride in on-time operations. The crew of the North Reading-Jim Thorpe Fast Freight is well aware of the chairman’s interest: They know that Muller often eats lunch at a restaurant near the R&N tracks in Tamaqua. He comments, “If the train is more than 5 minutes late, I’m on the phone to find out why.” Muller is quick to point out that this rarely occurs.

Muller hopes that tracks will be installed on the new bridge during November. If all goes well, he told riders on Tuesday’s customer train, Muller plans to take his wife on the business train to make the first trip over the bridge on Christmas.