While Virginia plans will add a third and fourth track on much of the route between Washington and Richmond, two-track street running will remain in Ashland, Va.
Bob Johnston

ASHLAND, Va. — Since the 1830s, passenger and freight trains have rumbled down the middle of the street in Ashland, an otherwise sleepy college town 11 miles north of Staples Mill Road station in Richmond, Va. That won’t change, even though the state intends to add third and fourth tracks elsewhere on former the Richmond, Fredericksburg & Potomac route as part of a $3.7 billion capacity and frequency expansion announced by Gov. Ralph Northam in December [see “Virginia, CSX announce major rail infrastructure plan,” Trains News Wire, Dec. 20, 2019].

“We’ve committed to keeping that as a two-track segment, so in Ashland CSX will own one track and we’ll own the other track,” Virginia Department of Rail and Public Transportation Director Jennifer Mitchell tells Trains News Wire.

The state deferred to community wishes by rejecting proposals for a bypass or more tracks, so Ashland promises to be a challenging choke point for dispatchers choreographing Amtrak and CSX movements, as the state has plans to double the number of trains it sponsors on their way to and from Newport News, Norfolk, and Richmond.

Additional service is also planned along the Norfolk Southern as far as Roanoke, Va., which now hosts one state-supported round-trip. Though NS declined comment, Virginia spokesman Chris Smith says the state is working with the railroad on both expanded Virginia Railway Express frequencies and possibly an extension beyond Roanoke. The last vestige of what was once the route of joint Southern Railway-Norfolk and Western’s Tennessean (a.k.a., the Chattanooga Choo Choo) had ended at Bristol, Va., and was finally dropped when Amtrak began in May 1971.

That was also when the U.S. Department of Transportation strategists decided to jettison N&W’s Pocahontas from Norfolk through Roanoke to Cincinnati, but retain the Newport News section of Chesapeake & Ohio’s George Washington as part of a Chicago-Washington, D.C., route. Remaining service across Virginia devolved to buses when Amtrak subsequently rerouted the Newport News train to the Northeast Corridor as the Colonial in 1976

Now, by purchasing CSX-owned tracks currently leased to the Buckingham Branch Railroad west of Doswell, Va., the state might establish an east-west corridor from the Tidewater region through Richmond’s Main Street Station to Charlottesville, where it would join the Cardinal’s route to Clifton Forge.

While acquisition of the Buckingham Branch preserves the rails for passenger rail use, Virginia’s Smith tells Trains News Wire, “The new financial commitment does not include increases in Cardinal service. Once the transaction is final, the state will examine the Doswell to Charlottesville segment where no passenger rail services currently operate.” 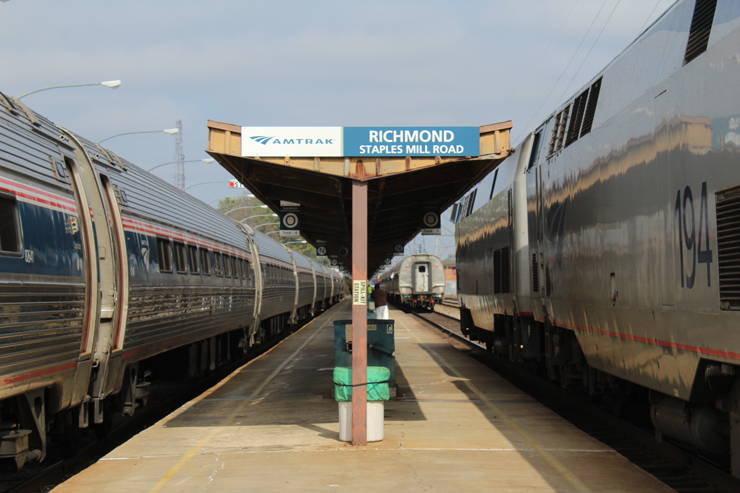 Though current Amtrak management seeks to adopt multiple-frequency corridors and has bemoaned the poor financial performance of its two tri-weekly trains, the Cardinal and Sunset Limited, the passenger railroad has not made any public push to explore daily Cardinal service with its host railroads. This is despite a study, required by the Passenger Rail Investment and Improvement Act, that showed daily operation could dramatically reduce losses while increasing ridership, because revenue would then be generated seven days a week against fixed route costs instead of three. The company has pledged to contribute $944 million to Virginia’s endeavor, but without the state’s support, none of that money will flow to the Cardinal.

Virginia initially entered the passenger game by augmenting Amtrak north-south service with a state-sponsored Washington-Richmond round trip, but its investment mushroomed when the legislature established a dedicated Rail Enhancement Fund in 2005. The first capacity project it helped finance was the completion in 2007 of a double track bridge over Quantico Creek in addition to the single-track CSX span.

In 2011, the fund gained a steady flow of sales tax money when it morphed into the Virginia Intercity Passenger Rail Operating Fund, leaving no doubt as to its purpose. It triggered route expansions to Lynchburg, then Norfolk, and later extension of the Lynchburg round trip to Roanoke.

From Amtrak’s inception, the state has benefitted from a hybrid mix of departures on its two routes south of Washington. Those include four long-distance round trips traveling beyond Petersburg, Va., also a stop for Norfolk trains: the Florida-bound Silver Star and Silver Meteor; the New York-Savannah, Ga., Palmetto; and the North Carolina-sponsored Carolinian to Charlotte. Service to Roanoke over Norfolk Southern pairs with the New Orleans-bound Crescent as far as Lynchburg, and the Cardinal to Charlottesville, that train’s often-sold out segment.

Availability of other Amtrak trains serving the Northeast Corridor, coupled with the state’s sponsorship of its own service, has meant patronage on its trains alone jumped more than 100% from 446,609 in fiscal 2009 to 924,657 ten years later.

Virginia’s Smith says environmental work and a 30% engineering design plan has been completed on the 123-mile rail corridor between Washington and Richmond. Final design will now need to commence.

“Funding segments in Northern Virginia to construct the third and fourth tracks has already been identified, with Virginia programming approximately $400 million for these projects,” he says.

Another project that awaits further engineering and funding is the plan to bring all trains serving Richmond to the downtown Main Street Station.

“While the Final DC2RVA Environmental Impact Statement envisions additional capacity south of and over the James River,” Smith says, “the recent deal with CSX is for [enhancing] existing infrastructure north of Main Street only.”

Nevertheless, that will pave the way for an additional Newport News-Washington train by 2026, yet another arrow in the state’s intercity passenger train quiver.

Wednesday: How the Virginia plan will affect North Carolina

9 thoughts on “Virginia rail investment should have statewide impact NEWSWIRE”