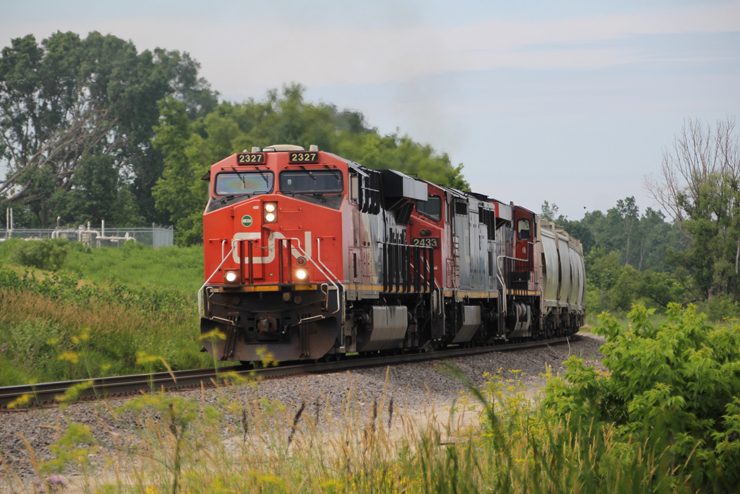 Canadian National reported strong first-quarter earnings Monday, but has made a series of cost-cutting moves in the wake of the coronavirus pandemic, including furloughs for 2,500 workers and storage of 500 locomotives.
TRAINS: David Lassen

MONTREAL — Canadian National reported stronger first-quarter earnings on Monday despite the impact of a month of blockades on key routes and the traffic downturn related to the onset of the COVID-19 pandemic.

But the railway, like most Class I systems, withdrew its financial guidance for the year, as well as the three-year targets it introduced at its investor day last year, due to uncertainty regarding the economic impact of the pandemic.

“We at CN have been diligent at providing a safe environment for all of our employees, and I am happy to report the railroad is safe and CN never slowed down,” CEO JJ Ruest told investors and analysts on the railway’s earnings call.

CN will manage through the deep downturn with an eye toward its long-term growth prospects, Ruest says. Over the next few years CN expects intermodal and bulk volume to grow, due in large part to a series of ongoing port expansion projects on Canada’s west and east coasts and new domestic and cross-border intermodal services.

“We’re very confident about the long-term future, but in the short term we’re not too sure what the economy has in store for us,” Ruest says.

CN’s traffic is down 15% in April due to the global recession related to the pandemic, led by a nearly 90% decline in automotive volume as North American assembly plants remain closed. Executives say traffic is likely to bottom out in May, but what a economic recovery looks like is anyone’s guess.

In response to the downturn, CN has stored 500 locomotives and 15% of its freight car fleet, Chief Operating Officer Rob Reilly says.

Train starts were reduced by more than 20%, Reilly says, with a matching reduction in train and engine service employees. Overall, CN has 2,500 people furloughed and its workforce is down 16% compared to a year ago.

CN has suspended its share buyback program but remains committed to boosting its dividend by 7% this year. CN scaled back its capital spending plan for the year by $1 million, to $2.9 billion, but will forge ahead with capacity projects leading to the ports of Vancouver and Prince Rupert, British Columbia. The new figure keeps track and infrastructure maintenance spending steady at $1.6 billion.

Quarterly volume was negatively affected by a month of illegal civil protests that blocked key CN routes at more than 30 locations, as well as a five-day closure of its main line to Vancouver due to washouts. CN’s traffic slumped 6% when measured by carloads and 1% when measured by revenue ton-miles, the preferred metric of the Canadian railways.

In the first quarter, CN set records for domestic potash shipments, as well as March records for Canadian grain and coal. Crude oil volume surged 45% in the quarter and frac sand volume was up 40%.

Although oil prices have plunged and Canadian Pacific said its crude volumes could fall to zero, CN expects some of its crude traffic to keep rolling. About a quarter of its crude volume is heavy undiluted crude that has moved in good times and bad, says James Cairns, CN’s senior vice president of rail centric supply chain.

In the second quarter, CN expects Canadian grain and coal volumes to continue to be strong. The rest of its carload traffic is expected to be hit by weaker demand due to the pandemic. The auto plant shutdowns, and likely low production after they reopen, is expected to result in lower volumes for aluminum, steel, and plastics.

Intermodal volume is expected to fall, as well, as consumers pull back on spending, says Keith Reardon, senior vice president of consumer product supply chain. CN does expect to see pockets of intermodal growth, including domestic refrigerated service and joint service with CSX Transportation linking the ports of Philadelphia and New York and New Jersey with Toronto and Montreal.