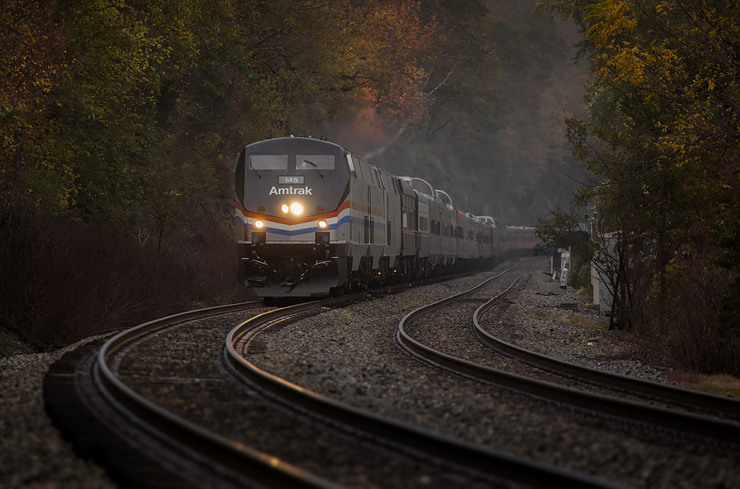 The Collis P. Huntington Railroad Historical Society’s 2017 New River Train rolls through Sandstone, W.Va., with 30 private cars in tow. A new Amtrak policy could mean the end of this and all other excursions using the passenger railroad’s equipment.
Chase Gunnoe
WASHINGTON — Special trains and certain private varnish moves will no longer be allowed on Amtrak routes according to a brief notice of a policy change sent to Amtrak employees and obtained by Trains News Wire Wednesday morning.

“There may be a few narrow exceptions to this policy in order to support specific strategic initiatives, for example trial service in support of growing new scheduled service. Otherwise, one-time trips and charters are immediately discontinued,” the notice adds.

It is not yet clear to what extent the passenger railroad will discontinue its move of privately owned passenger cars; however, some private car operators already report they are having move requests denied.

The Collis P. Huntington Railroad Historical Society in Huntington, W.Va., has been informed that their private car moves will no longer be allowed out of Huntington on Amtrak’s tri-weekly Cardinal, effective at the end of April.

“We are trying to better understand if Amtrak will allow the cars to be moved at beginning or end points,” Assistant General Manager Joe Rosenthal says.

For the Cardinal, that would mean the West Virginia non-profit railroad group would have to relocate its cars to Chicago or Washington. It is unclear if even those changes would allow their cars to operate on Amtrak trains.

And for the non-profit group’s flagship excursion, the New River Train, Rosenthal says that Amtrak’s policy would mean the discontinuation of the 51-year tradition.

“West Virginia will be losing a huge economic impact and it’ll be particularly devastating to the cities of Huntington and Hinton,” he says.

The annual excursion has operated the third and fourth weekends of October from Huntington to Hinton, W.Va., and return. It has used Amtrak locomotives and crews on CSX Transportation’s main line through West Virginia. In 2017, the excursion train operated with three locomotives and 30 privately owned passenger cars.

The excursions are a multi-million dollar tourism boost to rural West Virginia with nearly 5,000 riders annually. It is the largest mainline excursion train in the United States.

Similarly, there are dozens of other organizations and private operators whose railcars travel on the rear of Amtrak trains. As news circulated among the private railcar community Wednesday afternoon, there were more questions than answers.

Trains News Wire reached out to Amtrak for additional details on the policy, but had not heard back as of early Wednesday afternoon. News Wire has also contacted the Railroad Passenger Car Alliance and the American Association of Private Railroad Car Owners for comment.

This is a developing story. Follow Trains News Wire for additional information and reactions as they become available.