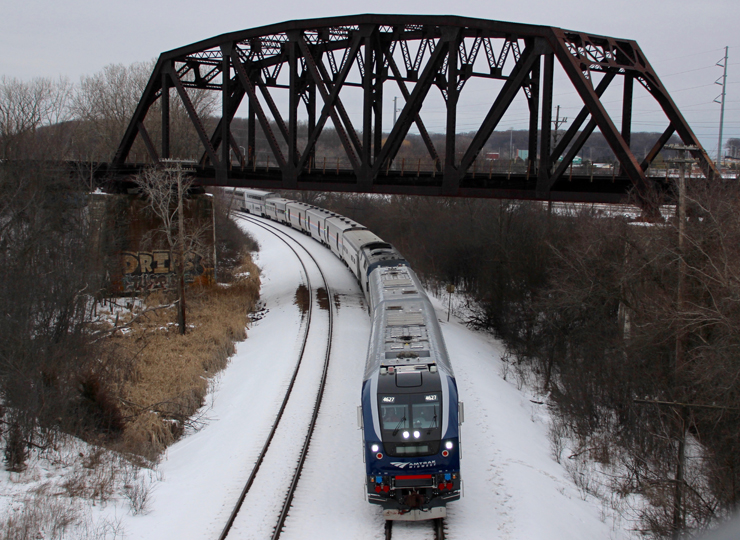 Charger locomotive No. 4627 leads an Amtrak test train through Wauwatosa, Wis., on Tuesday afternoon. Amtrak is testing the locomotives for use in long-distance service.
TRAINS: David Lassen

CHICAGO — People along Amtrak’s Empire Builder route are getting a preview of the future of long-distance passenger service this week as the railroad runs a test train powered by two Siemens Charger SC-44 locomotives.

On Tuesday, the test train led by two Chargers departed Chicago bound for Seattle. Along with the SC-44 locomotives, the consist includes a P42 and nine passenger cars to simulate the weight and length of one of Amtrak’s long-distance trains.

“The purpose of this trip is to gather data,” says Amtrak spokesman Marc Magliari, adding that officials from Amtrak and Siemens were on the train.

The train was expected to arrive in Seattle on Thursday morning. Additional tests are expected on the Coast Starlight and California Zephyr routes in the near future.

In December 2018, Amtrak announced that it was purchasing 75 Siemens Charger locomotives for long-distance services [see “Siemens to supply 75 new Tier 4 locomotives to Amtrak,” Trains News Wire, Dec. 21, 2018]. The locomotives will replace Amtrak’s aging fleet of GE-built P40 and P42 locomotives, some of which have been in service for more than 25 years. The new locomotives are expected to start arriving in the summer of 2021.