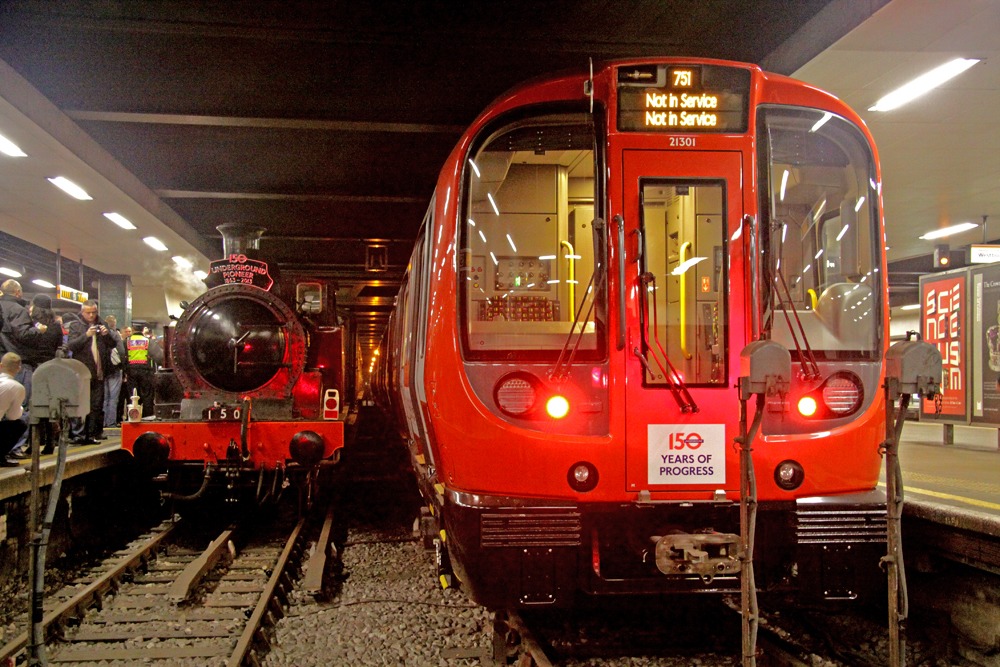 Steam on the Underground in 2013 – Metropolitan Railway No. 1 next to a brand new Underground train at Moorgate station.
Keith Fender
LONDON — Transit agency Transport for London has announced plans to commemorate 150 years of the city’s District Line subway route by running steam hauled trains on part of the system June 22 and 23.

The District Line today is a major east-west route connecting boroughs on either side of the city center via central London. The line serves famous landmarks such as Tower Bridge (Tower Hill station) and Big Ben (Westminster) along the way.

Formerly an independent company, the District Railway built cut-and-cover tunnels only a few yards below the city streets with some open air sections in brick-lined cuttings that remain today. They were built for steam operation but electrified from 1905 after Chicago streetcar magnate Charles Yerkes company Underground Electric Railways Company of London Limited took control of the District Railway and raised £1 million to fund the electrification. This private company ran the line along with several other Tube lines until taken over by the government in 1933 when the new London Transport renamed the route the District Line.

Last chance for steam in city center
The exact route for the special trains in June has yet to be announced but it will likely be the last time such steam trains are possible in central London — as a new positive train control system being installed will prevent anything but regular subway trains with the new PTC system from using the tracks.

London first brought back steam on its subway in 2013 to commemorate the opening of the Worlds’ first underground subway route in the city 150 years before — it is likely the same locomotive — 1898 built former Metropolitan Railway 0-4-4T No. 1 will be used this year along with genuine century-old former steam hauled Underground route cars on loan from several British heritage railways.