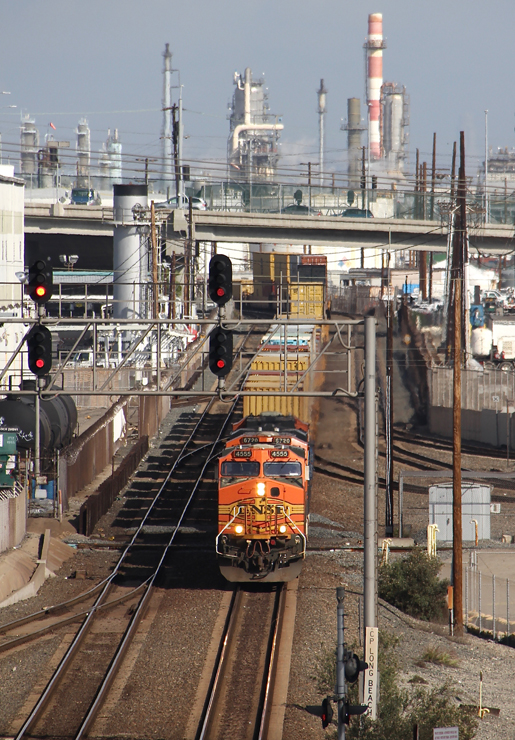 After traveling the Alameda Corridor, a BNSF Railway intermodal train approaches the Port of Los Angeles. RailWorks has been awarded a five-year contract to maintain the 65 miles of track in the corridor, as well as related infrastructure.
TRAINS: David Lassen

The five-year contract will cover more 65 miles of freight right-of-way owned by the authority, including 126 turnouts, 10 bridges, signals at 48 locations, seven grade crossings and 50 other communications assets. It also includes storm water pump stations in the corridor’s 10-mile trench, triple-track trench leading to the ports of Los Angeles and Long Beach, as well as other inftrastructure related to the trench.

The 20-mile long corridor, including the 10-mile trench, is used by approximately 36 BNSF Railway and Union Pacific trains per day to move containers to and from the ports. The Corridor, which opened in 2002, was built by the joint-powers authority and is governed by the cities and ports of Los Angeles and Long Beach, as well as the Metropolitan Transportation Authority.

“The maintenance work performed by RailWorks will enhance the track infrastructure, ensuring trains efficiently move through the area, which carry the ever increasing intermodal traffic into and out of the Southern California ports,” RailWorks President and CEO Kevin Riddett said in a press release. “RailWorks is excited to be involved with this vital piece of national infrastructure.”