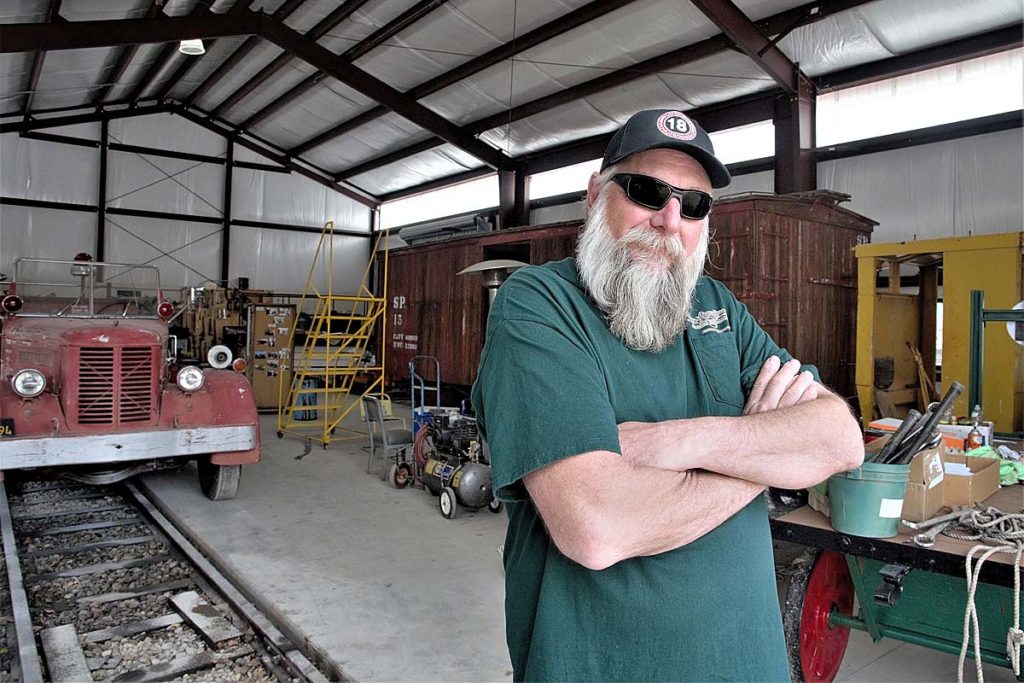 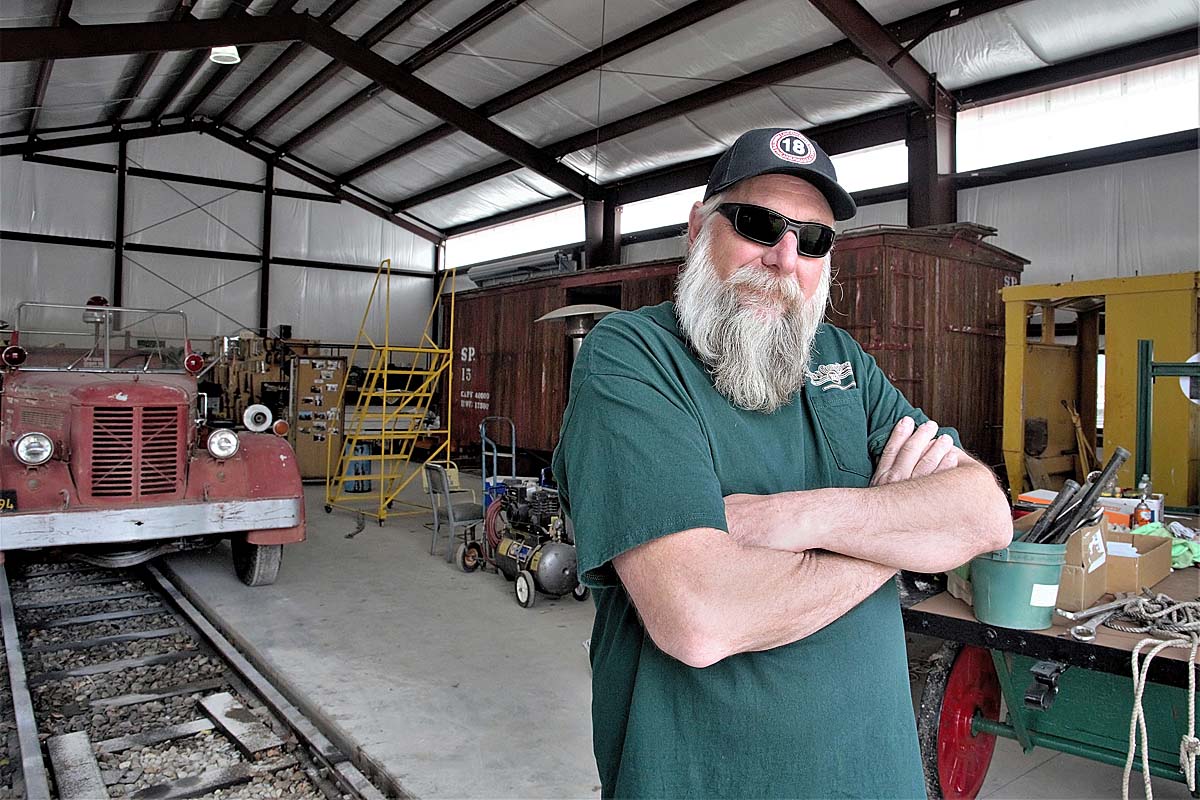 Dave Mull in the Carson & Colorado shop
David Lustig
DURANGO, Colo. – Southern Pacific narrow gauge 4-6-0 No. 18, normally a denizen of California’s Owens Valley, is having a ball right now. Temporarily working out of Durango on the Durango & Silverton Narrow Gauge Railroad, it’s burnishing the rails hauling passengers and photo freights, playing in the snow, and getting taken care to the same excellent standards the railroad does its own 2-8-2 Mikados.

But it will soon be time to bring the locomotive back to the Golden State and again become a “California girl.” But, says David Mull, the head of the Independence, Calif.-headquartered Carson & Colorado Railway, the nonprofit organization that brought No. 18 back among ranks of the living, its roaming days are far from over.

“It’s been a great experience seeing her run on the D&S, and the crews and shop forces have really taken care of her,” he says, adding that the ability for No. 18 to stretch its legs found a few problems that had to be corrected.

For example, Mull says when the locomotive left Independence, they knew the air compressor was not working up to capacity.

“It always seemed to be laboring,” he continues. “On a couple of runs out of Durango, it wouldn’t get past 125 pounds when it should have been 130. The shop forces there found an internal crack that was siphoning off pressure, so it just kept running and running. It had to be fixed.”

The nonprofit found the funds to buy a new compressor and get the old one fixed and held as a spare.

Mull says the group also felt that the locomotive was not steaming as well as it could, noticing that on uphill runs it was practically on its knees. Locating the petticoat inside the smokebox, members realized it was not set in the correct position and was blocking the flow of heat to the upper tubes the boiler. Once it was properly adjusted, No. 18 operated perfectly.

“We would have never noticed it in Independence,” he says. “It is now a ready-to-run loco anywhere.”

That includes a Christmas-time event in Independence, and a possible visit 60 miles up the road to the Laws Railroad Museum near Bishop in early 2020. Heading back to Colorado may also happen sometime in the future.

“Her best days are still ahead,” he says.
For more on the locomotive, go to carsoncolorado.com. 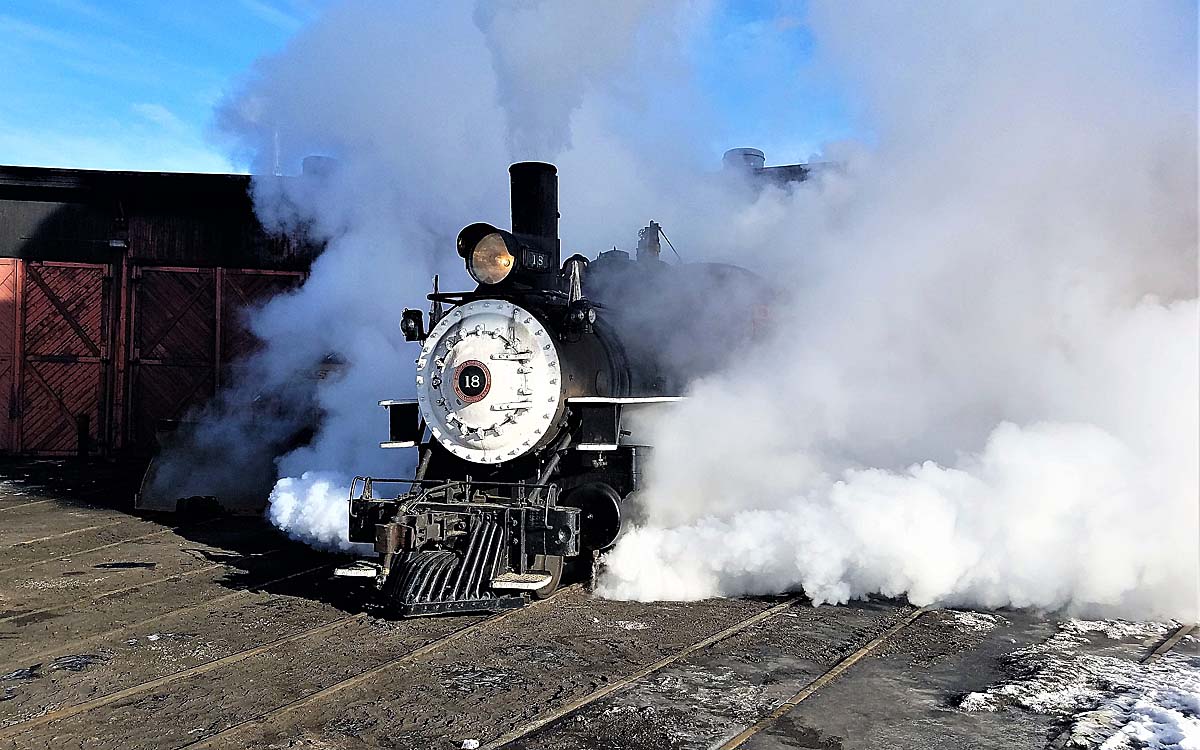 No. 18 plays in the snow in Durango.
Dave Mull