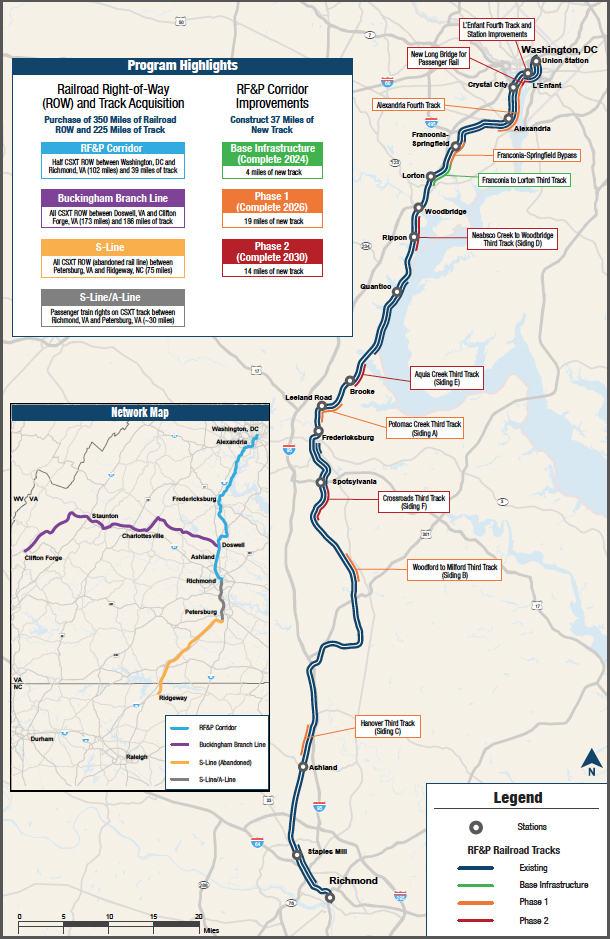 ALEXANDRIA, Va. — The $3.7 billion agreement between the Commonwealth of Virginia and CSX Transportation will dramatically expand rail capacity for Virginia Railway Express (VRE) and Amtrak over a 10-year period.

When completed in 2030, improvements will include a second two-track bridge over the Potomac River, a fourth mainline track between Crystal City and Alexandria, a third track from Franconia to Lorton, six new passing sidings, and a Franconia-to-Springfield bypass for passenger trains.

The first new service to result, likely in 2021, would be an additional Amtrak round trip to Norfolk and one new VRE round trip on the Fredericksburg line. Later, four more Fredericksburg runs are planned, including new weekend and late-night service, along with additional round trips on the Manassas Line. Those won’t begin until at least 2026.

“We’ve worked very well with CSX in the past on adding service incrementally,” says Jennifer Mitchell, director of the Virginia Department of Rail and Public Transportation (DRPT). “Then this opportunity came up.”

Virginia will pay CSX $525 million over three years for property and track. The biggest part of this deal: acquiring 100 miles of CSX right-of-way between Washington and Richmond. Essentially splitting the corridor down the middle, the Commonwealth will own all track within its right-of-way. CSX will continue to own and operate its separate, but adjoining, right-of-way.

“The eventual impact, once the phases are complete, will be a positive one as it will separate freight operations from passenger operations allowing for better fluidity through this key corridor,” CSX spokeswoman Cindy Schild tells Trains News Wire.

Freight traffic is projected to grow 14% by 2040 according to the environmental statement issued by the Federal Railroad Administration in September 2019.

The Commonwealth also gets the Buckingham Branch from Doswell to Clifton Forge, 30 miles of passenger rights from Richmond to Petersburg and 75 miles of abandoned track south of Petersburg to Ridgeway, North Carolina. It plans 37 miles of new track, including the new bridge.

The deal came at the end of a year which saw on-time performance for VRE Fredericksburg Line trains vary from 53% in July to 90% in the best months. Katie Cristol, chair of the operations board for VRE and an elected member of the Arlington County board of supervisors, says freight train congestion, weather-related delays, and “hiccups” with Positive Train Control all contributed.

The worst bottleneck is Long Bridge, a two-track steel truss bridge built in 1904 across the Potomac. Owned and operated by CSX, it currently carries 34 daily VRE trains (including deadhead moves), 24 Amtrak trains, and approximately 18 CSX trains. During peak periods, it’s at 98% capacity.

Even slight delays for trains in tightly scheduled slots cascade quickly. The FRA says these delays “are a daily event.” The second span and a fourth track from L’Enfant Station to Alexandria would allow VRE, Amtrak , and CSX to increase operations with fewer conflicts and delays.

“By 2030, once this is all built out, we expect that we’ll be able to have more reliable service in addition to the additional frequencies,” says Mitchell. The new bridge alone will cost $1.9 billion.

Longer trains and more service will likely require additional rolling stock. Mitchell says that DRPT is working with VRE to determine needs for more coaches, cab cars, or locomotives. That, in turn, will require more capacity at VRE’s yard in Fredericksburg and in Washington.

The Virginia-CSX agreement is being hailed as “transformational” and “a game-changer.”

Jeannette Chapman, director of the Stephen S. Fuller Institute at George Mason University, says, “The Washington region has two paths of growth. One is to start looking like a more traditional Northeastern metro that’s denser and has more rail commuting, or we could continue to be a more car-centric Southern metro.”

The DRPT commissioned the Institute to study the deal’s economic benefits. It found construction of the second Long Bridge and related improvements would support 14,000 jobs.

Longer term, by enabling better, faster, more reliable commutes, the Washington region will benefit greatly. A large part of that is due to who rides the trains. “Rail commuters tend to be highly educated and have fairly high average wages,” explains Chapman. By 2040, they could add $12.2 billion to the regional economy each year, almost twice their current contribution.

By 2040, VRE will have the carrying capacity of two lanes of interstate highway traffic at rush hour. Both Cristol and Chapman point to quality-of-life improvements from expanded service hours, the ability to avoid traffic congestion, and greater choice of work and home locations.

Longer-term planning includes an idea, floated by a VRE-commissioned study, for run-through service of Maryland’s MARC commuter trains to Virginia. VRE and DRPT are talking with Amtrak as it plans for expansion of Washington Union Station.

Most funding is in place for the $3.7 billion project, split roughly equally among federal, state, and local sources. Amtrak is kicking in $944 million. DRPT has dedicated state rail funds available along with discretionary transportation monies, and is working on local funding with locations with Northern Virginia jurisdictions. “We’ll be talking to DC and Maryland as well about funding contributions,” says Mitchell.

VRE has $100 million available to contribute from its Commuter Rail Operating and Capital fund, Cristol says.

The deal isn’t quite done. The DRPT and CSX must hash out definitive agreements, but Mitchell expects those to be done by the end of this year. Some reports have stated additional trains could start running in 2020, but Mitchell tells News Wire, “I think it’s more likely that it will be 2021.”