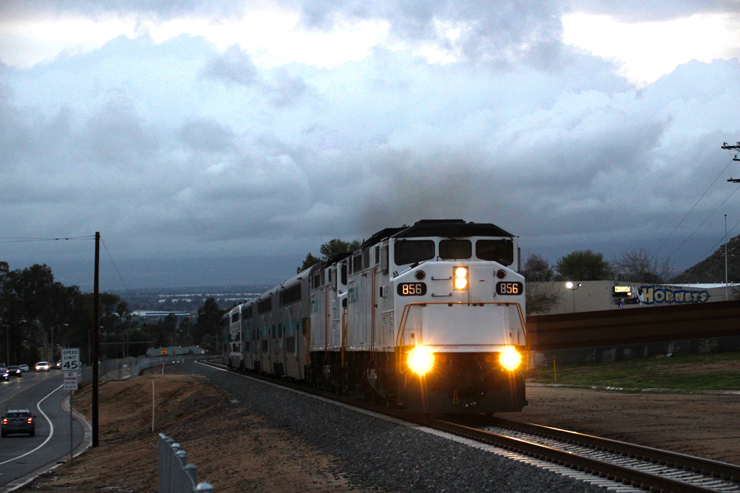 Here’s the conclusion of our Trains Interview with Metrolink CEO Stephanie Wiggins, conducted in February at Metrolink headquarters in Los Angeles. You can find part one of the online portion of the interview here, and read more in the June 2019 issue of Trains. As with the print interview, questions and answers have been edited for length and clarity.

Q: What do you think Metrolink’s strengths are at this moment?

A: Well, safety for sure. [Positive train control], we’re a resource for both freight railroads, BN and UP. Our partners, LOSSAN with the Pacific Surfliner, and NCTD Coaster, and dealing with the interoperability for PTC compliance by the deadline. Safety I think is our No. 1 priority and differentiator and what we do well, and what we’re known for. It’s not just safety for safety’s sake, but it’s also going above and beyond what’s minimally required. We delivered on the PTC compliance well before the deadline. … I think what I’ve seen from this agency is that, particularly in regulatory areas, we go above and beyond what’s minimally required. This agency really cares. The board really cares. That makes me hopeful and proud to work here, because it’s not an agency that’s just invested in doing the minimal, it’s an agency that’s invested in doing what’s right.

Q: As CEO, what is your responsibility for maintaining or strengthening the safety culture?

A: Fundamentally, I believe the CEO’s role in maintaining the safety culture, and what I will be doing, is ensuring that we don’t become complacent. It’s really easy, especially when you’ve had some challenging times, to be very vigilant immediately after an event, and then over time take it for granted and become complacent. … My focus is to reinforce that culture, make sure we don’t get complacent. In partnership with my new board chair, Bryan Humphrey, he even made an announcement at last month’s board meeting I think it was, about safety briefings, and being more focused on the safety briefings, and consistent with the safety briefings. It’s about ensuring compliance, having unplanned visits. It’s about realigning safety and security.

It will be a direct report to the CEO, as opposed to where it is now in the organization. But I think it’s a tone from the top, that just doesn’t take it for granted. We have made great strides. We wanna make sure that safety is not just the safety and security department’s responsibility, but it’s everyone’s responsibility, and everyone’s accountable for it. I think that’s really important, ’cause too often, it too can become siloed, it can be taken for granted, and we wanna make sure that doesn’t happen.

Q: I was just at a conference where several people from Class I railroads said, “Well [PTC is] working 80 to 85 percent of the time.” Are you as reliable as you want to be at this point? Are the bugs still being worked out, and if there are bugs, do the riders understand this is a new technology? Basically, it’s a mandated technology for which the technology didn’t exist at the time it was mandated.

A: We feel very good about where it is. When you are on the leading edge of technology, it truly can be the bleeding edge. You know, we learned with the technology as it developed, and we did have some impacts on service. We had to quickly adapt and be clear in our communication to our riders about the disruptions that they were experiencing and why. It was a challenge.

However, now that we’re fully compliant … we are very happy with the system. Our PTC system is attributed to delaying less than five of our total train moves every weekday. We have 173 regularly scheduled trains every day. We dispatch a total of 330 and 350 train moves. Out of 330, 350, five maybe on average are delayed. We’re very happy with that.

A: We have some versions of public/private partnerships. We have, during prom season, we have the school sponsor special train service so that high school students can go to their prom. We’ve been doing that. We have partnered with the Speedway in the past [The California Speedway in Fontana hosts NASCAR and Indy Car events], only providing special train service, but the Speedway provides free shuttle service from our station. They also do joint ticketing, which is huge for us.

But what I want to do in my role as CEO is open the agency up to even more private-sector opportunities. I want to develop an unsolicited proposal process, so we don’t have to wait for all the ideas to come out of Metrolink. The private sector can bring us their ideas. …

Q: LA Metro [where Wiggins was deputy CEO before coming to Metrolink] has that, right? They’re talking about the tram to Dodger Stadium.

A: That’s right, the aerial tram, exactly. Unsolicited proposal. [Metro received the proposal for an aerial tram connecting LA Union Station and Dodger Stadium in April 2018, and by December 2018 had signed a letter of intent with a company to build the privately-funded project, which aims to open in 2022.] … I’m really excited about that innovation, and bringing that here.

The pace of technology, we can’t possibly, on our own, keep up with all the needs and demands. Partnering with the private sector, creating an opportunity for them to share their ideas in a timely fashion so that we can act on them, it’s going to be better for everyone.

We want to play in that space.

Q:  Finally, I know it’s early still, but what has surprised you most about Metrolink?

A: You know, I think what has initially surprised me most … is the scale of Metrolink’s reach. People think it’s in an agency of 275 people, and even though it operates in six counties, I don’t think people really get a sense of the scale and the connection that we have, given the huge spine that we have, right? … I don’t know that I completely appreciated that in my previous roles before coming here, because while I’m regional in my makeup and nature, I was still seeing it principally from the lens of the member that I worked for.

The opportunities here are enormous, the reach is enormous. If we address the customer experience, the reliability, we can be even more transformational in really being a tool to help people get out of their cars