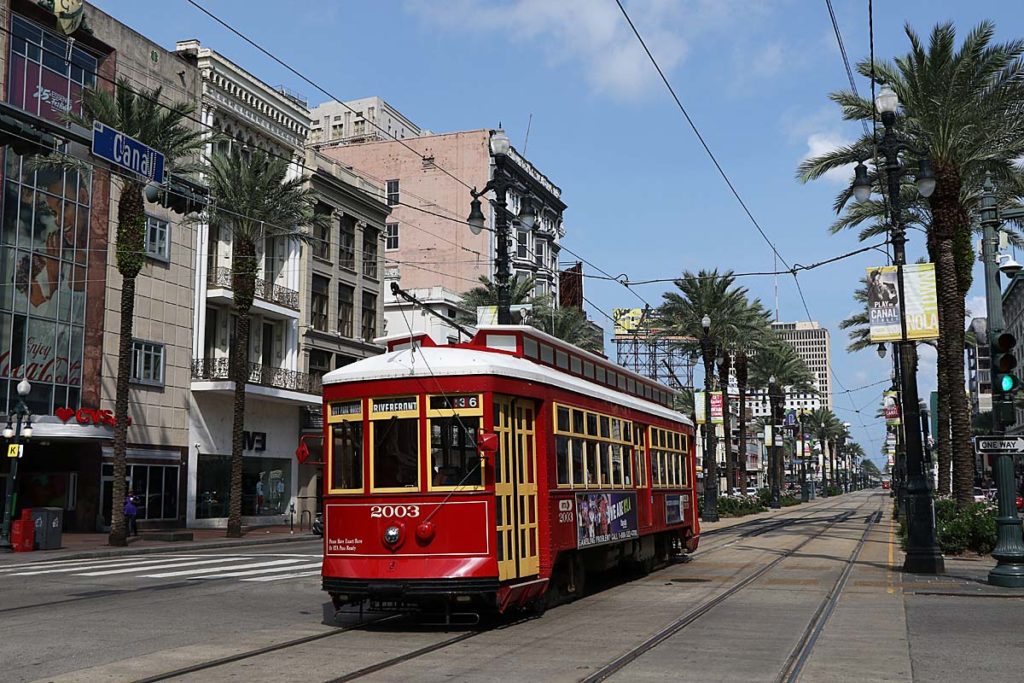 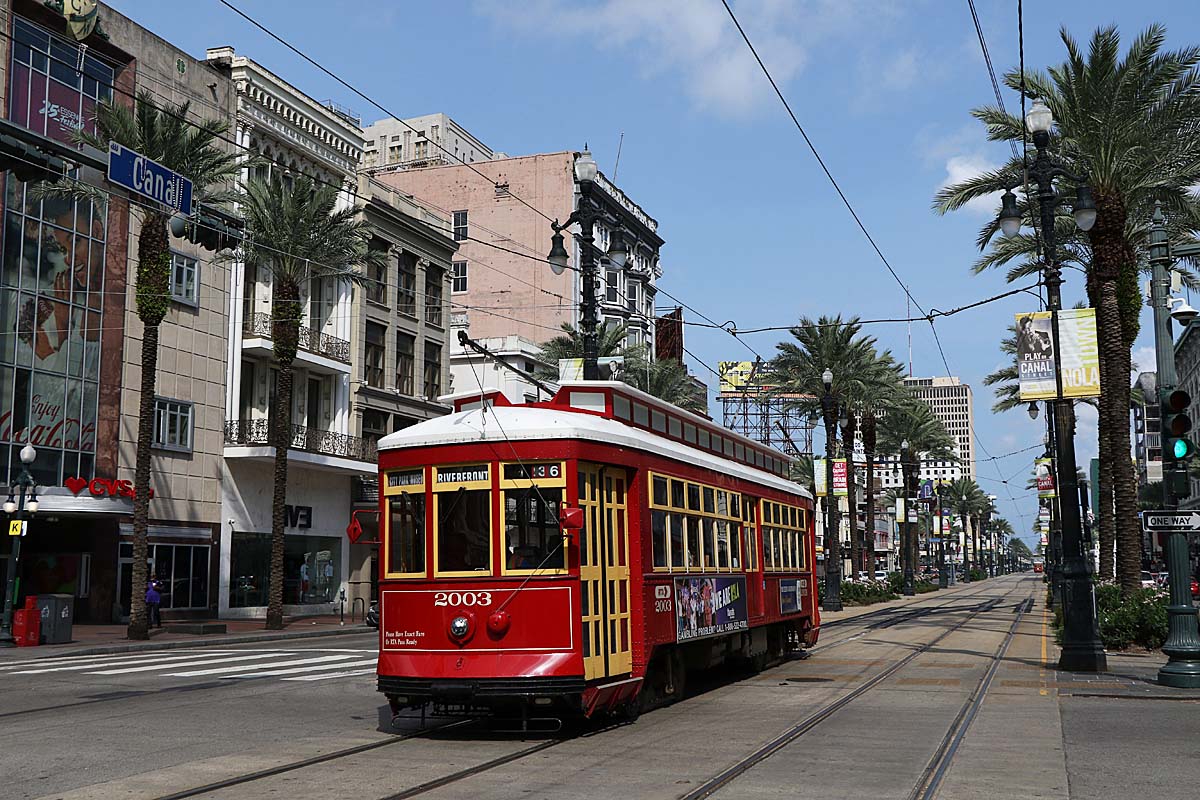 RTA’s Canal Street streetcar route, restored to service 40 years after it was shut down in 1964, is a busy line, carrying tourists and residents through New Orleans’ central business district. The red replica streetcars, seen Aug. 12, 2019, were constructed by RTA.
Scott A. Hartley
NEW ORLEANS – The historic St. Charles Line streetcar route is receiving upgrades at both ends to bring it back to full operating capacity in time for the 2019 holiday season and Mardi Gras 2020.
Long known for its fleet of 95-year old green streetcars and its 13-mile route in and along city streets, the St. Charles Line is the only New Orleans streetcar route that was not converted to buses. Opened as a horse-drawn operation in 1835, the St. Charles Line was electrified late in the 19th century.
Through late summer 2019, St. Charles Avenue passengers rode bus replacements between the west end of the line at South Claiborne Avenue and Napoleon Avenue and the eastern end between Lee Circle and Canal Street central business district. This left work left tourists and local resident who wished to ride the historic streetcar route with a comparatively short ride in the median of St. Charles Avenue through the city’s Garden District.
Contractors are replacing 13 overhead catenary poles that have suffered corrosion damage and one that was bent in an accident. New Orleans Regional Transit Authority Rail Maintenance Department personnel will perform additional preventative repairs along the corridor through the end of 2019. This segment, which takes riders past beautiful Southern homes, Audubon Park, and Loyola University, is expected to be reopened by October, according to an RTA spokesperson.
Between Lee Circle and Canal Street, the St. Charles Line splits into two routes to lead in and out of the central business district, as streetcars run on Carondelet Street and St. Charles Avenue, both busy one-way streets. Contractors are performing major work on this segment, replacing deteriorating asphalt inside and outside the rails with new concrete pavement, for improved safety, according to RTA. Current funding allows for completion of approximately one-half of this project. This first phase should be completed by the end of 2019, with streetcar service restored over the entire St. Charles Line by January.
The RTA spokesperson told Trains News Wire that the agency chose to start all of this work this summer in order to finish before this year’s holiday season and the 2020 Mardi Gras celebrations, which will occur in January and February. Both periods see large numbers of additional visitors to the Crescent City.
The St. Charles Avenue Line relies on a fleet of 35 original New Orleans streetcars, built by the Perley A. Thomas Car Works of High Point, N.C. during the 1920s. Currently, just 6 are needed for the shortened route. Under normal operations, 12-14 cars cover the normal round-the-clock operations, but additional cars can be added during busy periods.

Even as the St. Charles line undergoes repairs, visitors to New Orleans are able to ride other portions of the Regional Transit Authority’s 22-mile, 5 foot-2-1/2 inch gauge streetcar system:

All operate with red home-built “replica” streetcars, which unlike the 1920s Perley Thomas cars, have air-conditioned interiors, a welcome feature in a New Orleans’ hot and humid weather. 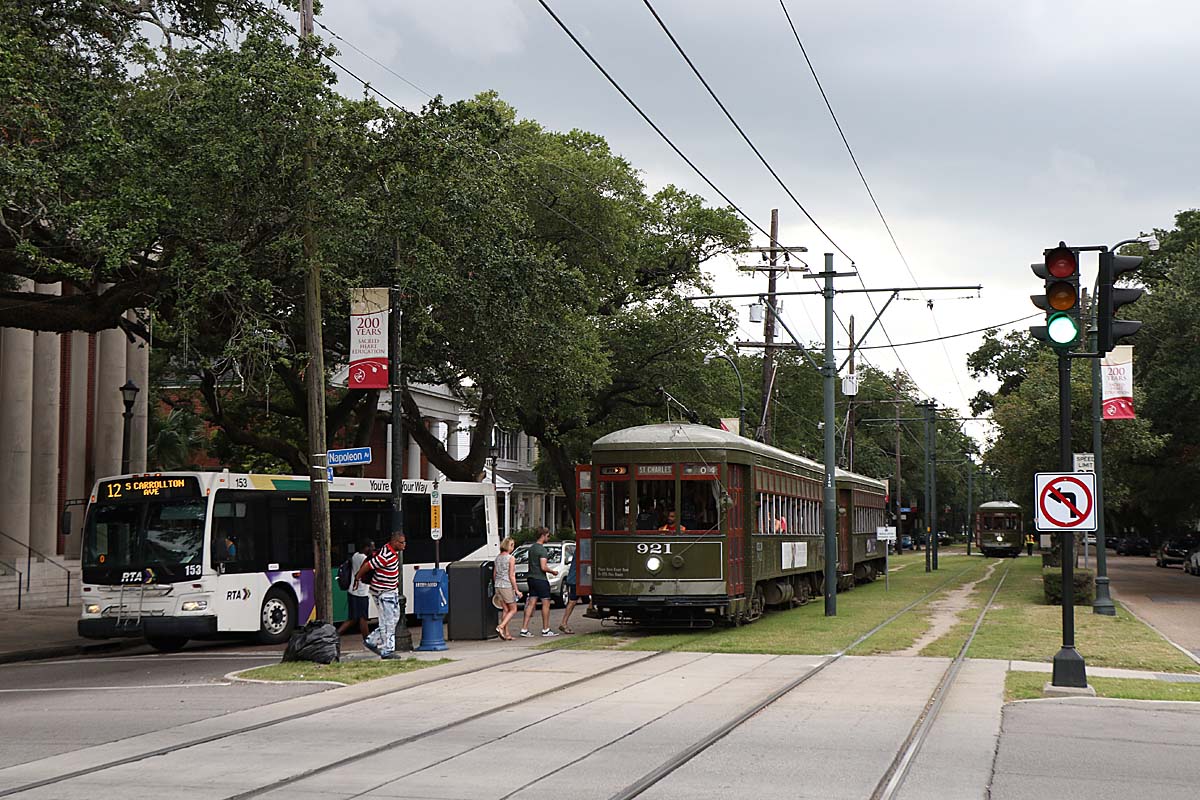