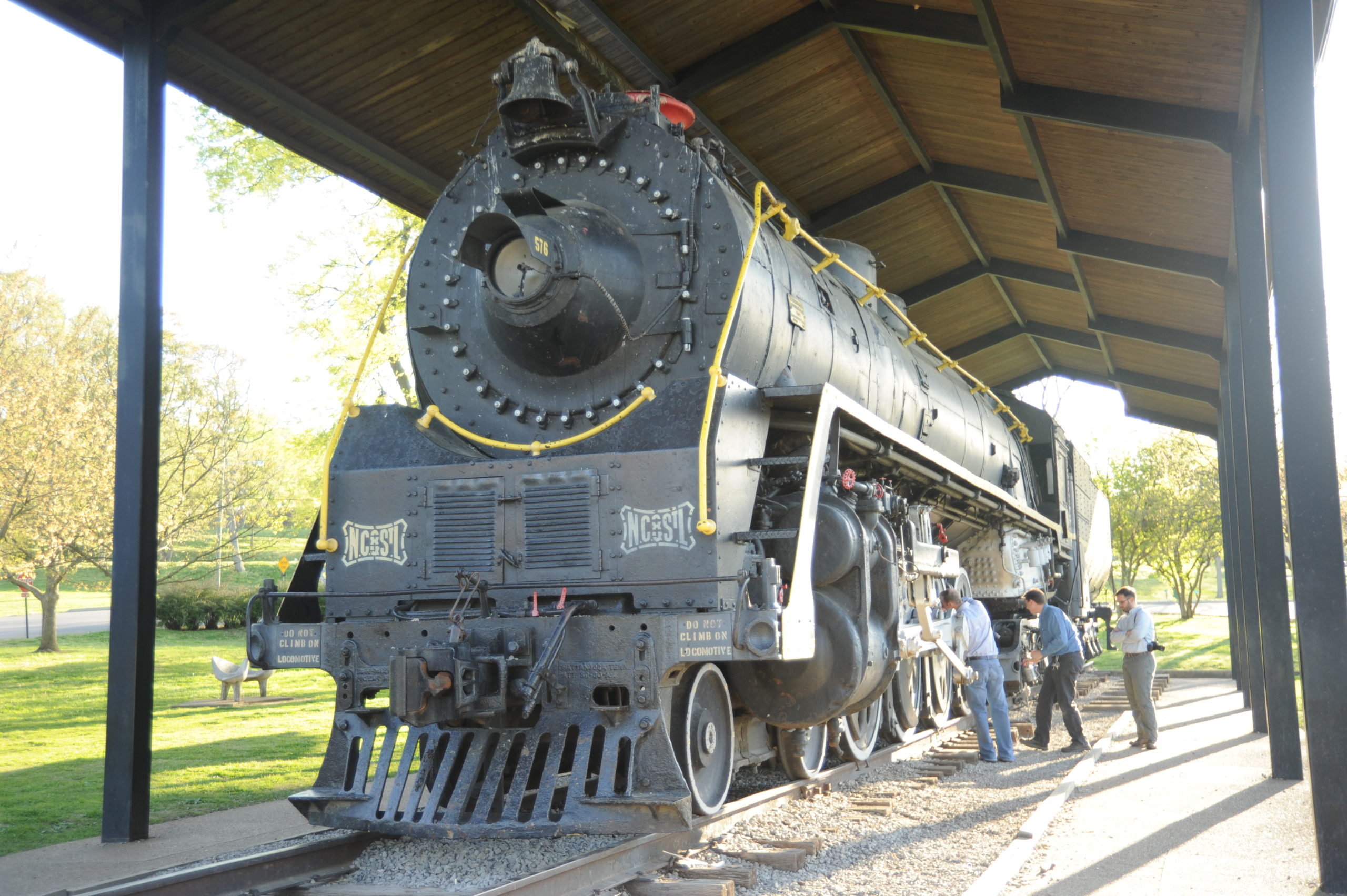 Nashville, Chattanooga & St. Louis 4-8-4 No. 576
Trains: Jim Wrinn
NASHVILLE, Tenn. — One of the rarest members of “the greatest generation” of modern American steam has languished in a Nashville park for more than six decades. Multiple efforts to bring it back to life have come and gone.

Now, though, steam buffs hope the stars are aligning for Nashville, Chattanooga & St. Louis Railway No. 576.

The big J3 engine, the sole survivor of a class of 20 built during the desperate days of World War II, is a 1942 product of the American Locomotive Company. The last time someone proposed removing the 4-8-4 from Centennial Park, in 2001, the parks board declined the offer.

Today, though, “it almost seems as if the timing is right, with all the things coming together,” says Shane Meador, a Nashville native and president and chairman of the recently formed Nashville Steam Preservation Society.

Museum President Terry Bebout, who was involved in the failed 2001 effort and is now preservation society vice president, thinks it really could happen this time.

“This is definitely a much better team of people with the professional skills to raise money and do the restoration,” Bebout says. “We didn’t have that the last time we tried to make this happen. This team effort is what’s going to be the success of this project.”

What’s changed in the last 15 years? In 2001, Meador says, “the Music City Star (commuter service) hadn’t happened yet, so the Nashville & Eastern was not capable of supporting the operations of a large steam locomotive.”

Also, the parks board today has a deadline to move 576 somewhere so it can start a major renovation of Centennial Park. Nashville’s historic riverfront has become both a popular tourist draw and home to Riverfront Station, where excursion trains would depart.

Most important, Meador says, “We have the people with the technical skills to make this happen, people who have been involved with over 30 successful steam locomotive restoration projects around the country.” 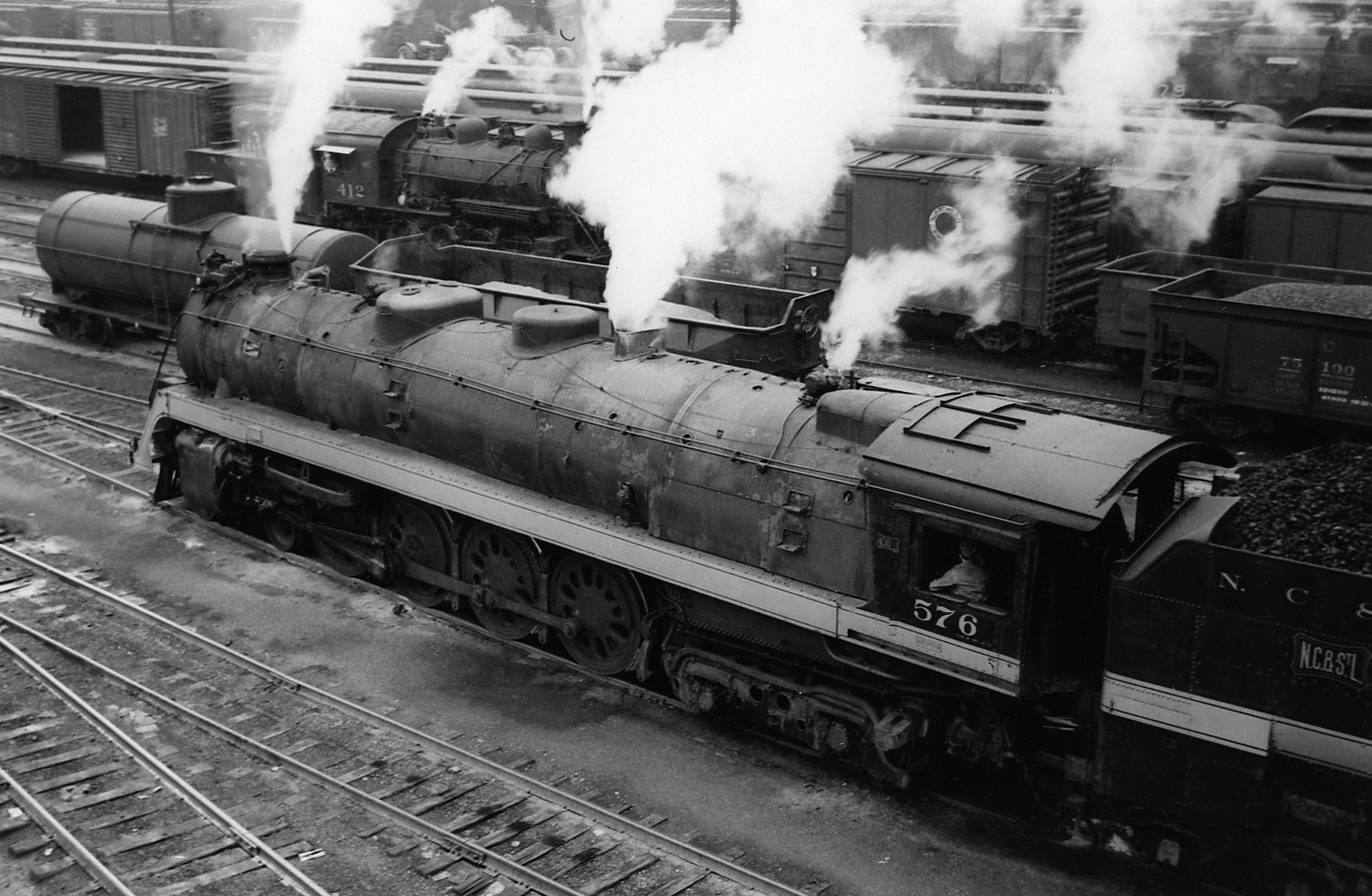 Nashville, Chattanooga & St. Louis 4-8-4 “Dixie” No. 576 shown in steam in the 1940s or early 1950s. A new team is set to work with local leaders to restore the World War II-era locomotive to operating condition.
Trains archives
Meador led the Southern Nos. 630 and 4501 programs for Norfolk Southern’s 21st Century Steam at the Tennessee Valley Railroad Museum in Chattanooga. He’s assembled a team that also includes NC&StL Preservation Society Secretary-Treasurer David Ellenburg as soceity treasurer, and Trains Editor Jim Wrinn and steam locomotive expert Gary Bensman on the board of directors.

The preservation society makes its pitch May 3 to the Metropolitan Board of Parks and Recreation. So far, the reception has been positive.

“The opportunity to ride a steam train out of Riverfront Park could be a much richer experience than the current static observation available in Centennial Park and is worthy of consideration,” Parks Directory Tommy Lynch says in a prepared statement issued ahead of the board meeting.

If the parks board goes along, the proposal will go to the Metropolitan Council. If the council approves, 576 could be moved this autumn to the museum. The engine would undergo a four-to-five-year rebuild, with the first trips under steam in the fall of 2020 or spring of 2021.

The preservation society will seek to raise $3 million for the J3’s refurbishment and an additional $2 million to build a visitors center. So far, the group has gotten $200,000 in pledges; donations can be made online.

“We’re not going to touch this project unless we have at least $500,000 in initial capital, which will basically pay for the move to [the museum] … and maintain $100,000 escrow so that in the worst-case scenario we can put the locomotive back together in better condition than when we found it,” Meador says.

The J3 class – not a “Northern” but a “Dixie” to the NC&StL — had its immediate predecessor in the J2, a 1930 design by NC Superintendent of Machinery Clarence M. Darden. A dual-purpose engine for freight and passenger service, the Alco-built J2 had 25-by-30-inch cylinders and 70-inch drivers, weighed 381,000 pounds and exerted 57,000 pounds tractive effort at 250 pounds steam pressure.

It was smaller than a typical 4-8-4 because of the NC’s tight clearances, lightweight bridges and 90-foot turntables. Its total wheelbase of 82 feet, 7 inches compared with 95 feet 4 inches for a Norfolk & Western “J” class like 611.

Yet Darden crammed a lot of innovation into a small package. 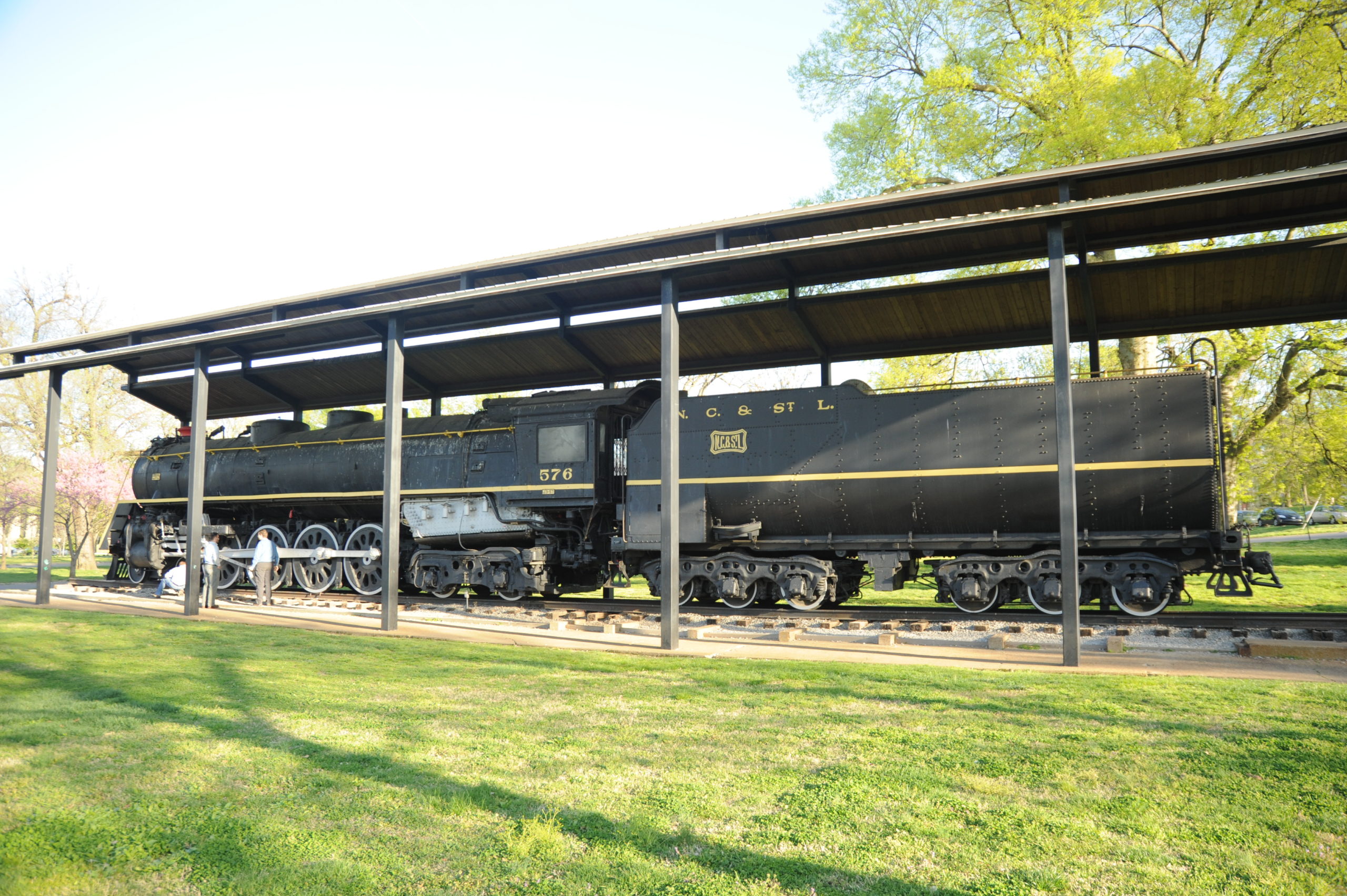 NC& St.L. No. 576 as it now appears, underneath a shed in a Nashville, Tenn., park.
Trains: Jim Wrinn
Richard E. Prince, in his book “NC&StL: History and Steam Locomotives,” says the J2 was noteworthy for its one-piece steel bed frame cast integral with the cylinders, and its free-lateral “floating” driving boxes on the main and lead driving axles. Road crews called the engines “Gliders” for the way they seemed to glide in and out of curves.

Darden and the NC went back to Schenectady in 1942 for an updated, semi-streamlined version of the J2. The new J3 incorporated the innovations of the prior class and added Timken roller bearings on all axles of the locomotive and tender, Boxpok-type drivers and six-axle conventional tenders.

“What’s also very unique and interesting is Mr. Darden built the locomotive so the appliances and piping were not attached directly to the boiler,” Meador said. “All the pipes are connected to brackets off the frame, including the power reverse valve gear. Darden said a boiler was made to generate steam, not to hang everything on it including the kitchen sink.”

Cylinder size, driver size, tractive effort and boiler pressure were identical to the J2, but the war engine was heavier — 400,500 pounds — and longer, with a total wheelbase of 86 feet 3 5/8 inches. Though it could still fit onto a 90-foot turntable, its overall length of slightly less than 100 feet made that dicey. The NC replaced its turntables with 110-footers in Nashville, Chattanooga and Atlanta, the new engine’s initial home territory.

The J3 also had a conical nose and a broad side skirt that NC’s Nashville Shops painted yellow. Hence the nickname, “Yellow Jacket.” Ten J3s including 576 were delivered in 1942. Ten more followed in 1943 without skirts; they got thin yellow paint lines and were called “Stripes.”

According to the October 1953 issue of the NC&StL Bulletin employee magazine, 576 could handle a 15-car passenger train or 50-car freight train in the mountains. Her 7-by-11-foot firebox required 1 ½ tons of coal to build a fire. Going all-out, she consumed 4 tons of coal and 7,000 gallons of water an hour.

After the war, the NC was among the first Southern roads to fully dieselize; the end of steam came in January 1953. All the J3s, numbered 570 through 589, were retired in 1951-52, and all were scrapped — except for one. No. 576, saved for the enjoyment of future generations of children, has been in Centennial Park since Sept. 30, 1953.