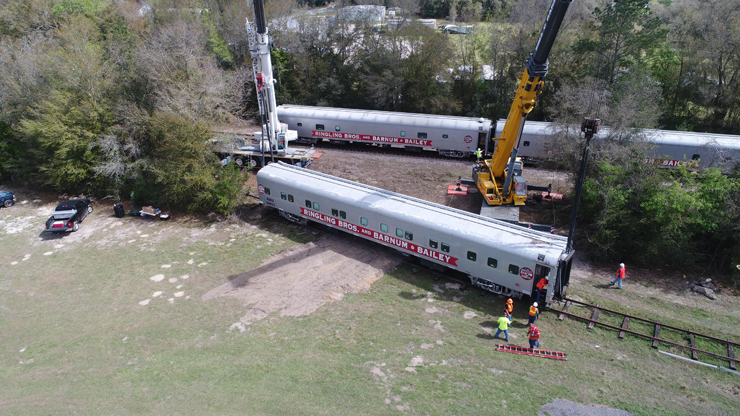 A crane and crews work to lift former Ringling Bros. Barnum & Bailey Circus cars from a nearby shortline railroad siding to panel track laid at the Kirby Family Farm in Williston, Fla., on Saturday, Feb. 24. The circus cars are destined for re-use as dormitories for at-risk and special needs youth.
Submitted photo 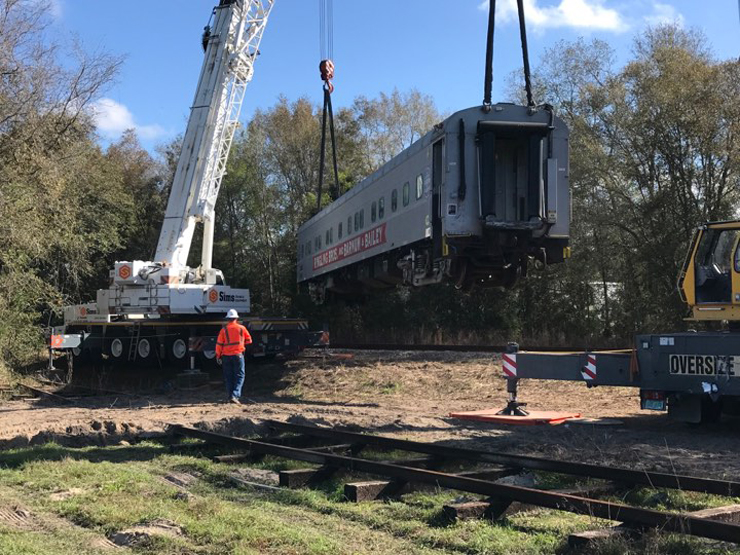 A crane lifts a former Ringling Bros. circus train car onto panel track at the Kirby Family Farm in Florida.
Submitted photo
WILLISTON, Fla. — Now that 16 passenger cars and four flat cars that once were part of the famed Ringling Bros. and Barnum & Bailey Circus have a new home in north-central Florida, a Florida family plans on turning them into dormitories for at-risk and special needs youth.

On Saturday, Feb. 24, curious railfans gathered at the invitation of the Kirby Family of the Kirby Family Farm in Williston to watch as a crew with a crane moved circus cars from a Florida Northern Railroad siding to panel track at the farm. Farm owner Daryl Kirby told Trains News Wire before the event that he wanted as many people who want to, to see the move.

GP7u No. 55 of sister Pinsly railroad Florida Central led the train and helped crews position cars so they could be lifted onto the nearby panel track. Kirby said re-using the circus cars as dormitories would be a novel experience for the children who will someday stay in them. Kirby decline to say how the farm acquired the cars, but thanks Circus-owner Feld Entertainment, CSX Transportation, and U.S. Sugar, among others, for their cooperation and support.

The Ringling Bros. and Barnum & Bailey Circus operated continuously from 1871 to 2017. The circus moved by train during most of its existence including to its final performance May 21, 2017.

More information on the family farm is available online.