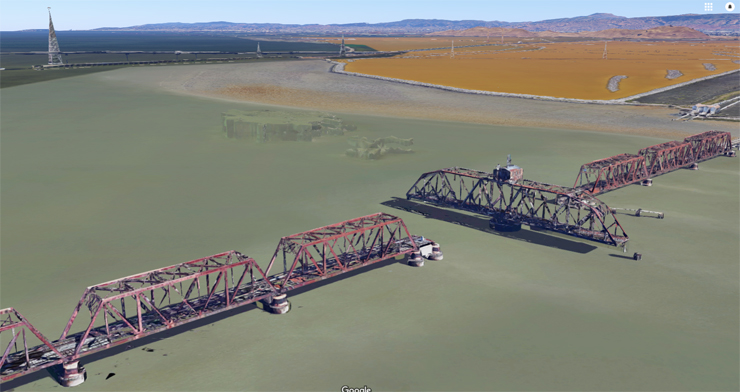 A Google Maps 3D view shows a portion of California’s Dumbarton Rail Bridge, idle since 1982. Facebook is reconsidering its part in funding studies to create a commuter rail service that would use the bridge.
Google Maps

Facebook may pull back from funding transit study
Facebook is reconsidering its commitment to fund a study on the revival of the Dumbarton Rail Corridor, which would make use of a long-dormant former Southern Pacific bridge across southern San Francisco Bay. The Palo Alto Daily Post quotes Juan Salazar, the social media giant’s  director of local policy and community engagement, as saying the company is “reassessing this long-term commitment” to the project in light of COVID-19, as the company is focusing on “addressing the immediate needs of people in the community struggling with the economic impacts of the pandemic.” Facebook, local transit agency SamTrans, and investment firm Plenary Group combined in 2018 to start an environmental study of the project, which would bring rail service to a route adjacent to Facebook’s Menlo Park headquarters [see “Facebook could help revive former San Francisco Bay rail bridge,” Trains News Wire, June 15, 2018]. An additional phase of the study is needed before the project can be eligible for public funding.

Local effort to save bridge loses in court, could be done
A seven-year legal battle to save a wooden Union Pacific trestle in the Willow Glen neighborhood of San Jose, Calif., may be over after a state appeals court refused to overturn a lower-court decision allowing the city to tear down the 98-year-old structure and replace it with a new bridge for a city trail. The San Jose Mercury news reports the bridge, built in 1921, was part of a UP right of way bought by the city in 2011 to extend the Three Creek Rail and connect to the Los Gatos Creek Trail. When the city initially planned to tear the wooden bridge down and replace it with a steel bridge, the Willow Glen Trestle Conservancy and Friends of Willow Glen Trestle filed suit. After losing in a first round of litigation, the current legal effort revolved around the fact the trestle has been listed on the state Register of Historical Resources, which the group said should require a new environmental study before it can be replaced. An attorney for the city expressed hope that the latest decision means work can advance on the new bridge, while a lawyer for the conservancy indicated she plans to seek a new hearing.

Bill would provide $250 million annually for grade crossing improvements
A bill introduced by U.S. Sen. Edward Markey (D-Mass.) would commit the federal government to funding $250 million annually for grade crossing improvement projects. The “Warren Cowles Grade Crossing Safety Act,” named for a Longmeadow, Mass., worker killed in a 2017 grade-crossing accident, would add those funds to the Federal Railroad Administration’s existing Consolidated Rail Infrastructure and Safety Improvements capital grants program. Markey, in his first full term in the Senate after being elected in a 2013 special election for the final 17 months of a vacated seat, is a member of the Senate Commerce, Science, and Transportation committee.