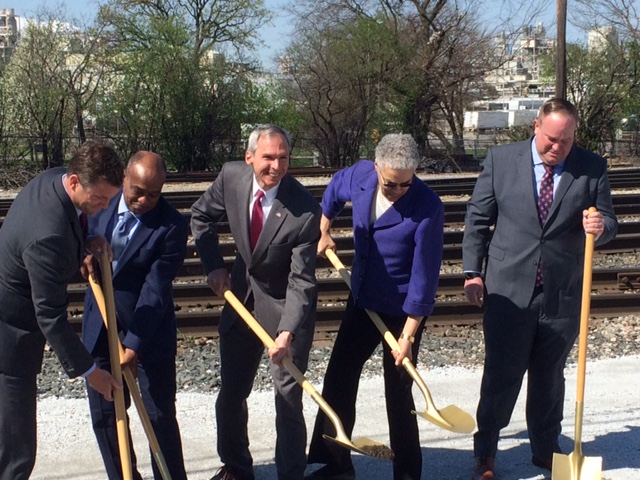 At a ceremonial groundbreaking for the Argo Connections project are (from left) Ian Jeffries, president and CEO of the Association of American Railroads; Acting Illinois Department of Transportation Secretary Omer Osman; U.S. Rep. Dan Lipinski, D-Ill.; Cook County Board President Toni Preckwinkle; and CSX Transportation General Manager – Midwest William Blanchetti.
Richard Wronski
CHICAGO — Construction is scheduled to begin in May on the Argo Connections project, a key portion of the massive Chicago Region Environmental and Transportation Efficiency (CREATE) program intended to improve the flow of freight and passenger trains through the congested heart of the Midwest’s rail system.

Federal, state, and local officials were on hand Friday for a groundbreaking ceremony in suburban Summit, Ill., to mark the start of the two-year, $32 million project, which takes its name from the nearby rail yard and former Argo Corn Products plant, now known as Ingredion Inc.

The Argo Connections project is one of 70 projects in the CREATE Program. The project will build a new double-track connection and crossovers between the Belt Railway of Chicago and Illinois Harbor Belt/CSX Transportation line in Summit. This project will connect the new CREATE Beltway and East-West Corridors.

According to CREATE officials, the project will make improvements for the 116 freight trains, six Metra trains (Heritage Corridor) and 10 Amtrak trains (Lincoln and Texas Eagle Services) that traverse the corridor daily. The new double-track connection will allow speeds of 25 mph, providing increased flexibility for dispatchers and reduced time switching train cars destined for local industry. Ingredion handles up to 200 train cars per day. Once complete, this project will allow access to the new main train tracks around Clearing Yard on the new East-West Corridor.

In 2018, the U.S. Department of Transportation awarded $132 million to the CREATE partners through the Infrastructure for Rebuilding America grant program. The federal investment combined with state, local, and private money will fund the $32 million construction for the Argo Connections project.

The Argo Connections is the 33rd CREATE project. To date, 30 projects have been completed, with five more projects under construction and 17 in various stages of design.

“The success of the CREATE program has been tremendous,” said U.S. Rep. Dan Lipinski, D-Ill., who represents the area and who helped secure the federal funding for the program starting back in 2005. “What people really care about is making sure that rail (traffic) continues to flow through the Chicago area.”

Moving freight traffic move more quickly through the area will clear the way for improved Amtrak and Metra train service, said Lipinski, the chairman of the railroad subcommittee of the House Transportation and Infrastructure Committee. “This is something that helps everybody,” he said.