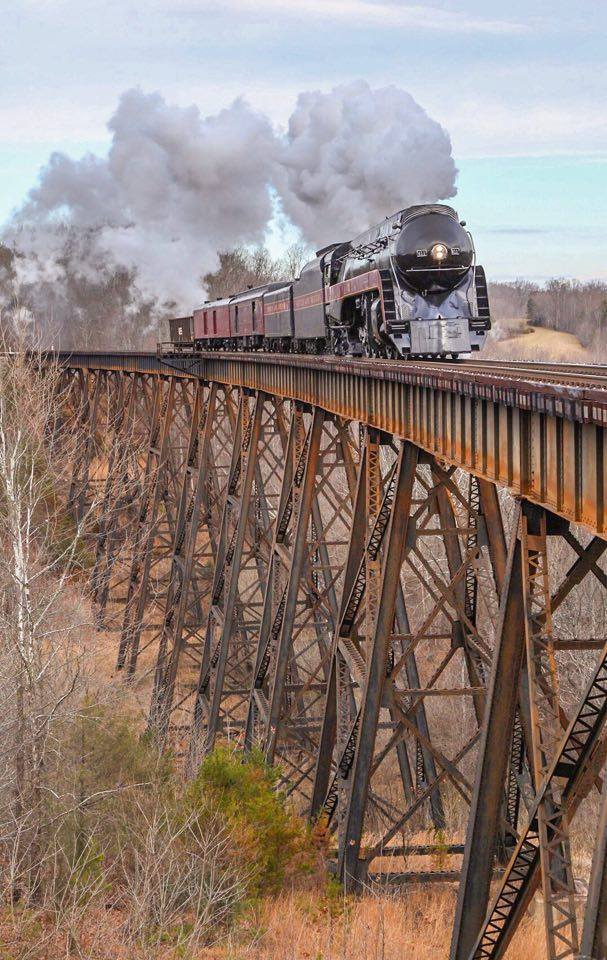 N&W No. 611 rides across a bridge near Goodview, Va., Jan. 6 as it makes its way from Roanoke Va., to Spencer, N.C., for service.
Samuel Phillips
ROANOKE, Va. — The Virginia Transportation Museum is considering letting its centerpiece attraction, Norfolk & Western 4-8-4 No. 611 roam farther from home.

According to Roanoke TV station WSLS Channel 10, Director Beverly Fitzpatrick said the museum is talking with Amtrak about “broadening the base” of the locomotive’s operations.

Fitzpatrick said that after running solely to destinations on Norfolk Southern rails in Virginia and North Carolina for the past two years, “we think the market right now has played out.

“There are just a not a lot of people that are going to ride that haven’t already ridden,” Fitzpatrick said. “So we are now talking to Amtrak about broadening that base to see if we can go a lot of other places. It’s exciting because nobody is saying no. Everybody wants to talk about the opportunities.”

After restoration in 1982, and until 1994, 611 was seen in virtually every corner of the Norfolk Southern system.

According to Visit Virginia’s Blue Ridge, the region’s official destination marketing organization, 611’s economic impact has been $4 million per year for the past two years. Reporters also said that 611 was this week was designated the Official Steam Locomotive of Virginia.

N&W is scheduled for excursions over the three-day Memorial Day holiday between Roanoke and Lynchburg, Va., and Roanoke and Radford, Va., starting Saturday.