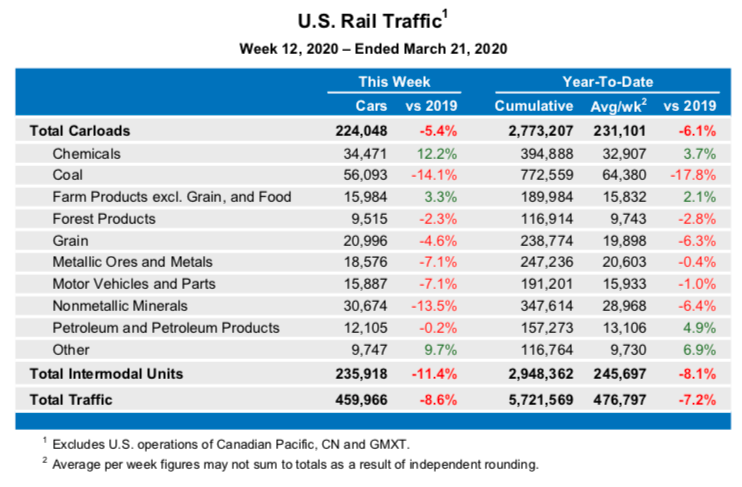 For this week, total U.S. weekly rail traffic was 459,966 carloads and intermodal units, down 8.6% compared with the same week last year.

“Demand for rail service depends on the demand further down the chain for the products railroads haul and on the ability of firms they serve to produce what is demanded,” said AAR Senior Vice President John T. Gray. “Autos are a good example. What with job uncertainty and either voluntary or enforced social distancing for many people, this isn’t a great time to visit new car showrooms, so demand for autos is down. Further, most automakers have suspended manufacturing operations for the time being. As a result of both these factors, rail carloads of autos and auto parts fell considerably this past week.”

“It wouldn’t be surprising to see rail volumes of other categories soften in the weeks ahead as steps taken to limit the spread of COVID-19 continue to impact producers, both here and abroad, particularly those of consumer goods or intermediate products from which those goods are produced,” Gray added. “The good news is that the intermodal volumes of the railroads serving the West Coast ports that receive the bulk of imports from China appear to have plateaued over the last four weeks, indicating that we may have seen the worst of the COVID-19 impacts on the Asia trade.”

— From an Association of American Railroads news release. March 25, 2020.