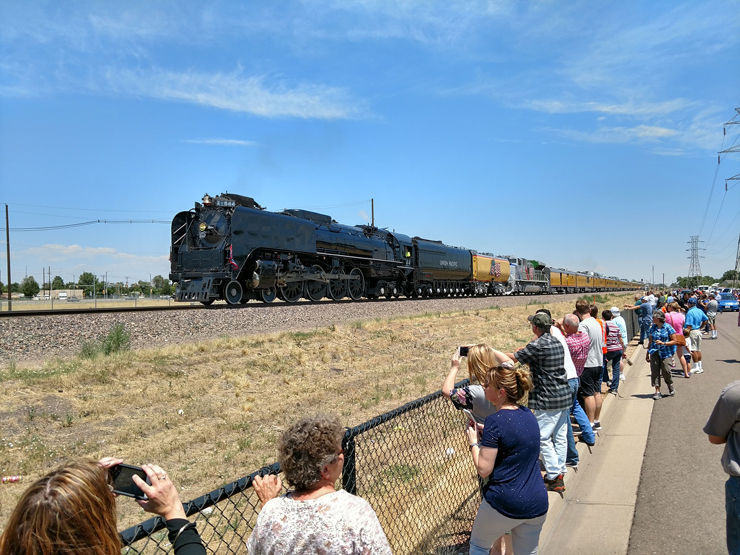 The incident occurred as No. 844 was leading a Frontier Days charter train south toward Denver from Cheyenne, Wyo., when it struck a pedestrian near a grade crossing 16 miles northeast of Denver. The victim was pronounced dead at the scene and the event prompted No. 844 and its steam crew to take a break from powering Sunday’s excursion.

“Our deepest sympathies are with the family and friends of the pedestrian killed in this incident,” she says.

As local authorities investigate the incident, railroad safety groups and those with railroad and law enforcement backgrounds are speaking out about trackside safety.

And while Saturday’s incident near Denver is one of the more high profile incidents in recent history, it’s one of more than 500 similar incidents that take place on U.S. railroads annually, as underscored by Operation Lifesaver’s statement.

“Our thoughts are with everyone involved with this incident. We want Trains readers and railfans to know that trespassing on railroad tracks and property is the leading cause of rail-related deaths in the U.S.,” Operation Lifesaver Interim President Wende Corcoran says. “Approximately 520 people were killed in rail trespassing incidents last year, according to preliminary Federal Railroad Administration statistics. We urge everyone to review our rail safety tips for pedestrians and photographers and help us stop track tragedies.”

Prior to UP’s tragic event Saturday evening, the railroad had already taken extra measures to promote safety around its steam trains. In a dedicated webpage titled, “UP Cares About Your Safety,” the railroad emphasized that the average train “overhangs the track by at least three feet,” urging all bystanders to “stand back at least 25 feet or more from the tracks to avoid debris and steam or being hit by the train itself.”

But even with these warnings, incidents can still happen and retired Norfolk Southern dispatcher and former Memphis police officer Steve Forrest says it’s not possible to cover every bit of railroad when special excursions are operating. He says that railroad special agents reach out to local law enforcement agencies for help with big events, but even agencies with large numbers of officers can’t cover every bit of railroad.

Forrest, who has experience helping with train excursions and serving the public through his career at the Memphis Police Department, believes the public looks at railroads as an afterthought.

“Most people don’t pay them much attention unless they get blocked at a crossing,” he says.

He references a lack of situational awareness in the general public these days, noting other hazards of how motorists fail to merge lanes on highways until the last minute or how drivers oftentimes ignore high water signs, resulting in water rescues.

“But no matter what you do, there will always be those who fail to reason,” he says. “I bet every police officer you talk to can tell you tales of trying to direct traffic at road closures and having people insist they need to have their way.”