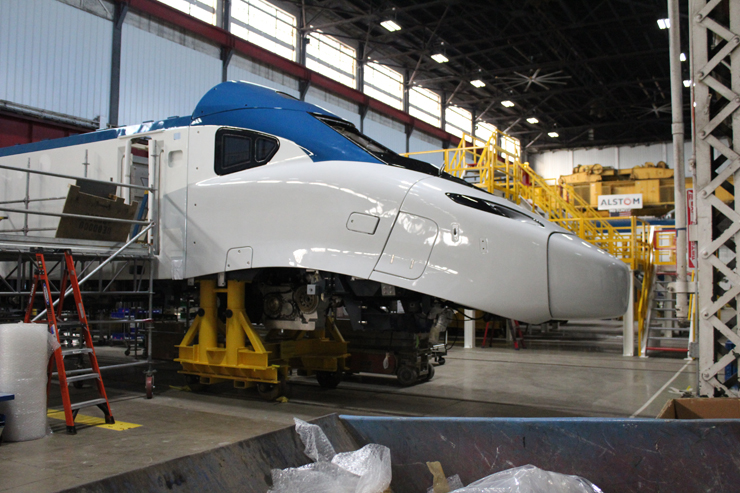 WASHINGTON — A day after Amtrak released a video of its new Acela trainset moving for the very first time, the passenger carrier’s Office of Inspector General released a report warning there is “significant risk” the company will not meet its 2021 deadline to put the new high-speed train into service.

Alstom is currently building 28 Acela trainsets in Hornell, N.Y. and Amtrak officials hope to have the trains in service on the Northeast Corridor next year [See: “Amtrak’s new Alstom-made Acela trainset moves in Hornell, N.Y.,” Trains News Wire, Jan. 22, 2020]. The “Acela 21” program has cost $2.1 billion and is the single largest investment in the company’s 49-year history. But in a report released on Thursday, Assistant Inspector General Jim Morrison says it’s likely that Amtrak will miss its target.

“The Acela 21 program is entering a critical stage if it is to begin revenue service on time,” the report states. “So far, the Acela 21 program has employed some sound program management practices. Nevertheless, management and structural weaknesses still pose significant risks. Foremost is that project delays have eliminated any cushion in the schedule, and multiple indicators point to further delays beyond the planned service launch in 2021.”

According to the report, Amtrak has not upgraded maintenance facilities or information technology systems to handle the new train. nor has it trained more than 1,000 maintenance and onboard personnel on the intricacies of the new Acela.

Alstom originally planned to deliver up to nine trainsets in 2021, but it is unclear if the manufacturer can meet that deadline.

The report notes Amtrak planned on taking an old Acela train out of service every time a new one arrived on the property. But managers tell the Office of Inspector General that plan has changed. No Acela will be taken out of service until there is confidence the new train can run in a specific time slot.

The report concludes construction and testing would have go “flawlessly” in order to meet the deadline. If Amtrak does miss the deadline, it will likely lose revenue because it will not be able to sell additional seats on trains. Each new Acela trainset will have 82 more seats than the original.

The report recommends that Amtrak ensure the managers assigned to the Acela 21 project are given the proper capacity to focus on and finish the project. It also recommends that management come up with contingency plans in case the delivery schedule falls further behind. In comments at the end of the report, Amtrak officials say they agree with the report’s findings and would implement its recommendations.

The report was the result of months of interviews with Amtrak managers in late 2019 and early 2020.