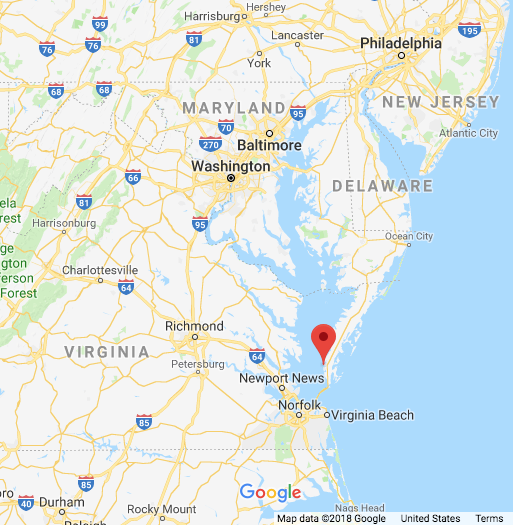 Cape Charles, Va.
Google Maps
CAPE CHARLES, Va. — The Delmarva Central Railroad has notified the Surface Transportation Board that it intends to assume operations on 15 miles of rail line formerly operated by the Bay Coast Railroad. The change will happen before May 29.

Bay Coast has operated the southernmost 70 miles of the former Pennsylvania Railroad line through the Delmarva Peninsula since 2006. Delmarva Central leased the line north of Pocomoke City, Md., from Norfolk Southern in November 2016.

John Heffner, a Washington-based transportation attorney, says that Colonie-Atlantic Co., the rail line’s owner, had reached an agreement with Delmarva Central to operate the rail line between Pocomoke City and Hallwood, Va. There are no customers south of Hallwood. At one time Bay Coast ran a rail barge between Cape Charles and Little Creek, Va., but operations ceased around 2012.

Bay Coast also has customers in the Norfolk–Virginia Beach, Va., area. Heffner said that Colonie-Atlantic is negotiating with Norfolk Southern to continue service there.

The railroad is owned by the Accomack-Northampton County Transportation District, a branch of the counties’ governments. It administered the line through wholly owned Colonie-Atlantic.

Colonie-Atlantic operated the line as the Eastern Shore Railroad, then in 2006 leased it to Cassatt Management, doing business as the Bay Coast Railroad. Heffner says Cassatt Management’s owner expressed a desire to leave the business, which brought about the change in rail service.