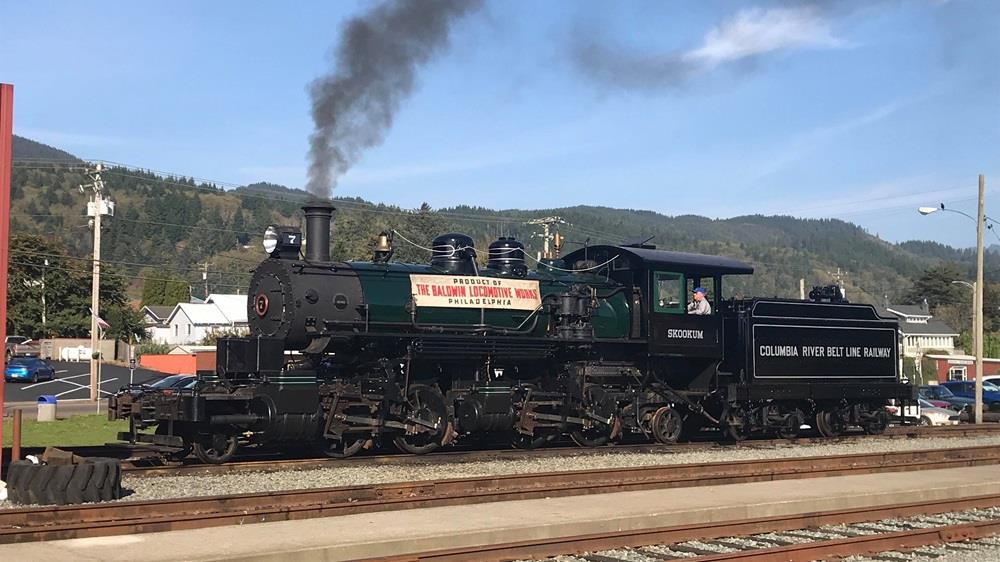 Skookum will run in Oregon once more before relocating to California.
Martin E. Hansen
SUNOL, Calif. — After Trains Magazine’s photo charter in Oregon in March, Skookum No. 7, the “never say die” 2-4-4-2 that was left for dead in 1955 in a Washington forest and resurrected earlier this year at Oregon Coast Scenic Railroad, will make California’s Niles Canyon Railway its home for the rest of 2019.

The Pacific Locomotive Association and its Niles Canyon Railway said Thursday that the rare locomotive will arrive in April and will be the primary motive power on steam operating days throughout the summer. Association President Henry Baum in a statement also said that Skookum will doublehead with the railroad’s Clover Valley 2-6-6-2T No. 4 on select days in May and September. “These double-header weekends will be the only place in the world where two standard gauge Mallet locomotives can be operated together,” he said.

The Pacific Locomotive Association is planning several events to celebrate the 150th anniversary of the first transcontinental railroad, including a Steampunk Festival in June, using real steam locomotives with Steampunk-themed activities, STEAM (Science, Technology, Engineering, Art and Math) educational activities, as well as vendors and artisans.

In July the railroad will re-introduce to the world our restored Southern Pacific No. 9010, the last surviving Krauss-Maffei diesel hydraulic locomotive. A small fleet of which were purchased by Southern-Pacific Railroad in the 1960s and retired and scrapped in 1969. No. 9010 has been restored and is fully operational. A series of excursions will be run using this locomotive. While the KM will be controlling the train, the motive power will be from a second locomotive.

On July 20, Niles Canyon Railway will operate a Moonlight Train in celebration of the 50th anniversary of the first lunar landing in 1969.

Events will culminate in a celebration of the completion of the last link of the transcontinental railroad, from Sacramento to Oakland via Niles Canyon, which took place on Sept. 6, 1869.

Only a dozen tickets are left for Trains’ photo charter featuring Skookum’s final Oregon appearance March 14 and 15 and are available by calling Oregon Coast Scenic at 503-842-7972.