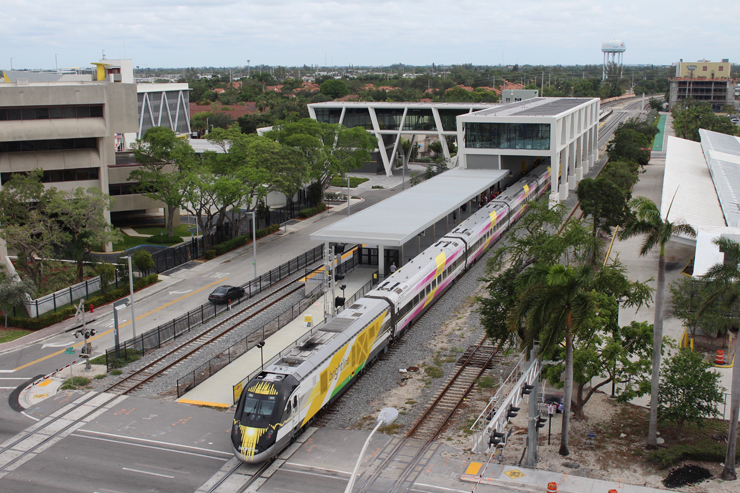 A northbound Brightline train rolls into Fort Lauderdale on May 12, 2018. The service, rebranded as Virgin Trains USA, filed a prospectus for an initial public offering on Friday.
Bob Johnston 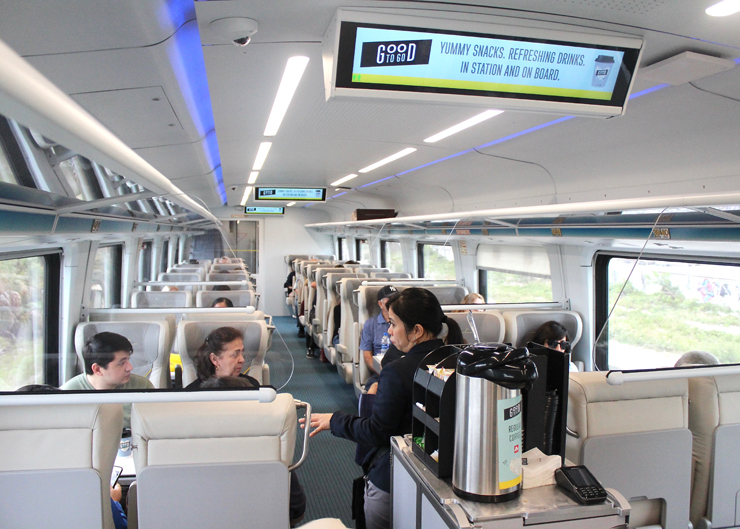 Brightline Smart Class passengers enjoy onboard snacks on May 12, 2018, after the company launched its service to Miami. Friday’s initial public offering provided a look at the company’s finances and plans.
Bob Johnston

MIAMI — Florida’s Brightline announced Friday that it would jettison years of branding to become Virgin Trains USA [see “Brightline enters branding, marketing partnership with Virgin Group,” Trains News Wire, Nov. 16, 2018], but that turned out not to be the company’s only big news: Later Friday, it filed a prospectus for an initial public offering with the Security and Exchange Commission.

The 200-plus page document is available here.

The filing reveals details of the economics of current operations; previously opaque strategies the newly-named Fortress Investment Group subsidiary hopes to employ in financing, constructing, and operating its expansion to Orlando and Tampa, Fla.; as well as building out the Las Vegas, Nev., to Victorville, Calif., XpressWest franchise [See “Brightline bets on Vegas,” Trains, December 2018].

Some highlights from the filing:

— With service extended from Fort Lauderdale, Fla., to Miami in mid-May and frequencies increased in mid-August, Brightline ticket revenue jumped $1.5 million in the second quarter to $2.9 million in the third quarter, on a nine-month operating loss of $87 million.

— The Siemens trainsets for the existing West Palm Beach-Miami service cost $260 million, and the additional rolling stock for the Orlando extension is pegged at a similar amount.

— It appears the Orlando and Tampa build-outs will be concurrent, because the company expects ridership and revenues to “stabilize” by early 2024 after a two-year “ramp-up.”

— The Tampa expansion is expected to cost $1.7 billion; Las Vegas-Victorville is tabbed at $3.6 billion.

— Ridership projections were scaled back about 8 percent from those originally estimated in the Nevada’s “High Desert Corridor Study” because the route will now be built to a lower-speed, 125-mph standard.

— Expected ticket prices are $100 between Miami and Orlando, and $35 Orlando to Tampa.

— Virgin Trains USA says it will seek to operate its brand in other corridors, such as Dallas-Houston, even though that market already has an established high-speed rail entrant.

The filing, which is being underwritten by J.P. Morgan Chase and other major investment houses, provides an underlying reason for attempting to utilize Virgin’s worldwide name recognition to tempt investors in augmenting funds that Fortress’ deep pockets and private activity bond financing could not solely provide. If approved, it will be listed under the stock symbol VTUS on the NASDAQ stock exchange.